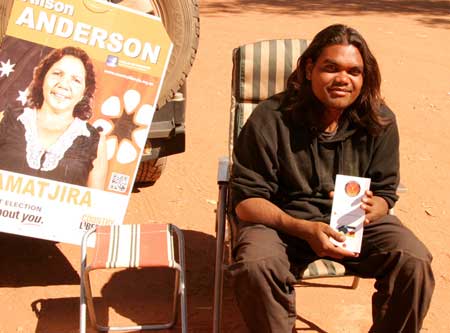 Nicholas Williams (at left) was in Hermannsburg this morning, handing out how-to-vote cards for his father, Warren H. Williams, while stationed in front of Alison Anderson's campaign vehicle.

"I'm campaigning for both," he said, "Warren is my father, Alison is my aunty.  I'm doing it for family."

In practical terms that meant telling prospective voters to put his dad at number one but to give their second preference to Ms Anderson. This went against his father's how-to-vote, where Ms Anderson was in the last spot, with second preference going to Labor's Des Rogers. Nicholas said he didn't mind who won the seat, out of his two relatives.

And the most important issue in his home community? Families have to change and become "role models" for kids, he said. KIERAN FINNANE reports from Hermannsburg.

UPDATE 2.55pm A spectator is dead and two people are injured after an accident this morning during the car section of the race, prompting the...
Read more
ABOUT US
FOLLOW US
©