After Darwin's bombing, the Army made the desert bloom 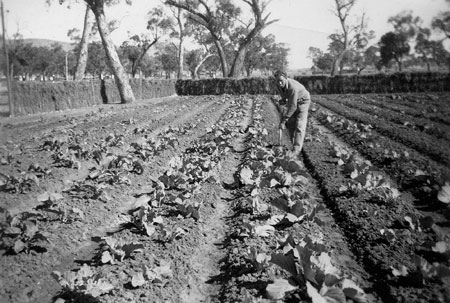 Here's another question to elevate the Can't Do Brigade's blood pressure: Why don't we channel our unemployed into growing produce? The correct answer: "Ohhh, it's going to take decades, mate."

We did, you know, 70 years ago, when the Territory just about became self sufficient in locally grown produce.
The population was 100,000, which remained much the same until the late '70s. True, we now have more than twice that population. Are we growing half the fruit 'n veg we need? Nope.
Is that because governments now prefer handing out sit-down money to mobilizing human resources? The wartime farms grew water melons, lettuce, tomatoes: "They had a go at just about anything."
By 1945 the annual production was 1.7 million kilograms a year, according to historian Peter Forrest, interviewed by the ABC on the anniversary of the bombing of Darwin. That's 1700 tonnes.
"The army almost achieved its goal of making the Territory self sufficient in produce," Mr Forrest recounts.
Cut to Central Australia of today. Almost all produce is imported from "down south", and there are a string of failed ventures while a few enterprises show we could do much better, provided our present day army of unemployed could be recruited to work.

But while the dole is so easy to get, don't hold your breath. ERWIN CHLANDA reports. PHOTO: This garden in 1944 was using water from the showers of the hospital. Alice Springs was self-sufficient in fruit 'n veg. From the Joan Higgins Collection, courtesy Graham Ride.