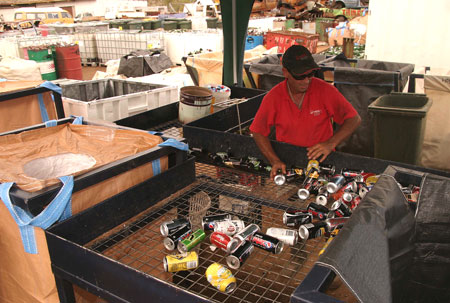 What's an empty beer can worth? The container deposit saga goes on.

While the depot operator says he's still below break-even point, it seems the Alice Springs Town Council's glass crusher – bought from Queensland with a grant from the NT Government – is a white elephant: it can do in just four days all the crushing the town needs in a year.

The council, after negotiations by the Mayor, rejected a joint venture deal with a local business which was buying a crusher, capable of also processing rocks and old concrete.

The deal would have saved the ratepayer more than half a million dollars. Council CEO Rex Mooney says: "There was no formal proposal" and the equipment bought by the local company would not be suitable.

Meanwhile beverage manufacturer Lion Nathan has issued a media release "firmly" rejecting allegations of profiteering in implementing the the NT government's container deposit scheme and describing it as "expensive and poorly designed".

And Environment Minister Karl Hampton says: "The glass crusher belongs to Alice Springs Town Council – any [questions about the] use of the glass crusher and plans should be directed to them."