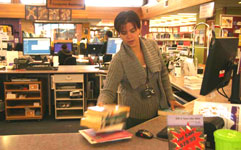 After more than three years on the frontline of child welfare and protection Fred – not his real name – is leaving town. He's taking with him corporate knowledge, which he says has been dwindled worryingly, about matters that are uppermost in the public's mind.

He says he isn't bitter nor angry, rather feels privileged to have developed relationships with a part of the population that is raising profound concerns, both as victims of abuse and neglect, and perpetrators of crime: some four fifths of Fred's clients were Aboriginal.

He spoke in person with editor ERWIN CHLANDA, for an hour and a half, but on the condition of not being named.

Congress board members appoint their own successors – stonewalling has started

The serious issues raised in yesterday's breaking news report about Congress are not new. The leaked letter was dated April 23, 2012. Two months later, what has the Congress Board and / or the Australian and NT Governments done?

Specific questions put by the Alice Springs News Online to the Congress Board President Helen Kantawara have gone unanswered today. Ms Kantawara's response to our  report yesterday failed to address many of the concerns raised.

The News asked her today, in particular, what action the Board is taking about the apparently acknowledged inappropriate use of a corporate credit card by Congress CEO Stephanie Bell (pictured), to which there was no reference in Ms Kantawara's response.

The News also contacted Warren Snowdon, MHR for Lingiari and Minister for Indigenous, Rural and Regional Health, nominated by the Department of Health and Ageing as the Australian Government person for the News to seek comment from. Total silence, in keeping with his recent treatment of other legitimate enquiries by the News.

Meanwhile, the NT Department of Justice says they are enquiring to matters raised about the changes to Congress' constitution.