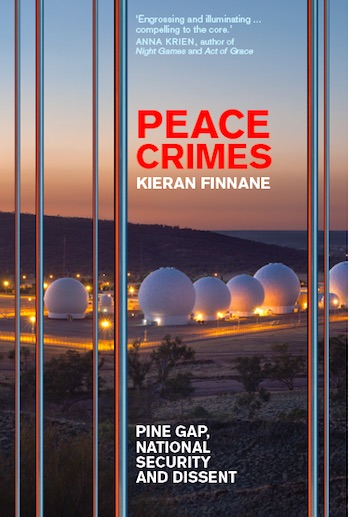 This outdoor event is going ahead under a Covid-19 safety plan. Please help us all to protect ourselves and one another by respecting that there is a limit to numbers on site – 100 – and I do not have exclusive use of the site.

Households can stand or sit together but everyone else should observe physical distancing.

Formalities will be relatively brief – about half an hour.

Limited seating will be provided for those most in need.

Sanitiser will be available at the book sales desk. Cashless sales are requested.

I will regret not to be able to shake hands, exchange hugs and offer refreshments but will warmly appreciate your presence and interest in the book. – Kieran Finnane

‘An engrossing and illuminating portrayal of six activists, a political trial and the secret machinations of the Five Eyes on Australian soil. Compelling to the core’. Anna Krien, author of Night Games and Act of Grace.

At the closely guarded and secretive military facility, Pine Gap, police arrest six nonviolent activists. Their crime: to step through a fence, lamenting and praying for the dead of war.

They call themselves Peace Pilgrims and in Peace Crimes Alice Springs based journalist Kieran Finnane tells the story of their arrest and trial.

The Crown called them a threat to national security and demanded gaol time. Their political trials, under harsh Cold War legislation, tell a story of obsessive Australian secrecy about the Australian military presence on our soil and our country’s hardline response to dissent.

Peace Crimes is a gripping account of what prompted the Pilgrims to risk so much, interweaving local events and their legal aftermath with this century’s disturbing themes of international conflict and high-tech war.

What responsibilities do we have as Australians for the covert military operations of Pine Gap? And what is the role of dissent and protest in the 21st Century?

Peace Crimes is published by the University of Queensland Press (UQP). 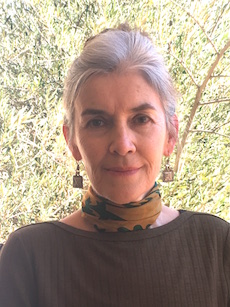 Kieran Finnane is a founding journalist of the Alice Spring News, established in 1994, now publishing online. She also contributes arts writing and journalism to national publications, including Griffith Review, The Saturday Paper, Artlink and Art Monthly Australasia. Her first book Trouble: on Trial in Central Australia was published in 2016.

This event is supported by the NT Writers Centre.