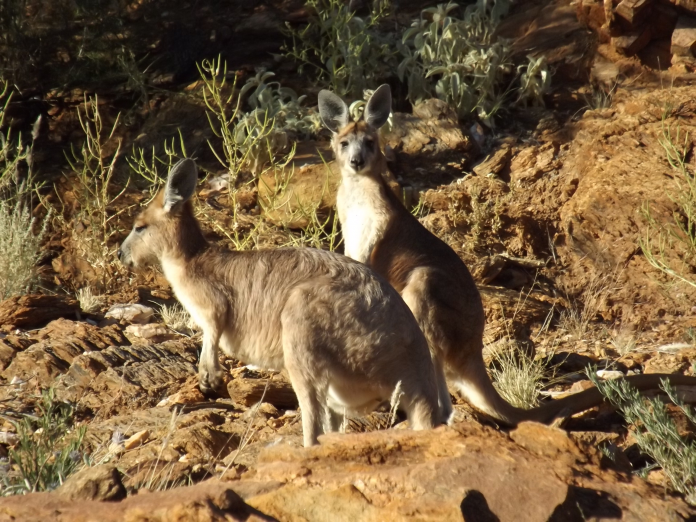 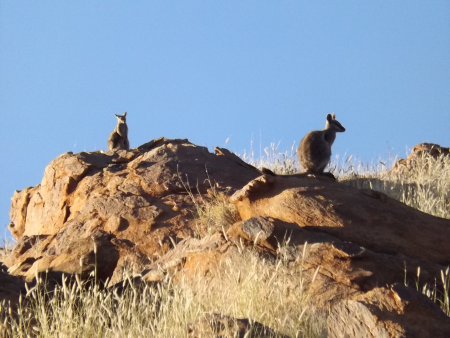 Where does one go to get a good view of endangered black-footed rock wallabies?

Simpsons Gap? Ormiston Gorge? Standley Chasm, or any other gap or gorge in the MacDonnell Ranges one has to travel miles to take your chances of catching a glimpse of these wary creatures from a distance?

What about Heavitree Gap? Rock wallabies used to be readily seen at close proximity at the foot of the range at the former Heavitree Gap Caravan Park and resort but that option is no longer available to most people now that former tourist facility has been converted into the (inevitable) real estate infill development.

How about close to the middle of town? With the onset of mild seasonal conditions the rock wallabies are out in force on Meyers Hill (Tharrarltneme) which can be readily seen sunning themselves on the boulders and rocks of the hillside overlooking the Todd River.

I counted 10 individuals without difficulty (plus a couple of euros, or hill kangaroos) on Saturday morning, dotted all over the slope from top to bottom, giving the impression the hillside in parts appeared to be infested with them!

The wallabies each appear to have their favoured spots, with one individual characteristically sitting on its tail only a few metres from pedestrians passing by on the nearby incongruous boardwalk at the foot of the hill.

It was much the same on Sunday morning, too – as it is now on every day. Habituated to humans, the rock wallabies are largely unperturbed by anybody stopping to watch them or take photos.

Virtually just a hop, skip and a jump from the town centre of Alice Springs, there would be few places graced with the presence of endangered wildlife so readily seen by casual observers.

Olive Pink Botanic Garden is really coming into its own as a major asset for Alice Springs.