Home Issue 6 Cocking stepping down from ALEC, looks back at record
Issue 6Volume 26

Cocking stepping down from ALEC, looks back at record 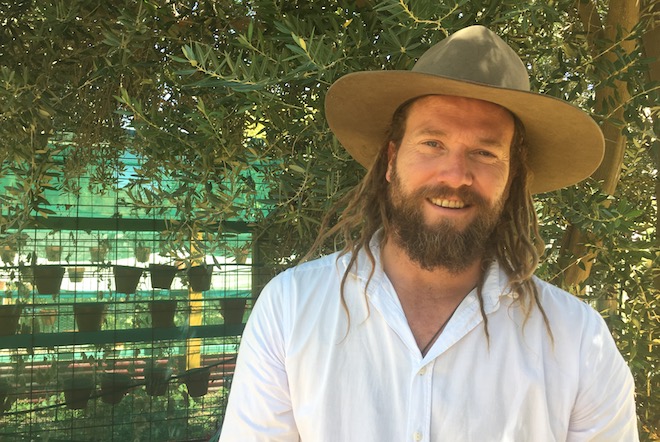 Seven years ago the Arid Lands Environment Centre was facing an existential crisis: the Federal Government – in Joe Hockey’s divisive “lifters not leaners” budget – had slashed their operational funding, then the Giles NT Government followed suit.

In a matter of months the organisation – including its offshoot, CoolMob – went from receiving $185,000 in government support to zero.

It was the community who ensured its survival, raising $100,000 for the cause, says outgoing CEO Jimmy Cocking (above).

An anonymous donor went the extra mile, buying a property in the Gap which became ALEC’s permanent home. They moved in in 2015, their 35th year. The organisation pays rent equivalent to the interest repayment on the donor’s loan. Still, a generous gift.

Apart from Mr Cocking as its dread-locked CEO as well as town councillor, ALEC is probably best known locally for the Community Garden – between Burke Street and Kurrajong Drive on land made available by the Town Council with a peppercorn lease –  and the annual Eco Fair, often headlined by Australia’s most high profile gardener, Costa Georgiadis.

These “outward expressions” of the organisation both developed and have flourished with Mr Cocking at the helm, reflecting his priority for working with people at the grassroots, channelling their energy and skills towards practical, healthier, more sustainable ways to live in the arid lands.

He started in the job in 2007, recently announcing his exit at the end of June, in order to devote himself full-time to his campaign to become Mayor. 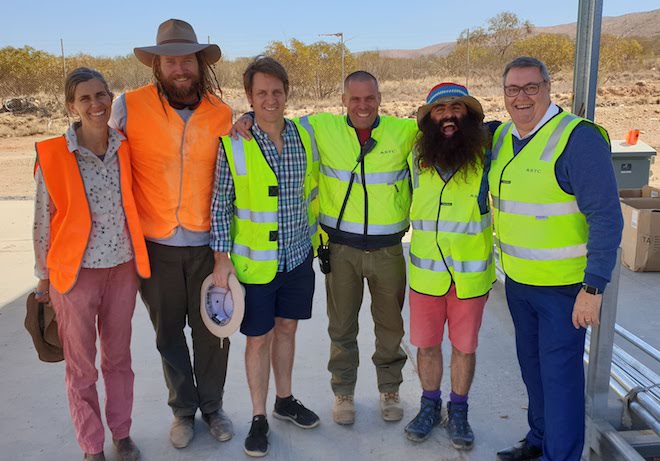 The work ALEC does “cuts across the political spectrum”, he says, noting the number of changes in political stripe of governments while he’s been CEO. However, there’s no denying that it was conservative governments who took ALEC to the brink in 2014, and it was the Gunner Labor government, elected in 2016, that brought the organisation back to “the table”, supporting “a contest of ideas” on environmental policy.

Labor’s restoration of operational funding helped pay for a policy officer (Alex Vaughan is currently in the role), to do that work essential to ALEC’s less public face – engaging with government processes that have an impact on the environment.

ALEC’s advocacy, says Mr Cocking, has contributed to the transformation of the Environment Protection Authority – “still not strong enough, not funded enough but it’s now an independent body.”

They pushed over a long time for an Environment Protection Act – now there’s been one in force since last June.

New mining regulations they lobbied for should provide greater protection for anyone downstream of a mine, including Traditional Owners and Native Title holders, while ALEC has evolved towards a pragmatic position on mining, insofar as they recognise that renewable energy solutions depend on some mined products.

In other areas they can claim to be setting the agenda. They developed the 10 Deserts vision (originally under the heading of “Central Australian Connections”) and were ready to step into the gap left when the Trans-Australian Eco Link project collapsed. Intended to create a north-south wildlife corridor, this had been the subject of an agreement with South Australia, torn up by the then newly-elected CLP Government in 2012 (led by Terry Mills initially, until Adam Giles staged his coup).

Federal money was still available to support such a project. After an initial meeting called by Greening Australia, and with a small grant from the Pew Charitable Trust’s Outback to Oceans Australia project, ALEC brought together a number of partners, including Indigenous organisations in Western Australia.

Over a couple of years they worked together on identifying the key threats to Australia’s deserts – buffel grass, inappropriate fire, climate change, and feral cats and herbivores head the list – and developing some strategic thinking about countering them. When the BHP Foundation was looking to fund a large scale “environmental resilience” project, they pounced.

Their detailed application, led by the Indigenous organisation Desert Support Services in WA, was successful. The foundation paid for a year of project definition and now, three years on, they are well into the work.

Supporting new Indigenous ranger teams across the deserts in NT, SA and WA, including in the Central Land Council region, they are aiming to put in place carbon farming activities, including through the use of “right-way fire”, and to educate remote communities about climate change and its impact on the deserts. 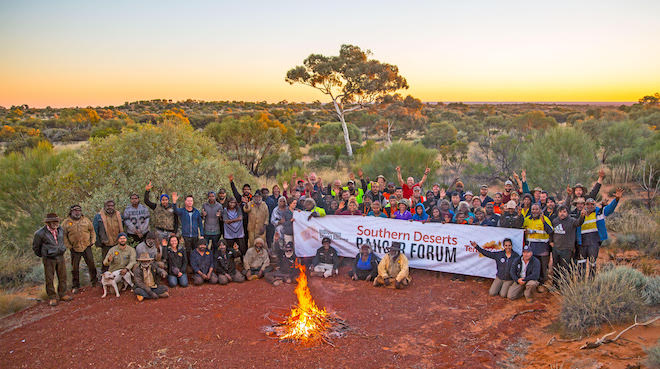 The first Southern Desert Ranger Forum organised by ALEC and Spinifex Rangers through Ten Deserts was held in June 2017 at Ilkurlka Roadhouse in the Great Victoria Desert.  It continues as an annual event, though forced to go online last year. Photo supplied.

As a 10 Deserts partner ALEC is particularly involved in combatting buffel grass, with the goal of a buffel-free Great Victoria Desert. This involves identifying existing buffel infestations, working with land managers to reduce and manage them and preventing new infestations. With this more coordinated approach, they are also testing control strategies ahead of tackling  the threat in other desert regions.

“This work has really changed the game for conservation in the deserts, put them on the map,” says Mr Cocking, although he doesn’t underestimate the “hard slog” in front of them.

The partners come together every six to eight weeks, to update each other on progress, share ideas and lessons learned. The networking was previously by phone hook-up but improved internet services, boosted as part of the pandemic response in remote communities, now allow for Zoom meetings.

Apart from advancing the specific goals of the project, this has really helped to break down the isolation felt by ranger teams and managers in far-flung communities and to deliver training in conservation land management, weed control, even First Aid – “building a cohort of rangers that is a lot more connected,” says Mr Cocking.

ALEC doesn’t take credit on its own for any of this, it’s all about alliances, but “we’ve been there from the start,” he says. “It’s going gang-busters and we’re happy to see the positive impact of all that work.”

Importantly, with governments on board and sufficient funding it is so far avoiding the “boom and bust cycle” of so many projects in the deserts.

While all this was unfolding, ALEC took another step which has become “one of the best things we’re doing,” says Mr Cocking. It has been about “playing to our strengths” after the death of CoolMob in Central Australia.

“We looked at a different model of delivering services, using our skills in gardening, bushcare, garden design and permaculture design, being able to apply those skills to assist households and communities to become more sustainable, while also doing contract work like track building.”

This saw Arid Edge Environmental Services set up as ALEC’s social enterprise arm and it hasn’t looked back, making money which helps maintain ALEC, while applying “a sustainability and social justice lens” to the work they undertake.

Managed by Alex McClean, among Arid Edge activities is work on the Utopia Homelands focused on growing and using edible plants (photos above and below, supplied). It has involved some important lessons about finding the right balance between support and dependency.

Initially they had a worker on the homelands four days a week, setting up garden beds: not the large-scale community gardens of which countless failed examples litter the desert, but small-scale gardens responding to people’s needs and interests.

A nutritionist was also visiting once a month, showing people how to cook the food they were growing. That work has continued over five years and has spawned two cooking cooks, one for adults, one for kids, But with a hiatus in funding the gardening fell over for a while.

Now “we’re looking at light touch models,” says Mr Cocking, which has led to putting the garden support work also on a once a month schedule. “People know there’s still support there” and it’s been enough to restore the momentum. 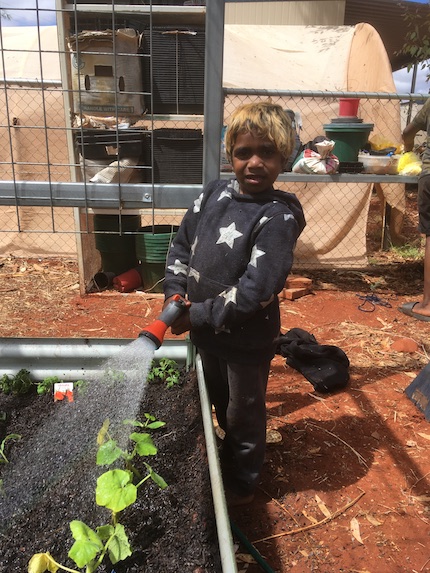 The model has spread into town camps in Alice Springs, eight of them so far, the gardens associated with their community centres.

Arid Edge is also partnering with Tangentyere Council to set up ranger programs in Larapinta Valley and Hidden Valley town camps, with potential employment pathways to the CLC’s ranger units.

At the Ilparpa clay pans and in the lower Todd River, sporadic funding has allowed them to work with Traditional Owners and Landcare volunteers, clearing buffel away from trees to protect them from fire. The short spurts of activity are not ideal, says Mr Cocking, neither for the people involved nor for the buffel-busting. Getting that work onto a more sustainable footing remains a challenge, the necessary underpinning being to get buffel grass declared as a weed.

The hope is to eventually get support for an approach similar to the Gamba Army in the Top End, with the NT Government last year announcing $500,000 for a dedicated workforce to combat gamba grass, with a coordinated approach between government, councils, Aboriginal rangers, and community groups.

A more recent direction for Arid Edge is working with MacDonnell Shire, looking at developing more liveable public spaces on communities. This is especially about mitigating the impacts of the heating climate, “the challenge of our age” and nowhere more so, in Australia, than in remote desert communities – truly the end of the line when it comes to goods and services.

These are some of the ALEC highlights as Mr Cocking looks back on his 13 years in the job, some of the best years of his life, he says, recalling “mornings waking up in the Simpson Desert, doing biodiversity management workshops, or tracking desert skinks out at Newhaven, or waking up around the campfire with ranger groups in the middle of the Gibson Desert.”

He is leaving the organisation with a strong record of achievement but also projects that are just beginning, like the new Community Garden based at the Centralian Middle School in Gillen, and

The most important lesson he’s learned along the way is to have “urgent patience” – knowing that it’s important “to get to where we’re heading but we have bring people with us.”

“Ideas will have their time.”

Below: Local Sikh community and celebrate with ALEC at the Community Garden the 550th anniversary of the birth of Sikhism’s founder, Shri Guru Nanak Dev Ji. •  ALEC volunteers clearing buffel grass away from trees in the ned of the Todd River. Photos supplied. 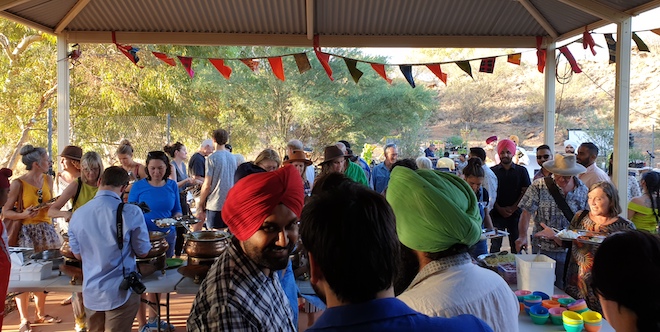 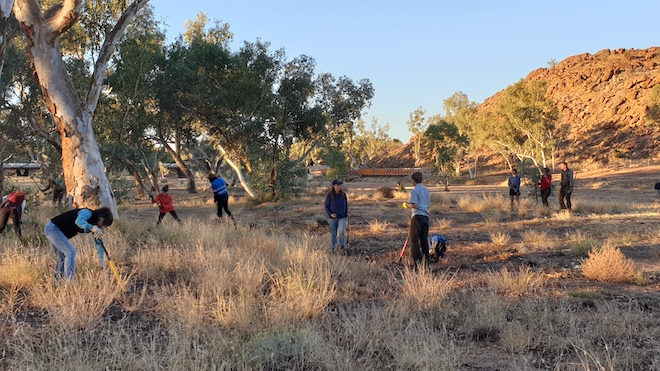 Are we ready for Alice Springs to be the Inland capital? Jimmy Cocking in a guest editorial reflects on the challenges to achieve such a goal.