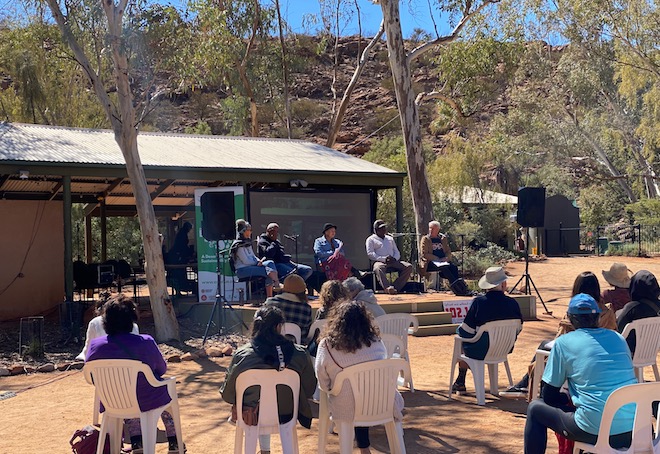 “Climate change is on the tongue, but sinking it into the brain of Aboriginal people is the gap that has to close.”

So said Michael Liddle, one of four speakers on a panel about climate change at the desertSMART EcoFair on the weekend. He’s an Alywarre man and community leader, who developed and delivers Codes 4 Life, a program for Aboriginal men focussing on identity, responsibility and legacy.

“I think Aboriginal people aren’t really stepping up to the mark for understanding and helping assist with climate change.

“I don’t mean to be negative but we all expect non-Aboriginal people will fix climate change.”

One reason that may not be a good idea is that the record of non-Aboriginal people – using  Australian Governments of the last decade as the yardstick, or NT Governments for that matter – has been pretty abysmal.

Another reason, is that they are likely to lead Aboriginal people around in circles.

The audience heard that Aboriginal organisations are again trying to negotiate Aboriginal control over their housing. This has been a demand for as long as I’ve been reporting in central Australia (three decades) and probably longer, meeting with a revolving door of policy responses, ceding degrees of control, taking them back  again.

Norman Frank Jupurrula, Warumungu man, community leader, board member of Julalikari Council, of Anyinginyi Health, and a resident of Village Camp in Tennant Creek, told the audience about how unsuitable much of their housing is: chiefly, it uses too much energy of the wrong kind to keep it bearably cool in summer, and to warm it in winter: “We should use the sun for our energy.”

He is representing Julalikari on the board of Aboriginal Housing NT (AHNT), formed after a housing forum in Darwin in March 2015. The peak body includes Tangentyere (Alice Springs), Kalano (Katherine), Mabunji (Borroloola) and the Land Councils.

Also on the panel from Julalikari was Geoff Evans, who works on community development and engagement. He spoke about the word ‘Julalikari’ meaning ‘belongs to everybody’ and previously Julalikari did indeed own and run Aboriginal housing in the area. The Intervention undid all that, now Julalikari are trying to get that control back again. 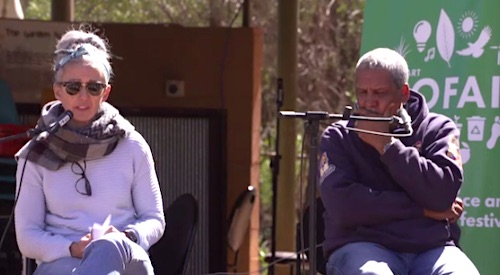 Anne Moody, health policy advisor at Central Australian Aboriginal Congress (above, next to Mr Liddle), spoke of housing as one of the “determinants of health outcomes”. People’s health is specifically affected by higher temperatures; poorly constructed houses and a lack of air-conditioning feed into this.

As part of their advocacy on the issue, Congress supports having temperature (the weather kind) recorded on the death certificates of people dying on very hot days. They are adding their voice to the call for this to happen by Dr Simon Quilty, who works in Alice Springs and Katherine, and a research team from the ANU where he also lectures.

Interviewed by the ABC in May, Dr Quilty explained that “you are much more likely to have a heart attack when the weather is really hot, and that’s complex but it’s because your body is working harder to stay cool. Your heart may need to pump harder to help your body cool itself. If you become dehydrated, your blood becomes slightly thicker.

“So all these things together may contribute to you having a slightly increased risk of having a heart attack.”

He said infections, heart disease, kidney disease and pneumonia were all worsened by heat.

Mr Evans told the EcoFair audience that people in Tennant Creek are worrying a lot about whether the area is going to remain “liveable”, with above 40 degree temperatures for months and months. Alice Springs people might also be asking the same question, he said.

Will we have to join other communities from around the world of people forced to leave their country due to a lack of water, heat stress, the inability to work by day, the inability of the environment to maintain biodiversity?

We are seeing really big changes on an exponential scale over the last 20 to 30 years,  he said, the product of a culture that arrived in this land only 100 years or so ago.

Now we are trying to adapt and to minimise harm, but along with adaptation it is necessary to also talk about climate change mitigation.

The transformation from fossil fuels to clean energy is key and “not too late”, said Mr Evans, who described himself as an optimist.

That would minimise the need to adapt but even if mitigation happened tomorrow, adaptation would still be necessary.

An important practical step, both he and Ms Moody argued, would be an NT Climate Change Act to legislate the move to zero emissions by 2050. This would be a way to hold governments accountable.

To a question from audience member Domenico Pecorari, who is standing for the election as an Australian Federation Party member, he said an earlier deadline for 100% renewables by 2035 (an AFP policy position) is “definitely achievable”.

It’s not a technical problem, said Mr Evans: we live in an area of the world’s best solar resource, we know how to generate the energy, how to build the batteries, it depends on government supporting democratic systems, not big corporation systems.

Coming back to housing, another member of the audience asked the panellists what kind of Aboriginal housing they would like to see.

Mr Liddle agreed that the quality of housing over the last 50 years has been “really disappointing”, too hot in summer, too cold in winter, but he also made a point about the necessity of looking after houses: a house is supposed to have a life span of 40 to 50 years but for many Aboriginal people, it only lasts about six months.

Housing is seen as a white person’s institution, he said, but education around the things to do “to make sure our houses last longer” is clearly necessary.

“When I was growing up, I never heard of climate change,” said Mr Frank. “I feel sorry for my country … I’m very sad to see all my permanent waters dried up. No bush animals, they come out in the wrong season.”

Mr Liddle spoke of what he has learned when he walks with senior law-holders in the Alywarre region (to the north-east of Alice).

Once upon a time, men would gather, spread ochre, sit in one spot, painting, to bring rain to replenish the country, to make food grow. This rain-making was a source of sustainability.

“This was how Aboriginal people lived a long time ago but it has become a bit unstuck now.” 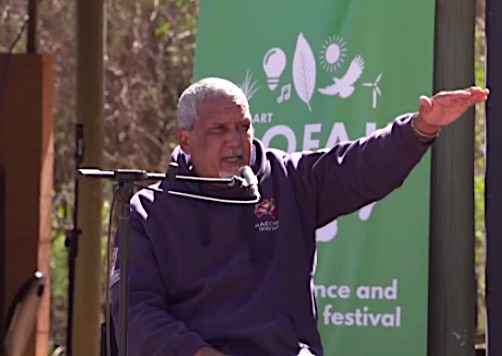 In the last few years there’s been no bush tucker despite the old men sitting down for rain. The bush potato, for example, hasn’t been seen “big and moist” for “a long, long time”.

And sugar bag, once you could get a billycan full of honey, now it’s full up with dirt and eggs, the whole tree looks dry, the leaves are dry.

Apart from carbon pollution contributing to the trouble, Mr Liddle also spoke about the impact of young men dissociating from their country and the practice of their religion, which comes straight from the Altyerre (the Dreaming).

“Country is still rain country, it still belongs to rain people, but where have they gone? There are no people who understand the business associated with rain.”

Westernised lifestyles have had an impact. People may still know where their country is and what their responsibility for it is, but “how can you manage your country when you’re in gaol, who is looking after it?” Mr Liddle asks them.

And if not gaol, it might be the lure of cool green grass bringing them to town, and a KFC and coke, rather than sitting in “a tin shed” – as some houses out bush still are – on a 48 degree day.

There’s no green space out bush, he said, it’s pushing movement into town, where people actually get sicker even while they are seeking a refuge to be more comfortable.

Mr Frank also evoked “my old people before me”. They were leaders, they may not have had [Western] education but they had vision, they put something in place for him.

“Now I  need to put something in place for my kids and grandkids.”

Mr Evans echoed the point, saying that when it comes to struggle, “we stand on the shoulders of giants”. For him the late Jack Mundey was one such. He was best known for his leadership of the Builders Labourers Federation, whose green bans saved many areas of Sydney from development.

He was a model for the kind of grass roots activism that we need now, said Mr Evans, “people power from the bottom up”, bringing together organisations like the Arid Lands Environment Centre (organisers of the EcoFair) and Julalikari, Aboriginal and non-Aboriginal people, trying to hold governments and business accountable, “so they’re forced to care”.

Photo at top, the EcoFair’s climate change panel, live at the Olive Pink Botanic Garden, courtesy Fiona Walsh. The reporter attended the event via webinar; other photos are screen shots.