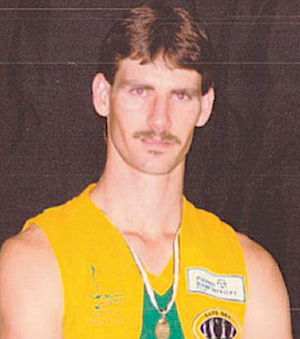 
Graeme Smith (pictured in his football days), a member of the native title organisation Lhere Artepe, says the acquisition of five areas of land in Alice Springs has been “flagged” by the NT Government, but there are no signed deals nor an Indigenous Land Use Agreement (ILUA).

Asked to comment about the strong emphasis given to the proposal by Chief Minister Michael Gunner in his “2020 – The Year Ahead” address to an Alice Springs audience last week, Mr Smith said: “Well, there is an election later this year.”

And Mr Smith rejects allegations that Irlpme, one of the three estate groups that make up Lhere Artepe, was left out of the dealings, as claimed by its chairman, Fabian Conway.

Mr Smith, a Centralian football icon whose playing career spanned more than 200 league games with Pioneer Football Club, says there was a presentation at the Irlpme AGM on December 14 last year when Mr Conway sat beside him.

It was not a “voting AGM” as the estate groups have limited power, although under the Corporations (Aboriginal and Torres Strait Islander) Act 2006 they have the same reporting obligations as does Lhere Artepe, which has a substantial budget and decision making powers.

Mr Smith says the fact that there are four AGMs, only one of which has actual powers, is unsurprisingly a source of much confusion.

Mr Conway, Mr Smith and Peter Palmer are the three Irlpme representatives on the Lhere Artepe board.

Mr Smith says Lhere Artepe has fully recovered from the period when it was under external administration, now with a bank balance of $3.7m.

Policies are being developed in 2020.

He says: “It is proposed that funds be made available to assist members with paying for funerals, attending ceremonies, and assisting young people with education and job development to name a few.”

The money comes from investments, including part-ownership of the Yeperenye shopping centre.

This is not government money, says Mr Smith, but “self-generated income from assets we share”.