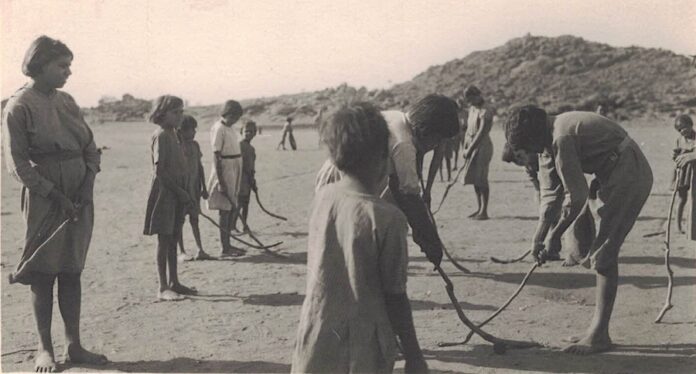 Serious concerns for the destitute Aboriginal children of mixed descent who existed on the fringe of stations, mining camps and various isolated regions in the Northern Territory was first addressed by Sir Walter Baldwin Spencer (pictured).

They received little or no education, had scant access to medical treatment and survived on poor diets.

For a few weeks in 1911 Baldwin Spencer was appointed “Special Commissioner and Chief Protector of Aborigines” by the Commonwealth Government who in that year had assumed control of the Northern Territory.

One of his many recommendations was that the children should be taken from their isolated environments and placed in government institutions.

This proposal was embodied in the 1911 ordinance, which directed that these children were to be forcibly taken without due process and placed in government institutions in Darwin and Alice Springs.

In later years the Rev Dr John Flynn supported the policy of forcibly taking Aboriginal children from their families.

It is surprising that what turned out to be an extremely harsh and traumatic solution to this problem should have been proposed by such an eminent person as Baldwin Spencer.

His experience with Aboriginal people was quite extensive.

He was a scientific consultant on the 1894 Horn Scientific Expedition which traversed Central Australia.

Then on a second visit to Alice Springs, Baldwin Spencer teamed up with Frank Gillen to produce an anthropological work on Aboriginal people in 1899 titled Native Tribes of Central Australia.

In fact, this was one of the first anthropological works about Aboriginal people to be published.

After about 1915 The Bungalow in Alice Springs came into existence.

Aboriginal children were brought in by police officers and left in the care of Mrs Ida Standley.  The Bungalow was originally an iron building behind the Stuart Arms Hotel where the first school teacher, Mrs Standley, began caring for destitute Aboriginal children with the assistance of Aboriginal woman Topsy Smith. 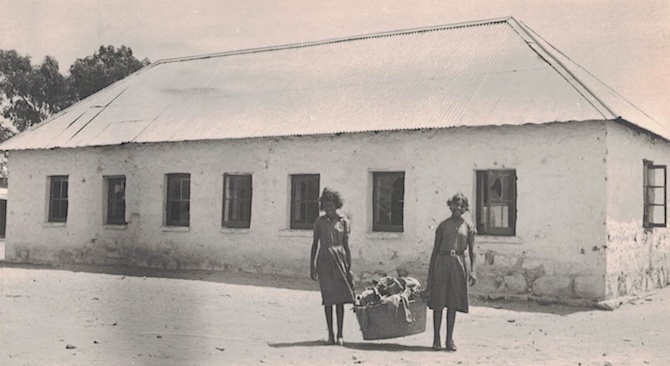 In 1929 The Bungalow was moved to Jay Creek with Mrs Standley and Topsy Smith going with the children.

It was a confusing and difficult situation to manage.  These two intrepid women had to manage multiple trauma.

Eventually in 1932 ‘The Bungalow’ was transferred from Jay Creek to the site of the Old Telegraph Station.

Mothers would try and keep contact with their children.  Alice “Nanna” Costello would ride her camel from Orange Creek, Stuart Well and Doctors Stones to visit her girls at Jay Creek.

Topsy Glynn found work at The Bungalow so that she could be with her daughters Rona and Freda.

When Margaret and Sylvia Gorey were taken near Darwin and placed at The Bungalow their mother Dolly followed them to Alice Springs where she gained work in the town.  She could not visit her daughters.

When Father Percy Smith arrived in Alice Springs in 1933 to be the first resident Anglican priest there were about 100 children at The Bungalow of whom about 80 were Anglicans.

Being a closed institution The Bungalow was not easily accessible.  Police, service personnel, doctors, teachers and representatives of the Christian denominations were the only outsiders allowed access.

Father Smith would visit The Bungalow on Wednesdays and Sundays.

The scene that greeted Father Smith was disturbing.

One Aboriginal woman cooked for this big family and was supposed to be paid six shillings a week.  She was never paid. Father Smith was disturbed by the behaviour of the superintendent.

There was an air of repression and gloom about the place and the children were silent and sullen.

They would hang their heads when spoken to. Happiness was a hard commodity to find.

The treatment of the children was of a poor standard and not in keeping with what had been laid down by government regulation.

Girls of all ages from babies to adolescents slept in the same dormitory, which was poorly ventilated.

The boys slept in a separate dormitory.  Both dormitories were stifling in summer.

Substantially the school was closed and there was no trained teacher on the staff.

Children were only put in the school by the superintendent, Gordon Freeman, when a “tip off” came from the town that a government official was in the vicinity.

It came to Father Smith’s attention that some adolescent girls were being abused by the superintendent.

Freeman would go into the girls’ dormitory after dark.  If they knew he was coming some girls would get out of the dormitory and literally “head for the hills”. They would hide in the hillocks behind the dormitory.

A famous letter written by teenage girl Tilly Tilmouth in February, 1934 and addressed to the Deputy Administrator of the Northern Territory, Mr V Carrington was smuggled out of The Bungalow by the butcher boy and handed to Carrington by the NT police.

Carrington lived at The Residency in Alice Springs. When Father Smith became aware of this letter, he met with Carrington assuring him that whatever Tilly Tilmouth had said in the letter would be true.

Tilly’s letter was believed by the authorities, which is amazing in itself.

Other girls were interviewed with statements being taken. Their statements were believed.  Action was taken with Freeman being imprisoned and removed as superintendent.

It is to the credit of the legal authorities in Alice Springs that they acted in the way they did and saw to it that justice was done.

A new superintendent was appointed and things greatly improved.

Two trained teachers from the South Australian Education Department were appointed to “The Half-Caste School, Alice Springs” which was the official title.

It was still eighteen months before Father Smith could induce the children to talk to him, and then they would only speak in whispers.

However, Father Smith acknowledged that the children weren’t only withdrawn because of the conditions at The Bungalow, but also many were traumatised because they had been taken from their mothers, their family ties were broken and no further family association was allowed.

A number of these children later in life used the word “stolen” to describe their circumstances as a way of telling the outside world the severity of their suffering.  Many suffered deep psychological and sociological trauma for the rest of their lives.

Father Smith would get a loan of Gordon Lines’s truck and take the children on picnic outings.  Some of the children would come down to Middle Park to meet him and pile onto the back of the truck for an extra ride.

The Community of the Holy Name (CHN) in Melbourne is an Anglican religious order for women.

They took an interest in the children at The Bungalow and would send parcels of clothes and toys.

In 1939 Sister Kathleen CHN visited The Bungalow and got to know the children.  Her visit inspired both the children and the Aboriginal women.

For entertainment the boys would ride wild donkeys or spin along curled up inside old tyres while the girls would play makeshift hockey using a tennis ball which they hit with mulga sticks.

The girls also made dolls from sticks and string. It wasn’t until the 1950s that Mrs Geraldine Kennett and Mr Neil Hargraves organised proper competition hockey for Aboriginal girls in Alice Springs.

“Mrs Standley, Bob Laver, Pastor Kramer, Alf McGowan, children and half-caste people and children. Topsy Smith is up the back, seventh from the right.” Caption by the State Library of South Australia.

Living in such an institution made these children seem even more apart from white Australia, and the white people in general had scant regard for them.

Father Smith resisted all this and became the trusted friend of the Bungalow people.

He helped some adults get pensions and child endowment, and would speak on their behalf whenever he could.

He arranged for Joe Croft to go to All Souls School, Charters Towers.

A number of these Aboriginal children went on to be high achievers becoming an example to their own people as well as showing white society that many of their attitudes about Aboriginal people were misconceived.

Such high achievers from The Bungalow were Joe Croft, Rona Glynn and Freda Glynn.

Most of the Anglican children went to Mulgoa, a Church Missionary Society (Anglican) home at the foot of the Blue Mountains in NSW.

After the war the placement of these children, who were all wards of the state, was managed by Mr Frank Moy, Director of Native Welfare in the Northern Territory.

A number of the boys including John Moriarty went to St Francis’ House in Adelaide while most of the girls went to St Mary’s Hostel, Alice Springs.

By the 1950s when it became necessary to remove Aboriginal children from their families the procedure now followed due process of law, which requires that all children in difficult family circumstances have to be charged as being neglected.

The Bungalow closed in about 1963.

The taking of Aboriginal children from their families without due process is a deeply sad, traumatic and alarming chapter in the history of Australia’s dealings with its original inhabitants.

The National Inquiry into the Separation of Aboriginal and Torres Strait Islander Children from Their Families of 1995-96 is tantamount to that.

This episode in Australia’s history must not be allowed to be forgotten or put aside.

The story is here again. A professional and extensive account needs to written about The Bungalow and its impact.

John P McD Smith is the chair of the St Francis’ House Project.