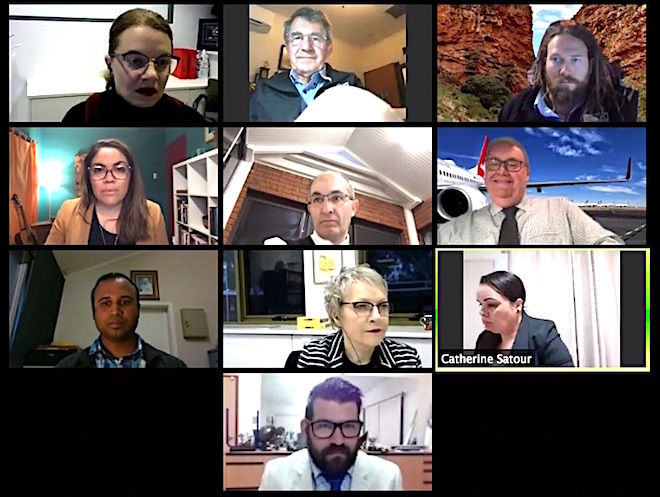 With the Mayor and Deputy out of the room, due to their conflicts of interest as candidates in the August Legislative Assembly election, council could get on with business as usual, right?

You couldn’t be more wrong.

The situation was entirely predictable from the moment Deputy Mayor Matt Paterson announced he would contest the election for Territory Alliance. With Mayor Damien Ryan already in the same position (for the CLP), this would leave the chair vacant on crucial issues – like the NT Government’s move to compulsorily acquire one of council’s major assets, Anzac Oval, for its national Aboriginal art gallery project.

Mayor Ryan has declined to define his conflict, but at least DM Paterson articulated his stance in a detailed media release.

Last night the council  was simply not prepared for the looming eventuality. And in the absence of a chair the meeting descended into a shambles, cleaving along the usual political lines and with accusations flying.

Meanwhile, the public has been left in the dark on a matter of high interest to them – how is council  going to respond to latest salvos from the NT Government, not only the compulsory acquisition but the political attacks that are coming with it?

The open session of council lasted for four hours, finishing around 10pm, and after all that, we are none the wiser. The situation was to be discussed again early this morning – behind closed doors. 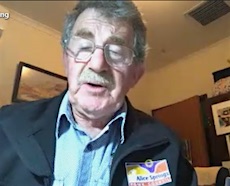 The first time last night that the two political candidates left the room (actually a Zoom meeting) was for a discussion of power upgrades at Anzac Oval – raised by Cr Glen Auricht (left).

This business was actually resolved – in light of the uncertain future ownership of the oval, the upgrades will be deferred, despite them being a number one priority identified by council’s Sports Facilities Advisory Committee.

Apparently when the big lights are on, if someone in the canteen plugs in the kettle, the whole facility can lose power. It’s been happening since 2012 and will go on happening for the next … who knows how long?

The discussion foreshadowed the difficulty that would erupt later on: who would chair the meeting?

Councillor Marli Banks argued that the chair of Technical Services Committee has always stepped in as next in the line of command.

CEO Robert Jennings wanted to be referred to such a provision in the legislation.

Cr Eli Melky said it was a Technical Services matter under discussion.

Cr Banks nominated him to chair.

Cr Jimmy Cocking said he would support the nomination “in this instance”.

On a show of hands Cr Melky was then accepted as chair.

The next test came with the discussion of two letters attached to the CEO’s report: one from Minister for Territory Families Dale Wakefield referring to the other, from the CEO and Chair of the native title body corporate, Lhere Artepe, lending its support to the government’s gallery project for the Anzac Precinct. 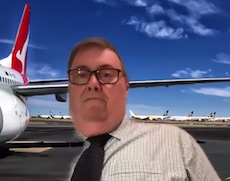 “Thank you, I’m out of the meeting,” said political candidate Ryan  (left)– without making any attempt to ensure the meeting had a chairperson.

A chair for the discussion was clearly needed.

Cr Jamie de Brenni suggested that it be the CEO.

Cr Auricht then nominated Cr de Brenni to chair, but not without some pointed commentary aimed at Cr Melky.

He referred to not wishing to create a conflict of interest for Cr Melky, who “was in receipt of a letter from Traditional Owners”. (This was apparently a reference to the letter from Mparntwe custodians in January 2019, which pulled the plug on their support for the gallery in the Anzac Precinct.)

Mr Jennings said Cr Melky would make his own decision about a conflict of interest. He asked for a seconder for Cr de Brenni as chair. Cr Price obliged.

However, Cr Banks challenged the process, believing a precedent had been set to appoint the chair of Technical Services (as explained above).

Mr Jennings again wanted to be guided by the Local Government Act and appealed to Director Technical Services Scott Allen for input.

Cr Melky said was a matter for the Elected Member group to chose their own chair; he agreed with Cr Banks (left, archive photo).

But he also said he was “blindsided” by Cr Auricht’s suggestion that he had a a conflict of interest, which he refuted strongly.

He was happy to support Cr de Brenni as chair “but not because I have a conflict”.

Cr de Brenni then poured oil on the fire, saying he appreciated where Cr Auricht was “coming from”.

Cr Price said she wanted to get through the process so they they could discuss the matter at hand – “the most important part”.

Cr Cocking mused aloud about whether he had a possible conflict as a member of the board of Desert Knowledge Australia, given that the DK Precinct is “increasingly being mentioned as a potential site” for the gallery; he might have to withdraw.

Cr de Brenni couldn’t see any conflict for him, contending that council’s “only involvement” in the gallery saga is as owners of Anzac Oval. He supported him to stay.

Cr Banks pushed for resolution of the chairing issue both for last night’s meeting and ongoing – it’s not as if it’s not going to happen again.

Mr Jennings said a report from officers would address that very matter, but meanwhile they needed to nominate a chair for the current meeting. 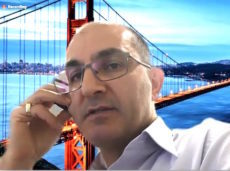 Cr Melky (left, archive photo) was still smarting: “Cr Auricht, you’ve put a target on my chest, and I don’t appreciate it.”

He pointed out that he was happy to support Cr de Brenni even though he is Vice-President of the CLP.

More oil on the fire.

Cr de Brenni called a point of order: “Cr Melky, you have to have a good look at yourself when you start bringing personal issues in.”

“You brought it up,” retorted Cr Melky.

More voices, angrier, all talking over one another – entirely against the necessary protocol of a Zoom meeting.

Mr Jennings called them to order more than once, finally raising his voice: “Elected Members! …   Can I please have order?”

Cr de Brenni withdrew his nomination: “It is a personal matter now.”

Cr Auricht, in a belated attempt to mend bridges, said he was happy for the nomination to go back to Cr Melky.

Cr Banks wanted to “take personality out of it” but for the sake of consistency nominated the chair of Technical Services, in this instance Cr Melky. 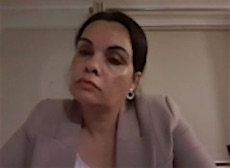 This was seconded by Cr Catherine Satour (left, archive photo).

Cr Melky in “large part” did not want to participate in this “absurd” election, which “plays into the hands of those who are personally attacking me tonight”.

“My point is not a personal attack, it’s a perception,” replied Cr Auricht, repeating his comments about the letter delivered on behalf of custodians to council. (Many a councillor receives and tables correspondence from constituents – why is this instance different?)

“That is way out of order!” said a furious Cr Melky, who asked to take a 10 minute recess.

Mr Jennings told him stay in meeting, and attempted to take a vote on who should chair.

This was when the process really broke down.

Cr Banks voted against. What about Crs Cocking and Satour?

Cr Cocking expressed his reluctance to take part in the process.

The Executive Assistant then advised that Cr Melky had removed himself from the meeting.

That seemed to obviate the vote, given only one nominee was “in the chamber”, said Cr Cocking.

However Mr Jennings insisted that he needed Crs Cocking and Satour to vote.

Cr Cocking again expressed his disapproval of the process when councillors were already scheduled to meet on the Anzac Oval issues in the morning. He also wondered whether the debate might not be deferred, given that the person who raised the matter was no longer in the meeting.

Mr Jennings (left, archive photo) said he nonetheless needed someone in the chair and asked for Cr Satour to show her hand, one way or the other.

Cr Banks then intervened, proposing a recess to allow other Elected Members, that is Cr Melky, to return. There had been an “unfair attack in the chamber, it was not mature, there is nothing mature about any of this”.

When the meeting resumed, Cr Melky said he did not wish to participate further in the process,  “defamatory comments” had been made and he would follow up in the morning with a “formal process”.

Cr Auricht said it was all  “rather unfortunate” with “Elected Member against Elected Member”, “not my intention at all”.

He  took up CR Cocking’s suggestion, that all discussion be deferred until tomorrow.

Cr Banks called a point of order: “Tomorrow will be the same as today.”

Cr Price lamented that everything had become “personalised” and was happy to defer.

Only Cr Banks spoke against this “matter of absolute public interest” being dealt with in a “closed discussion”, without anyone being able to see “the circus going on here”.

Only she and Cr Melky raised their hands against the debate being deferred.

Political candidates Ryan and Paterson returned to the meeting. I could take you through the agonising discussion of council’s Conflicts Management Policy, for which Candidate Ryan absented himself while Candidate Paterson took the chair.

Suffice it to say that the policy was finally approved, with the CEO directed to provide a copy to the NT Government in response to their “request for advice” – a polite way of putting it –  on how council would manage its conflicts of interest.

Just a reminder here that it all began with Mr Ryan’s CLP candidature and the unseemly political jockeying in response, particularly by the Chief Minister and Minister Wakefield, that has consumed what should have been held well above the fray – the creation of a national Indigenous cultural institution here on Arrernte Country.