In a normal season the space behind Brendan Heenan is filled with caravans.

A multi award winning caravan park with 340 sites and 52 cabins, well into the season without a single visitor – that is a truely scary sight in a town whose commercial  life depends on tourism.

The industry pioneer and decades long participant in its promotion says if the state borders are not open by July then he,  all other Alice caravan parks, the pubs, clubs, restaurants, accommodation, tourist attractions, souvenir shops won’t have a 2020 season.

As the high visitation period ends at the beginning of October these businesses will have no significant income until April next year.

By then it’s likely that many businesses will have hit the wall.

Yet Chief Minister Michael Gunner, apart from his professed aim of protecting the Territory’s people, has not articulated the conditions for re-opening the NT except to say it will be the last COVID-19 measure lifted.

This will keep out the bulk of the 400,000 visitors who spend money here every year.

“The trouble is Mr Gunner is not going to open up the borders until everything else is open,” says Mr Heenan, born and bred in Alice Springs, 80 years old.

In his view international visitation is not expected to return much before 2022 “to get back to where we were” – depending on the state of the pandemic, and the need for visitors to quarantine.

Now all stops must be pulled out to encourage Aussies to visit their own country.

“About nine million people go overseas every year from Australia. And they spend 50 billion dollars,” he says.

Tourism Australia, which usually spends money to bring visitors to Australia, is starting a TV campaign to get Australians to look at their own country.

But Tourism NT and Tourism Central Australia are slow off the mark to make their pitch.

Mr Heenan says he is not aware of any new local initiatives. TCA’s next meeting is due on May 28.

Its president, Dale McIver, has resigned to stand in Braitling for Territory Alliance in the August election, and the organisation’s CEO Stephen Schwer has also departed.

It won’t be easy – many young people have lost their jobs and have no money to travel, says Mr Heenan.

The grey nomads are likely to be “at least 50%” of the potential visitors, plus families who are still working, especially between the end of the school holiday and the end of the season.

“They are itching to go, to get out of the cold winter weather down south.”

Would roadhouses be able to survive for the best part of a year without income?

The current break is a lull when upgrades and improvements can be made, with JobKeeper money coming in, says Mr Heenan.

Meanwhile, the rest stops on the Stuart Highway are mostly ugly and misused by travellers for overnighting, leaving behind their rubbish and excrement, he says. 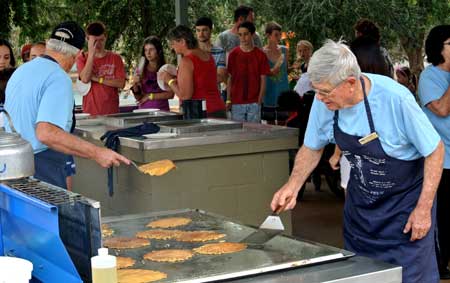 Most people able to travel will be keen to spread their love also to the victims of the drought and bushfires.

The Sunday morning pancake treat is on hold.

Is the local industry coming up with fresh attractions?

“No-one does any Aboriginal Cultural Tours any more,” says Mr Heenan. “Not that I know of. We should be in the forefront of all that, with our Indigenous people, all around the Centre here.”

He says that’s never been the region’s strong point: For example, the show at the now closed Heavitree Hotel next-door to Mr Heenan’s park featured mostly Aboriginal people from Queensland.

“We can’t find anybody. Which is ridiculous. The land council and Tangentyere should be at the forefront of that.”

Mr Heenan says a closer involvement in tourism of Aboriginal people at The Rock should be encouraged, perhaps also acting as guides for groups climbing the monolith and telling them about its cultural significance.

He says the Ayers Rock Resort and Alice Springs should be working together – they are not right now, with most flights bypassing the town.

Alice being the hub is a concept now gone, but fostering a small airline – such as Air North – flying between Adelaide, Alice, The Rock and Darwin could regain some of these opportunities.

Another initiative for Alice Springs could be the opening up of the southern flank of the Mount Gillen range, still within the immediate vicinity of the town.

“I’ve done it, climbing up the eastern side of The Gap and walking along the ridge to Emily Gap. And on the other side I climbed up Mt Gillen and walked along the range to The Gap.

“Or you can walk all the way from Honeymoon Gap. These are opportunities we can offer,” says Mr Heenan. “It’s beautiful up through there.”

The lock-down of The Centre’s national parks, including most of the West MacDonnells, while parks in the Top End are being opened up, is mystery to Mr Heenan.

Locals would no doubt like to “visit Standley Chasm for a day visit, go out to Glen Helen for lunch. But the main thing we’ve got to worry about is getting these borders open”.

Is TCA acting as a pressure group influencing the government?

Potentially yes, says Mr Heenan, and also groups such as banks which in turn could influence the Federal government.

“All of us work with banks. We should be talking to them. Get them to talk to their head offices to put pressure on the Federal, state and Territory governments to get the borders open.

“Businesses will have to resume repaying their loans in October. It’s in the banks’ interest to get businesses back on track.”

“We can lobby our government, as can the Chamber of Commerce.

“Start bombarding the Chief Minister. Why should we be last to open up our borders? We should be one of the first ones.

“We open up the pubs and everything else. We won’t have a tourism industry here if we are not open by July.”

Mr Heenan provided the following information from the Caravan Industry Association of Australia: Caravanners and campers are seven times more likely to taken an immediate holiday once restrictions are lifted. More than 500,000 travellers are eager to hit the road within the next two months.