ABOVE: The turn-off from the Stuart Highway to Kilgariff. BELOW RIGHT: The open drain pictured from the edge of the highway. 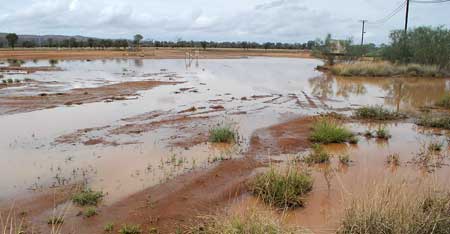 The Alice Springs Town Council should attach conditions to the takeover from the NT Government’s Land Development Corporation (LDC) of significant parts of the Kilgariff suburb, Stage One.

The council’s Technical Services Director Scott Allen is recommending that the ownership of the “Main Open Unlined Drain which traverses the Stuart Highway and Colonel Rose Drive” should not be accepted. The government agrees.

Due to the flat nature of the site, the storm water infrastructure inside the sub-division contains no pits and pipes. To fix this would cost $650,000, says Mr Allen.

He recommends this internal drainage network should remain under the care and control of the NT Government until the estate can be assessed following a one in five year rain event. The government has accepted this.

Mr Allen’s report to Monday’s committee said the Government should pay $430,000 for the “approximately 1967 lineal metres of sealed carriageway” which are not expected to last the 25 years as contracted. Again, the government has accepted this.

It also accepts responsibility for fixing “pooling of water on the corner of Stuart Highway and Norris Bell Avenue” and “flooding of Colonel Rose Drive”.

The next full council meeting is likely to make a decision on Mr Allen’s recommendations.

The LDC is currently beginning to build Kilgariff Stage Two.

We have asked the LDC’s CEO Tony Stubbin to comment.

A spokeswoman for the Land Development Corporation (LDC) provided the following comment:

“The Department of Infrastructure, Planning and Logistics (DIPL) is dealing with Alice Springs Town Council (ASTC) on the matters raised.

“DIPL control the existing roads and drainage infrastructure within Stage 1.

“The main open unlined drain was constructed by DIPL and is outside the development area of Stage 2 of Kilgariff.

“Land Development Corporation is progressing the planning and design for Stage 2 and will consult with DIPL and ASTC in this process.

“LDC recommends you approach DIPL for comment on the matters posted 13 May 2020.”

We have requested comment from DIPL on May 14 and will report it if and when we receive it.