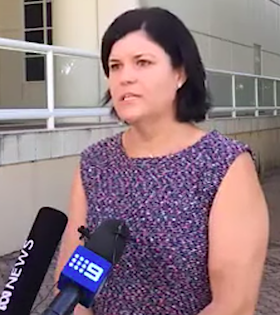 The first casualty in a war is truth. In the Territory, when there is a crisis, it is transparency that gets the boot, although it’s at a pathetic level at the best of times.

We’ve learned to live with minor government hiccups such as running up a debt the size of an entire year’s budget (Gunner), or flogging off the Darwin port to the Chinese for a pittance (Giles).

But COVID-19 is a matter of life and death, and the public’s vital trust in the people managing the pandemic depends on how they are treating us.

The case of an Alice Springs woman in her 20s illustrates this: Her name is certainly not to be made public, but the few morsels of information we’ve been given are not good enough.

She was in the UK and tested positive on Thursday this week.

Her fellow airline passengers on two flights are not being examined.

“Under national medical guidelines, contact tracing on her flight is not required due to the delay between her return and becoming unwell,” we’re told by SecureNT.

But the Minister, Natasha Fyles, explained it succinctly: “There had been enough time from when the person took ill up to their travel date, that it was not necessary for … for that contact [tracing] to take place, clinically that’s around 24 hours, and so we saw that with one of the cases in Top End last week as well, that the time from when the person travelled to when they got ill … clinically the advice was that [there was] minimal risk to the community and that’s why they didn’t do that contact tracing.”

All the 22 cases to that point have been “acquired overseas or interstate,” says SecureNT.

We asked: “Where did she acquire the illness? Was it overseas or interstate?”

The reply: “As there is no medical need for contact tracing on flights, the woman’s personal travel information will not be provided publicly.”

The woman clearly was on two flights – one international and one domestic.

There are some troubling facts that may impact on this case.

“One in four people may be asymptomatic carriers – people who are contagious but not physically sick. These carriers are thought to play a significant role in the virus’s spread.” (Business Insider Australia, quoting a health source.)

Could the Alice woman be one of them? Or may she have been in an asymptomatic phase whilst being infectious?

“People who might have been in contact with a confirmed case are being asked to self-isolate for 14 days. A small number of people may have been infectious before their symptoms developed. It appears transmission can take place at least 24 hours before any symptoms appear. Evidence suggests that a person can spread COVID-19 infection from about one day before they first develop symptoms.” (NSW Health.)

“Although not yet confirmed, Chinese health authorities believe the virus can be transmitted before symptoms appear.” (Al Jazeera.)

No doubt there are hundreds of similar references.

“The woman … has been in self-quarantine since returning from overseas,” says SecureNT.

Under what circumstances? No information.

Meanwhile, Ms Fyles is limiting access to her media conferences to Darwin journalists.

The Alice Springs News has asked to be able to put questions to her, by phone, for example.

Ms Fyles’s minder responded: “As it stands across all media events, all ministers and all portfolios you need be in attendance to do so. This applies to all media outlets, and generally speaking, is how all press conferences work.”

We are not in normal times right now. We are all supposed to be avoiding physical congregations and there is no technical reason not to, and every good public health reason to, conduct the media conferences by Zoom, Skype and so on, including the good old mobile phone.

This is the way the whole globe is being encouraged to do business these days. The News would receive equal treatment.

Then the minder offered: “If you have questions or require clarification post event [that’s the news event] please send through an email to me if questions are relevant to the minister specifically, or if operational to her departments or the public information group.”

That’s when we asked the query above about the Alice Springs woman.

We also asked Ms Fyles to state the regions / towns where the 2,273 NT tests at that time had been conducted; to outline the program of testing in Central Australia and why it is that only less than 1% of the Territory’s small population has been tested so far.

What is the percentage of people tested in countries most successful in fighting COVID-19, we asked.

Ms Fyles did not answer a single of these questions? Why?

“These are operational questions,” claimed the minder.

The following are clearly operational issues Ms Fyles dealt with during her Darwin media conference on Thursday: Tough control measures, health staff working around the clock, “standing up” the Howard Springs facility for patients who don’t need hospital care, drive-through pandemic clinic, roadblocks keeping out virus carriers from the Kimberleys, continuing the rates of testing, deciding who stays in the Royal Darwin Hospital, former health workers being re-engaged.

South of the Berrimah Line the mushroom treatment is good enough, apparently.


UPDATE April 5, 11.30am
Definition of “community transmission”:
From India Today – At the community transmission stage (the “Stage 3” you keep hearing about), a disease spreads in the population in such a way that people don’t know how they were exposed to the contagion: they haven’t travelled to a part of the world that’s currently battling an outbreak, or haven’t been in contact with someone they know has the coronavirus.

From BBC – Community transmission means a patient had no known contact with another confirmed case nor travelled from a country badly affected by the pandemic.