Home Issue 21 Could this be the end of the CLP Opposition?
Issue 21Volume 25

Could this be the end of the CLP Opposition?

CLP candidate and Alice Springs Mayor Damian Ryan could be one of the biggest losers out of the Johnston by-election result.

Mr Ryan, who formally declared his hand as a CLP candidate in September 2019, may now find his task in Araluen harder than initially anticipated as the fallout from the Top End by-election is analysed.

The CLP disaster also helps to mask the big swing against Labor in a traditionally safe seat, which was in part due to infighting and dissatisfaction with Chief Minister Michael Gunner’s leadership, eventually forcing the retirement of Ken Vowles and so creating the need for the by-election.

Former Richmond footballer Joel Bowden claimed victory for Labor with 30% of the vote, stating in his victory speech: “Tonight we won every booth. We had people at our throats, we had people yapping at our feet … and we were able to press on, get the ball and we got it through the goals.”

Mr Gunner said: “Territorians chose us … and you’ve got to do it all again in six months’ time!”

While TA has fallen short of winning the seat, the strong show of support will boost Terry Mills’s case to grasp formal opposition from the CLP in Parliament as former Labor-turned-independent MP Jeff Collins considers joining TA. 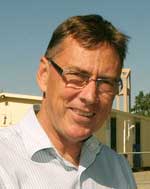 Mr Collins has been actively campaigning alongside Mr Mills (pictured) and Mr Klose in Johnston this week.

This poses the bizarre question, who can “win” opposition in a TA versus CLP contest?

Winning the right to be in second place as an alternative government is an odd concept.

If TA can form the official opposition it would give the party a new level of legitimacy as a political operation and provide a platform for “Terry Mills, as Leader of the Opposition” – a position he first held back in 2008 for the CLP.

If Mr Mills were to become the new Opposition Leader, he would receive a 65% salary increase, and his deputy would receive 30% more, and the TA whip would bank a 15% increase.

A TA Opposition would also receive extra staff and resources, which would be helpful ahead of the Territory-wide election in August.

ABC election analyst Antony Green stated on Twitter: “It is a terrible result for the CLP. August’s Territory election could be wild.

“Labor received 47.3% of preferences. The CLP listing Labor as its second preference helped. The CLP how-to-vote also makes it hard for the Greens to pass the Territory Alliance.”

ED – Robyn Lambley (pictured), the sitting Member of Araluen, who has been in discussions with Territory Alliance – confirmed this morning that she will contest the Alice Springs seat, again as an Independent.

Comment writer “David” gets it wrong – see exchange below. The Josh Thomas (CLP) how to vote card clearly has the number “2” alongside Labor’s Joel Bowden name.

Given that he has now had a shot at our commentator, Mark J Smith, and the ABC’s Anthony Green, generally accepted as one of the nation’s foremost election experts, we are requiring “David” to publish his full name with any further comment on this issue.

“David” retracts his comments and apologises.