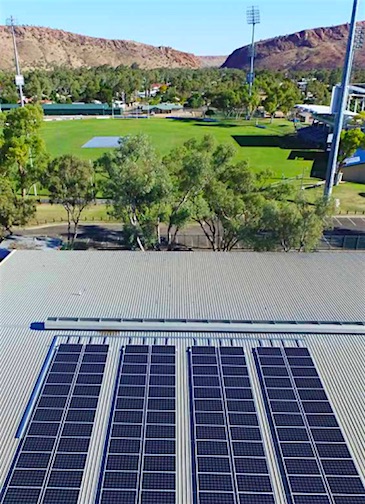 Plans for a solar system “virtual power plant” in Alice Springs, building on the Town Council’s significant investment in photovoltaic generation and catering to its energy needs, look to be a lot further advanced that council is letting on.

A Darwin-based company called RPS1101 Pty Ltd, part of the Rimfire Group, has applied for a licence to generate and sell electricity in the Alice Springs network, primarily to the Alice Springs Town Council, with any surplus sold to other licensed retailers or generators.

To do this , the company is seeking to “construct, own and operate a 2 MW aggregated solar photovoltaic virtual power plant (VPP), with an associated 684 kWh of aggregated battery energy storage systems”.

This would be in addition to the existing roof top mounted solar PV installations across 16  council-owned buildings – the Aquatic Leisure Centre, the Regional Waste Management Facility, two council depots and 11 sporting facilities.

All this is publicly available information on the Net, if you know where to look. The Alice Springs News thanks the reader who helpfully pointed this out.

Furthermore the application is now the subject of a consultation by the NT’s regulator, the Utilities Commission, who is seeking submissions from system participants and stakeholders, closing date March 24, 2020.

When the News asked the Town Council questions about the proposed VPP* – briefly referred to in its Climate Action Plan – we were told Council could provide no further detail at this early stage.

Yet, according to the company’s application, available here in full except its appendices, relevant commercial agreements have already been entered into with the council. (Of course, they would be contingent on various other things – the licence, ‘financial closure’ etc.)

The company’s application also says its “project development and capital investment processes” are sufficiently advanced to allow it to “move quickly to financial close and achieve commencement of operations in mid-2020”.

Further, the company says it has undertaken, “in consultation with” Power Water Corporation and  Alice Springs Town Council,  “a comprehensive investigation of the opportunities presented in the NT electricity supply industry”.

“Based on these investigations, detailed critical analysis has been performed resulting in the development of a detailed business plan and associated financial model that supports the case for RPS to enter the NT electricity supply industry.”

The News has asked for an explanation of council’s refusal of information about this seemingly good news story for the town. We will update this article when we have it to hand.

The application says “the high proportion of rooftop solar generation in the Alice Springs electricity network makes it an ideal location for a commercial sized virtual power plant”.

This will  “help stabilise the grid through the orchestrated management of a solar PV and battery aggregated distributed energy resource and deliver reduced electricity cost to customers”.

Its owner and managing director is  Michael Allen, who has more than 20 years of experience, “including as the former Executive General Manager Finance & CFO for ERM Power during its period of rapid growth when it was the fastest growing electricity retailer and the number one developer of new generation capacity in Australia”.

*A VPP is defined by Wikipedia as “A virtual power plant is a cloud-based [‘cloud’ being a network of remote servers hosted on the Internet] distributed power plant that aggregates the capacities of heterogeneous distributed energy resources for the purposes of enhancing power generation, as well as trading or selling power on the electricity market.”
An example, said to the world’s largest, is being developed in South Australia by Tesla and the SA Government.