Anger with out-of-control kids: council needs to step up

Above: CCTV proliferates in Todd Mall, with a mobile unit now placed virtually next to  one permanently installed. And the years go by and the problems remain.

In two and a half years the Town Council has done little more than write letters in a response to young people on the streets who are seen to be out-of-control.

Several councillors during last night’s meeting named November, 2017 as the date when council dropped the ball.

Senior Arrernte custodians – Apmereke-artweye – had approached council offering to get involved after “some very serious acts of violence and rock throwing”.

“The community is under siege,”  Apmereke-artweye Philip Alice said back then. “Traditional owners have had enough. We must become part of the solution.”

It was whittled down to inviting them for discussions.

And nothing happened. Those relationships have not been developed.

Little wonder then that there are “real perceptions” in the community that “leadership is lacking in council”, said Cr Marli Banks.

“We haven’t enacted anything to make something meaningful out of that [2017 resolution].”

Once again, the town is talking of little else. But it’s different this time, said Cr Eli Melky. Everyone has their own story to tell of a bad experience of being broken into or worse, and some people’s stories are “horrendous”.

His sample: all the people stopping to sign MLA Robyn Lambley’s petition to bring in a youth curfew. Cr Melky has stood “shoulder to shoulder” with her in two- to three-hour stints in the shopping centres, collecting signatures.

Cr Glen Auricht (pictured) said the problem is not limited to town. He travels widely with his work and in every community he goes to, council offices, health clinics, houses, shops, sport facilities are broken into  and smashed by out-of-control kids.

Aboriginal people working on communities have their houses destroyed, their cars stolen, he said.

And in town “we are copping the same behaviour”.

He spoke of “gangs of children doing this damage”, “being supported by other criminal elements”, “operating outside of anything we are able to deliver”.

He spoke of “Utopia gangs, Ali Curing gangs, Pitjantjatjara Lands gangs, outdoing each other with damage”.

He said adults waiting in the street are sending children to break in, acknowledging that this is “anecdotal”. (Cr Melky made a similar claim.)

He decried the limitations on police to “even grab hold of a youth, to stop them throwing rocks at cars”.

“Kids have got all the rights, and absolutely no responsibility,” he said, although this applies only to a “small percentage” of the population.

He said “frustration, anger, and helplessness” are building in the community “from the police down”.

He wanted to see council working with police and the NT Government, to hold children “accountable”.

The way they are being dealt with at the moment is  “almost like rewarding [them] for the amount of damage they do”.

He is “fearful that these children are going to be injured by angry people”, that “these kids would be killed” – “not what we want, but something has to give”.

Cr Melky’s comments were restrained in comparison. His latest proposal for a curfew that would deal with young people out on the streets at night using council’s public places by-law powers, is “working its way through the council process”.

Meanwhile, he wanted council “to send a message” – “we are not prepared to accept the status quo”, which has a high risk of a knock-on effect in the economy, and of cultural breakdown.

Hang on, council has already addressed the situation in two motions – on 25 November and 9 December 2019 –   and written to the Chief Minister to ask what measures his government had in place “to ensure the short and long term safety and healthy future of our community”.

The motion of 9 December also called on the government “to establish a 24 hour drop-in centre”.

Have we got a response, asked Cr Jamie de Brenni. It’s “their responsibility”, with council support, and council rangers are “working like crazy”.

The Chief Minister wanted “some other questions” answered first, said CEO Robert Jennings. He was applying the utmost discretion, those other questions being about the vexed issue of Mayor Damien Ryan’s perceived conflict of interest in being both council’s principal and a CLP candidate for election.

Mr Jennings suggested that the government would be of the view that the Deputy Chief Minister Nicole Manison’s response, on behalf of the NT police, did address council’s questions. And in the meantime, officers were proceeding on youth matters “where we can”. This has involved numerous meetings with community groups, the NT Government and agencies; the development of projects that some Elected Members are aware of, and also understanding the legal framework for council’s options. All this will be talked about in the upcoming council forum (closed to the public) and in confidential sessions (following council’s public meetings). 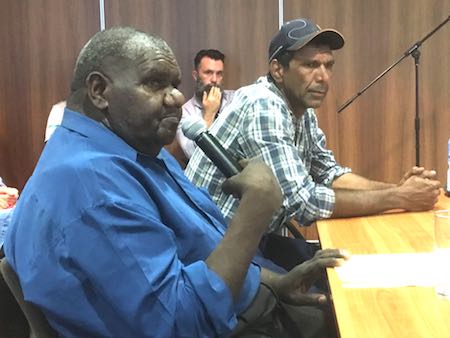 He said the Chief Minister had failed to define what the conflict of interest is.

Cr Banks, however, said that it “needs to be resolved”.

Cr de Brenni, who is a CLP vice-president, angrily rejected the suggestion of a conflict of interest for the Mayor who has “never put anything but this community first”.

He also told the chamber that there is “a tender out to get rid of Loves Creek, a purpose-built facility still sitting there”.  (He was referring to a youth camp at Loves Creek Station, 90 km from Alice Springs, which closed its doors controversially in 2017.)

“We want a reply [from the Chief Minister],” said Cr de Brenni, “where do we sit, where can we help you?”

Deputy Mayor Matt Paterson agreed that the Chief Minister’s refusal to deal with council’s correspondence is “just ridiculous”. Council needs to demand that he  “address the issues, regardless of the Mayor running”.

The community does not care about that, he said, everyone just wants to feel safe. It is “a major issue” on which the community wants “bipartisan support”.

Mayor Ryan, attending the meeting by phone (Cr Jacinta Price was an apology), suggested that the government and police should join council in a public meeting in the Andy McNeill Room.

Cr Jimmy Cocking, in the chair, said the Andy McNeill Room would never be big enough; it should be held at Anzac Oval. And in the meantime, council should work with Lhere Artepe and Tangentyere Council so that the meeting would show them all “working together” on this  “wicked problem”.

Such a meeting should also include a presentation from Neighbourhood Watch, he said.

But Cr Melky poured cold water on the idea. Isn’t it the definition of madness, to do same thing over and over? he asked.

“It would be an uncontrollable talk fest and slug fest.”

Cr Banks also saw it as “so far off what we need to do” even though she “really wants to hear from the community”. She herself, as a business owner and parent of young children, does not feel particularly threatened but she understands that “some businesses  are feeling it more than I am” and that “some people have had horrendous experiences”.

Cr Melky said the necessary “humanitarian response” to people in need has to be separated from dealing with “the criminal element”: “I’m not sure why we continue to confuse the two.”

He urged council to meet with Aboriginal custodians “immediately”:  council needs to understand “what they understand and can do”.

Cr Banks agreed: now is the time, “with new leadership in operations”, to look at making the partnership with “Aboriginal law holders”, as aspired to in the 2017 resolution.

Cr de Brenni was also on board: action “the old item”, plus demand answers from the Chief Minister.

Cr Satour, who had been quiet throughout this debate, now spoke.

She was really disappointed to see Elected Members “playing into the politics” of this issue; it goes far beyond politics, it is about getting our community back together – “all the old Alice Springs families, black and white”.

November 2017 was “an opportunity missed”. Now council has a lot to do to build relationships with Aboriginal people.

She spoke of the “social complexities” faced by some Aboriginal people in doing things “as simple as running a household, getting kids to school” – “some people don’t have a house”.

She said the town’s social programs, which are “really comprehensive”, as well as police, are running “at capacity”.

The “missing piece” is local Aboriginal people being in the conversation: “How can we work together, in respectful meaningful relationships to come to solutions?”

She gets annoyed hearing about government this, government that: “What about our people in the community, all people?”

“For me, as a local Aboriginal person, and more importantly as a  community member, I want to work towards solutions.”

First and foremost, that means engaging with Aboriginal people “who want to be part of the solution”, she said.

Mr Jennings said Elected Members would be updated in the forum about meetings that have been had to progress the resolution from 2017.