Unfinished business from 2019 will become especially tedious in 2020 because it’s an election year.

The CLP’s focus on law and order will ensure the baying for more police will reach a new crescendo without putting substance into claims.

For example, Opposition Leader Gary Higgins (pictured), said in June: “Police, Fire, and Emergency Services do an incredible job in our community, and as I’ve said before, their jobs are demand driven and the Gunner Labor Government needs to do everything they can to ensure they are properly staffed and have the necessary resources to do their jobs.”

We asked: “What enquiries, based on facts and statistics, has the Opposition conducted to support that statement? Have there been enquiries into efficiency, cost-benefit reviews, comparisons with similar situations elsewhere?”

We were told by his staff that Mr Higgins was commenting “in the context of an increase of new police stations in the Top End”.

We pointed out our request for comment had been made in the belief that the Opposition has an interest in the southern part of the NT as well, adding that the Southern Police Region has three times as many police – that’s 300% – when compared with the nation’s per-capita figure. We pointed to studies that police don’t stop crime, society does. 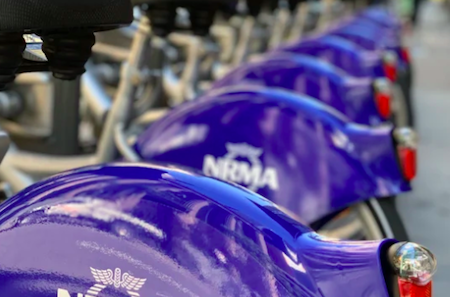 The reply this week from Mr Higgins, via a minder: “Our comments still stand as before.” That’s the comments about the Top End. No comment about the situation in The Centre.

A by-product of the national Aboriginal art gallery – should it ever become reality – is likely to be a ghastly multi-story car park in the middle of the town, relentlessly pushed for by sections of the council and the construction industry.

There is no need for it.

“The CityCycle bike hire scheme is a key part of Brisbane City Council’s plan to encourage more people to ride bikes [helping to] reduce traffic congestion and ease parking pressures in central Brisbane. The network conveniently links bus, train and ferry connections. It is a great way to get around the inner city and nearby suburbs.” The first half hour is free of charge.

And that is supplemented by several hundred electrically powered scooters run by at least two private companies: You can use them on footpaths, access them with a credit card, and when finished, just leave them where you like.

That’s the answer in the capital of our neighbour state. Alice Springs is even more suited to this kind of commuting: It is smaller, flatter and the weather is generally better.

People working in the CBD can leave their cars at home, freeing up hundreds of car parks, some of which could be turned into pleasure areas for locals and visitors.

The “Dear Chief Minister” open letter from Mayor Damien Ryan on December 20, about “recent and escalating crime on our streets” and seeking “greater and urgent action” is a classic example of being seen to be doing something while in fact not doing anything at all.

Mayor Ryan wants a “formal commitment” to a meeting with Mr Gunner “to discuss and resolve this matter on behalf of the community” following which he will “report back to the community” about “what measures are in place to ensure the short and long term safety and healthy future of our community”.

Then the Mayor wants a “commitment to increase and prioritise all relevant resources, including NT Police and Territory Families resources, to allow the short term safety of the Alice Springs community”.

That is not doing it, but providing a commitment to doing it. Timeframe: Not mentioned. All that activity without anything happening at all. Brilliant.

At the meeting with Mr Gunner, only requested at the moment, the Mayor says he will “call on NT Government to establish a 24 hour drop-in centre”.

He doesn’t explain why the council isn’t providing such a drop-in centre, which is perfectly within its powers, no doubt qualifying for NT and Federal financial support, and using the growing number of empty buildings, including the former police station. But he offers “support to achieve these outcomes within our capacity”. What is that capacity? Mayor Ryan doesn’t say.

What will he do if all he gets is the turbocharged spin that we and all other media have been dished up since 2016 by Mr Gunner? Mayor Ryan, aka the CLP candidate for Araluen, doesn’t say.

Happy New Year to you! The comment box below is all yours to let readers know what unfinished business is driving you around the bend. Stand by for more examples from us!