Questions of scale and artful answers 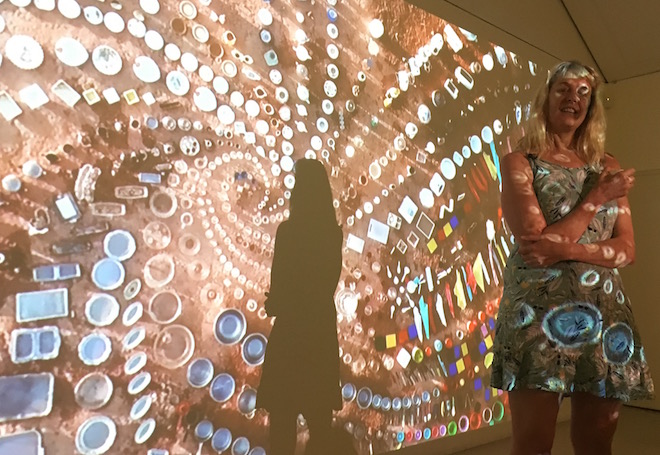 Above: Franca Barraclough during her artist’s talk last Saturday, in front of the video work that brings all elements of the show together in a mesmerising meditation upon them, a collaboration between Barraclough and film-maker David Nixon. This scene reveals an aerial view of the work , The Domestic Universe.

Towards the end of her three-year odyssey to bring The Visitors series to its current state of realisation,  artist Franca Barraclough embarked on a fund-raising drive to allow her to print and Photoshop her photographs, including two at billboard-size scale.

So I walked into this show alert to what that scale delivers beyond immediate visual impact.

In both cases, it is significant.

In The Biggest Buffel Bust Ever! the scale of the image allows the viewer to grasp the magnitude and complexity of the ecological change that we, collectively, have allowed to seize hold of the landscape. This is not just because the overall image is big but because it sets several scales in play with one another all at once.

Inseparable from the beauty and grandeur of the country’s great structures – the ranges and valleys sweeping away from town to the west – we see the thick blonde carpet of buffel grass covering the near slopes, our attention drawn to it by the clean line cut across the nearest hillside, below which it has been removed.

At the edge of that line are the Lilliputian figures of the buffel-busters.  Their labour is both herculean – as anyone who has wielded a pick on a mature buffel clump can appreciate – and paltry, even futile. Like the mythical Sisyphus eternally pushing his boulder up hill only for it to roll back down again, their task will be unending.

The image is not a call to arms for a multitude of buffel-busters to fight this beast. It is rather a critique and a truth-telling. In these anxious times of environmental change on a global scale, it is also a dismal metaphor. I say this not read the image as pessimistic about the possibilities of change, but rather as realistic about how and where to focus energy, given the scale of the challenges.

In the other big photograph, Hunters Round About, we move inside the built town. The geographic scale changes, although the photograph itself is even bigger. It captures a view that we could not hope to have by actually standing in this space, delivered to us thanks to the artful stitching together of multiple images, nine frames in all. (The buffel-busting image is also composed of multiple frames allowing the panoramic sweep of the landscape in extraordinary detail, but we could, or almost could have this long and wide view into the landscape by standing where the photographer stood).

The hyper-real positioning of point of view is particularly meaningful in this work, all the more so in the aftermath of the shooting of a young man by a police officer at Yuendumu on the weekend.

The viewer, endowed by the camera with height and extraordinary peripheral vision, is thrust forward into the centre of the image – the roundabout at the intersection of Parsons and Hartley Streets. Here a young Aboriginal warrior advances, half-crouching and alert, armed with fighting stick and number seven boomerang, his eyes on the over-bearing edifice of the Supreme Court of the Northern Territory.

The Supreme Court rises beyond The Residency, a much earlier seat for the administration of this latter-day ‘rule of law’.  At the warrior’s back, the hulking Alice Springs Law Courts, the Stuart Town Gaol (signposted from the roundabout), the old police station and the new, and a street full of police vehicles.

The figure of the warrior is small and, at one reading, in a hopeless position, surrounded. But somehow he is also troubling, persistently so, to the authority that all this superstructure attempts to assert.

In the coming days, weeks, possibly months, years (coronial processes are notoriously slow to get underway) we are going to see this dynamic played out right in the space – both physical and social-historical-political – that Barraclough’s giant photograph articulates.

Every image in her show warrants pondering. They affirm the artist as thoughtful, incisive, imaginative, inventive, humorous as we know her to be. It takes to another level her accomplishments in involving large numbers of collaborators – in particular photographer Mick Walters and film-maker David Nixon – and successfully negotiating the mise en scene of her complex ideas, all of them inherently difficult, some of them extremely so.

Note: Reproduction of the large-scale photographs here (necessarily at tiny scale) would steal some of their thunder. Go see the show at Araluen, on display till 9 February.