Most money for mining, military 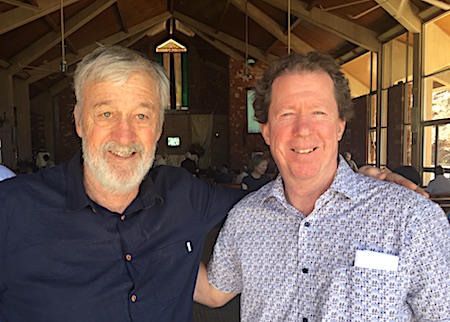 Using the Industry Capability Network (ICN) as a guide there isn’t much that’s turning a dollar in the Northern Territory that isn’t mining, the military or the taxpayer.

And no-one’s doing better than the Alice Springs founded construction company Sitzler Pty Ltd which has been awarded the $514m USFPI NT Training Areas and Ranges Project in the Top End, and has just signed up for a major NT Health staff residential complex in The Alice.

Also in The Centre Sitzlers are continuing to build the Kilgariff suburb. They recently sealed the Mereenie Inner Loop, a vital tourism project. Half a century ago they built the Catholic Church in Alice Springs.

PHOTO: Michael Sitzler (at right) with former NT politician Peter Tyone in the Alice Springs Catholic church. Mr Toyne, now a full-time artist, assisted Kathleen Kemarre Wallace with the creation of the window above the altar.

ICN chief Kevin Peters gives Chief Minister Michael Gunner a big wrap, saying in the last newsletter that he “has had some excellent media opportunities lately with announcements relating to the downstream oil and gas industry”.

For those with short memories, that’s the industry related to fracking which Mr Gunner’s party, hand on their heart and wish to die, would not have a bar of before the 2016 election. Their flip is one of the countless black marks Labor will have on their record for next year’s poll.

Says Mr Peters – mostly about the Top End: “The feasibility study conducted by WA chemical company Coogee into establishing Australia’s only methanol plant was followed up by Memorandum of Understanding between proponents for a $100m investment in the Territory-based Kittyhawk micro LNG Project.

“In terms of the Government’s objective to encourage the manufacturing potential of downstream products in support of the growing oil and gas industry in our region it’s all positive news, albeit with some way to travel before any of these projects materialise,” says Mr Peters.

ICN, according to its website, “is an independent organisation, financially supported by Australian, state and territory governments”. In The Alice the ICN operates from the NT Government’s Central Australia Development Office in The Mall.

The NT Training Areas and Ranges Project, according to ICN, “seeks to upgrade and expand” the existing training areas at Robertson Barracks Close, Kangaroo Flats, Mt Bundey and Bradshaw Field “to support the United States Forces Posture Initiative (USFPI) within the Territory”.

Delivery phase works are scheduled to start in late 2021 and be completed in 2025: “However, construction commencement is contingent on Departmental, Government and Parliamentary approvals,” says ICN.

• ERA has reinforced its plan for the closure and rehabilitation of the Ranger uranium mine near Jabiru. ERA is required to cease mining by January 2021.

• Construction of stage one of the Keep River Road upgrade has begun. Adelaide based Exact Contracting was awarded the $58m contract covering stage one and two. Over the entire project the Feds are putting in $70m and the NT Government $17.5m. Exact has also won a $10m contract to seal 15 kilometres of the Plenty River road.

• The Arnhem Space Centre: No details yet of the spend in the NT but it’s going to be part of “the global space economy which is expected to grow to US$1 trillion by 2030”.

• Falcon Oil and Gas have spudded the Kyalla 117 well as part of its Beetaloo exploration program. Empire Energy has obtained approvals and commenced their Beetaloo Basin seismic program. Empire anticipates drilling approval in the second quarter of 2020.

• Newmont Goldcorp announced the second expansion project for its Tanami mine. The planned expansion extends the mine life beyond 2040.

• Molyhil: Thor Mining has announced the commencement of the second drilling program at the Bonya deposits adjacent to its Molyhil project.

• Central Petroleum has released its 2020 exploration programme in the NT Amadeus Basin. Key attributes include a focus on 100% owned targets, no hydraulic fracking and leverage of existing infrastructure.

Really. How enterprising. To put this into perspective with what the rest of the world is doing about renewable energy, read Trevor Shiell’s comment.