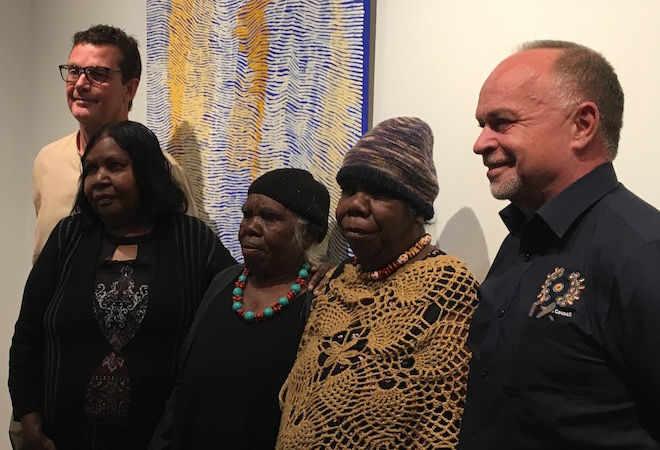 Above: Winner of the Vincent Lingiari Art Award 2019, Eunice Napanangka Jack (in the black beret) pictured with Philip Watkins, CEO of Desart, Una Napanangka, Kelly Nungarrayi Dixon, a fellow artist from Ikuntji, and Joe Martin-Jard, CEO of the Central Land Council. The group is standing in front of Napanangka’s winning entry.

“You can’t grow up without facing the hard things. As a person, you have to keep opening the doors of deeper knowledge. If Australia doesn’t open the next door it will be stuck. The Uluru Statement – voice, treaty, truth – is the next door … Our art is the key to that door.”

The Vincent Lingiari Art Award, being held this year for only the second time since its inauguration in 2016, is infused with the spirit of the Uluru Statement from the Heart, in particular the truth-telling about Australia’s history that the statement calls for.

Deputy Chair of the Central Land Council Barbara Shaw, speaking at the opening on Wednesday, quoted the words above from Mr Wilson’s  statement in the exhibition catalogue. In it he tells one of the hard truths of what happened  to his family after white contact: “In 1932 police constable McKinnon shot and killed my grandfather’s brother, Yukun. My grandfather fled in fear of his life and didn’t return for more than 20 years.”

Mr Wilson has been involved in tourism for more than two decades and he shares this story with visitors to Patji, his homeland just outside the Uluru-Kata Tjuta National Park. He says they appreciate hearing about it from him: “If they know what they or their ancestors have done in the past around here and how some people are still trying to make us the same as them, I think most become sad. They can imagine how it would feel if we did this to them.” 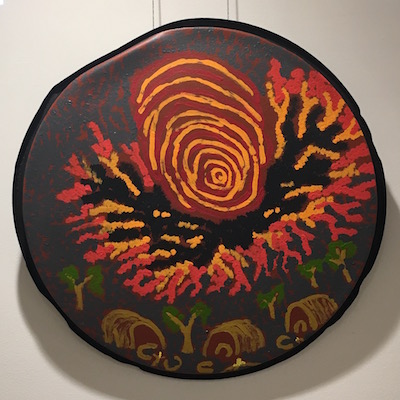 The desire to give voice to this kind of truth-telling was key to the decision to hold the award again this year, as CEO of the land council, Joe Martin-Jard, explained. At the 90th anniversary of the Coniston Massacre, remembered in August 2018 by the families of survivors and perpetrators, then chair of the council Francis Kelly noted how we remember those who lost their lives in war every year, in every town around Australia, with a special public holiday and lots of war memorials everywhere. But what about the fallen loved ones of Aboriginal people, he asked.

“‘Lest we forget’ has a much wider meaning for our mob,” said Mr Martin-Jard.

None of the paintings explicitly address the killing times, except for their sinister manifestation during the British nuclear tests of the 1950s and ‘60s, the subject of  Emu Field by Noreen Parker of the Minyma Kutjara Arts Project (at right). It shows the explosion of one of the test bombs in country where her family was living: “People thought it must be wonambi (rainbow serpent) coming from the north. They were very frighted and hid in their wiltjas. Many were hurt and died. This is a true story from my family.”

Instead, most of the artists paint – and sculpt – their country, asserting their belonging with characteristic determination and seeming optimism in their emphasis on its beauty and bounty, its compelling presence in their lives.

Broken Law by Malya Teamay of Maruku Arts might at a glance be taken for one of them, but its title prods you to look closely: there is a broken line through the middle of the painting, representing the disruption of traditional life – by the rapes, the alcohol, the petrol sniffing since colonisation, as the catalogue entry spells out. But it doesn’t stay broken: open discussion and mutual respect can join it again, reconciling Anangu and non-Anangu, saving the land, is the message of the work. 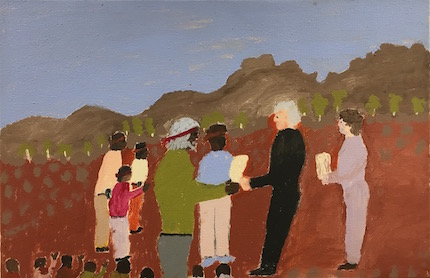 Land rights have delivered some of this movement forward and it is this subject which earned artist David Frank of Iwantja Art the CLC Delegates Choice award. His modest work, Itjinpiri 1981 (at left), shows then South Australian Premier David Tonkin handing freehold title over 100,000 square kilometres of land back to its traditional owners under the Pitjantjatjara Land Rights Act 1981.

Top prize ($15,000) went to Eunice Napanangka Jack, from Ikuntji Artists, for Kuruyultu (below right), a painting that “very clearly and powerfully informs us where she belongs”, in the words of award judge, Glenn Iseger-Pilkington.

Kuruyultu is the place where Napanangka was born. The night before her birth, her grandfather speared and ate a wallaby there and that wallaby left a birthmark on her back: “That’s what I paint,” she says in her artist’s statement.

In a work of “movement, balance, energy” she speaks to “life, birth, the cultural inheritance that informs all that she paints, all that she is,” said Mr Iseger-Pilkington, a curator who has worked with Aboriginal and Torres Strait Islander communities around the country and  with Desart for the past few years, supporting art workers to build their art management skills. 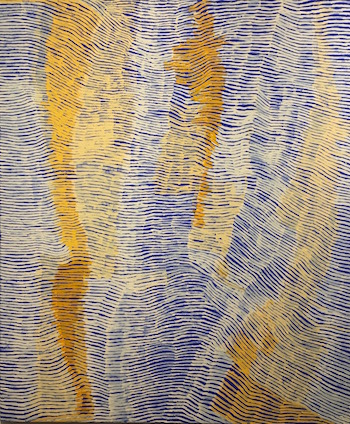 He spoke movingly about what it means to acknowledge country at occasions like this – it is the Aboriginal way, has been “since the very beginning”, of recognising the “cultural and physical sovereignty of each others’ nations, making each other visible, our country visible, paying tribute to our old people.”

He acknowledged too “our kartiya [non-Indigenous] friends and colleagues” for their support, “sharing our stories, celebrating our cultures, looking after our people.”

He spoke of Vincent Lingiari as one of the nation’s most important activists, whose work led to changes of law, changes in Australia’s very psyche. This had led him to think about his own people, whose connection to their country in the mid-west region of Western Australia was recognised in a native title determination in November last year after 20 years of waiting, though of course it was always known to them.

For him though it has never felt like a home, with his family pushed and pulled in so many ways by the forces of colonialism over the last five to six decades. His parents parents followed work, which meant that he spent most of his childhood in the Kimberly’s far north-west, a great place to grow up but not where he belonged.

This story of dispossession and the search for belonging is the story for many Indigenous Australians. Finding connection will be a lifelong journey for him, transformed by his work with Aboriginal communities. This has opened his eyes in particular to the critical importance that relationship with country has for their cultural, social and spiritual wellbeing.

This sense of belonging is the essence of what is celebrated in the 23 works by 25 artists in this award exhibition – “the story of our country, on offer to all Australians.”

The award exhibition, Our Country – True Story, is on show at Tangentyere Artists Gallery in Fogarty Street until 17 October. The work of a partnership between the Central Land Council, Desart and Tangentyere Artists, this is the first and only art award in the region, and probably the country, developed by Aboriginal organisations, as noted by Philip Watkins, CEO of Desart.

The show is part of a veritable festival of Aboriginal art, constellated around the annual Desert Mob which opened at Araluen last night.

Pictured below, in descending order: My Father’s Country at Sunrise by Kathleen Nanima Rambler of Artists of Ampilatwatja. • Glenn Iseger-Pilkington and Rosie Smiler congratulate Napanangka on her win. •  MHR Warren Snowdon with members of the Lingiari family, from left, Rosie, Lisa and Mary Smiler and Antoinette Bernard. They travelled to support the award from Kalkaringi in the north-west NT, a “bloody long way”, as Mr Snowdon said. • The crowd on opening night, with artist Mervyn Rubjuntja prominent in the red beanie. 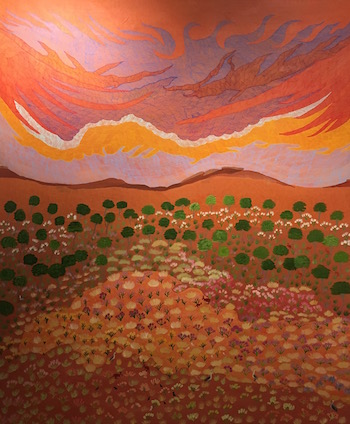 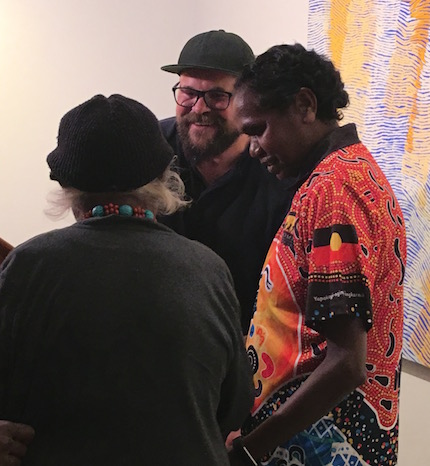 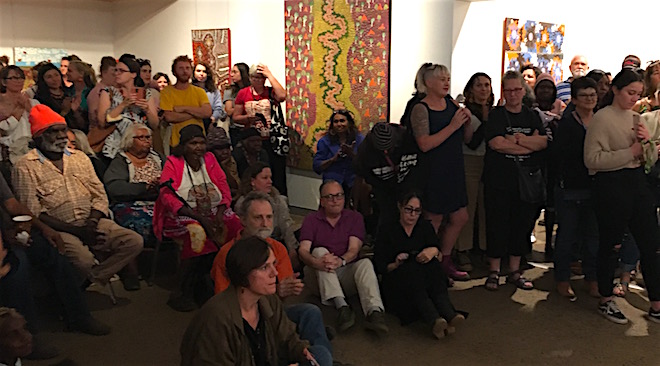