'The fastest accelerating vehicles on planet'

The Alice Springs Inland Dragway is among the nation’s best, rated for 8000 horsepower Top Fuel machines, and built by enthusiasts for the town’s huge number of petrol heads. ERWIN CHLANDA spoke with long-time supporter Andrew McGouchie.

If you play tennis for an hour you are hitting balls for 60 minutes. If you’re into drag racing it’s all over in 10 seconds, or in less than six if you are really good at it.

“Top Fuel drag cars are the fastest accelerating vehicle on planet. You don’t hear them. You feel them. Your lungs rattle. It’s 3.2 on the Richter Scale as they move off down the track.”

The sport takes the capacity of a machine to the very edge of its envelope – and so it does with what a human can stand, with women drivers able to bear more than men.

Mr McGouchie, who looks after safety at the Inland Dragway (CADRA), has news for people who think it’s all bout driving 400 meters while making a lot of noise and smoke.

The devil is very much in the detail for this crown of year-round motorsports in The Alice, he says.

It requires reflexes at the start where skills are measured in thousands of a second, horsepower in what’s in front of three zeros, and bank balances in how many tyres you can afford at $1600 a pair and lasting eight quarter-mile runs.

But while Top Fuel car racing needs immensely deep pockets, you and your mates can put a blower on top of a Holden V8 and turn it into a Door Slammer (pictured). Just avoid conversations about the bank balance with your better half.

Mr McGouchie has spent the past 20 years in town building up a family business – including auto trim and upholstery – while giving his spare time to speedway, the Finke Desert Race and drags when its competitors still had to do a 1000 klicks round trip to Tennant Creek to engage in their passion.

“These drag cars have ballistic horsepower,” he told the Rotary Club of Alice Springs this week.

Their 500 cubic inch motors – measurements are still Imperial in acknowledgement of the sport’s USA origin – leave a V8 Landcruiser’s horsepower in the shade: 380 compared with 8000, and up to 11,500 for a short time.

The chassis arches “like a big shanghai” under the torque generated by the driving wheels.

“Just the parasitic horsepower on the front of the crank to run the blower is over 800 horsepower,” says Mr McGouchie (pictured).

Supercars have a reputation of being fairly grunty – 750 horsepower: “That’s a good one. But each of the eight cylinders of a Top Fuel dragster puts out 250 horsepower more than that.”

“When they take off, by the time the back wheels get to where the front wheels were when the car was stationary, the dragster is doing 70 miles an hour.

“There is a human being in that car.

“Women can drive faster than men without passing out from G-forces, a massive five to six Gs.

“It took them long to figure out why. Women’s hearts are higher up in the chest and they get a better supply to the brain whereas men a prone to pass out.”

In 2017 Kelly Betts (pictured) did a five second quarter mile in Alice Springs (photo at top) despite hitting the wall: “She scrubbed the wall but she never lifted her foot. She kept it planted the whole time. Amazing determination – and confidence that she could control the car.”

By the time the cars get half way down the quarter mile course (around 400 metres) they are doing nearly 300 miles an hour. That’s 480 km/h in 200 metres, and they gain about another 50 mph in the last section, making the speed over the finish line 560 km/h.

And then they have to stop. The dragster have a parachute and ceramic brakes – steel ones used to melt.

“You don’t put on both at the same time because the reverse acceleration G-forces would be so severe it would pull the light sensors off the back of your eyes’ retinas and you get a form a macular degeneration. It’s that severe.”

The engine revs at 10,000 rpm, that’s 166 revolutions per second. Fuel consumption at full throttle is four litres a second.

Not surprisingly, the bits don’t last: Pistons generally do one or two runs. The conrods, which connect the pistons to the crankshaft, will do about four. A lower – super charger – will do about 25 runs, a chassis about 70 runs.

CADRA has one of the nation’s best strips: “We are very gifted for a town with 22,000 people. Alice Springs punches so far above its weight.”

The facility was built under the Adam Giles Government and the way it was done was probably the cleverest way to finance public works: The money went to the club which then called on its members, many of them in the building industry, for freebies and mates’ rates.

The effort resulted in a certification for Top Fuel drag cars: “For a city of 22,000 that is just unheard of.”

Mr McGauchie likes to show off interstate: “Our run-off goes to Coober Pedy.”

Top fuel motorbikes running on nitro methane would do a 5.6 second quarter mile. “The rider turns it off halfway and is coasting for the rest of the way” or the engine would blow up.

A driver’s precision is uncompromising: A minute over-correction on the steering wheel for half a second would move the car two metres sideways and it may roll.

What if something goes wrong?

Not as big a worry as one would imagine: The car breaks in half – the engine and the roll cage containing the driver go their separate ways: “It generally separates the bonfire from the driver.”

That saves the driver from an engine that may explode, and because the cage is unlikely to strike an immovable object, the occupant usually walks away. 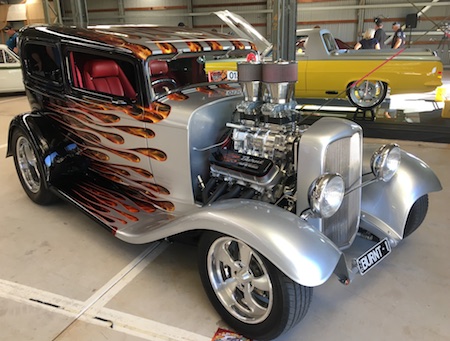 The cars have three or four computer-guided engine controls which can be changed at a moment’s notice – a cloud has come across the sky, the performance of another driver, the air temperature has changed.

Show cars must prove themselves on the drag strip to win awards.

This may well lower the power, otherwise “all people would be doing is smoking tyres. It’s now how much power you have, it how you use it.”

This, says Mr McGauchie, is good a good motto also for other walks of life.


UPDATE 9.13am: Winners at the 2019 Red CentreNATS just announced were Brent Murray who took out the title of Grand Champion with his 1968 Dodge Dart “EVL 68”, Casey Tolcher won the Burnout Championship in his 1985 VK Commodore Sedan “HI RI2K” and Warren Gersekowski won the Burnout Masters in a 1971 Holden HG Ute “1 TUF HG”.