Home Issue 13 CLP could have won with a better candidate: Hanna
Issue 13Volume 25

CLP could have won with a better candidate: Hanna 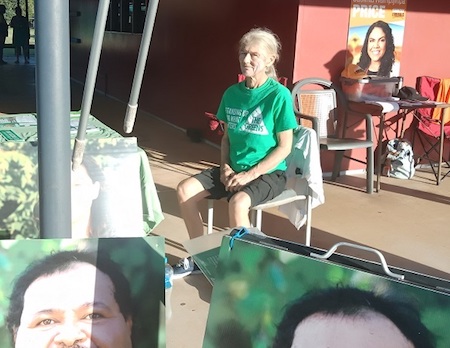 Sir – The election was a huge loss for the Greens.

We could have done a little bit better with a earlier campaign strategy, but this was not to be. I was endorsed at the same time the election was called by Scott Morrison, so I only had about seven weeks to play with.

The NT Greens had a very small budget to spread over three electorates. We had less than $50k from what I am led to believe, and much of that went into posters, flyers, how to votes and radio adverts.

Campaigning in my electorate of Lingiari took me to Batchelor, Berry Springs, Humpty Doo, and Alice Springs.

I managed to speak with a few of the locals at Santa Teresa and hand-out flyers.

The Greens were the best choice to pull out all stops on fracking and all the environmental mess that comes with it but the Australian voter seems to be too caught up in the here and now, and the “ME” factor. Now we wait to see how much damage is going to be dished out to our fragile environment.

Labor can’t act in the NT even if it wanted to on many issues, as the Liberals and Nationals are in power Australia wide. Warren may as well go on a three year tax funded holiday as every move he makes will almost certainly be quashed by the Lib-Nats down in Canberra.

The CLP could have won Lingiari had they fielded a better opponent than what was on offer. Jacinta Price is so very much disliked by a large proportion of Aboriginal people in the electorate. That is why they lost.

There is an urban legend going around Alice Springs and its the fact that Warren Snowden’s mustache alone is worth 5,000 votes.

The campaign leading up to the election was a dirty one, but historically this is how the Liberals play. They like to attack their opponents early on.

The Greens have a softly softly approach. There was a point five weeks into campaigning where I was attacked over a five month old meme, that was dragged up by my CLP Lingiari opponent.

It took me by surprise. Why? Because who cares in the modern world about a five month old meme shared on Facebook? I was not even a candidate at the time.

Well, obviously the Murdoch run newspapers care a great deal. What was more mysterious was the fact that my opposition candidate accuser was found guilty of the same said charge, accusing Muslims about their private racial accords.

Unfortunately for me the Murdoch run newspapers were not interested in her racial profile story. I was the one they wanted to drag across the muddy playing field that was the 2019 elections.

On the night after the NT News chose to accuse me of racism on the front page of their rag. I was set upon by Liberal whack jobs via my Lingiari Greens Facebook page.

Talk about weirdos, they are out there alright and I copped it sweet over that coconut meme right up until polling day.

For seven long weeks of campaigning I really did care, and tried to make a difference. People are all individuals and have a mind of their own, maybe next time the Greens will shake that tree a little harder.

Congratulations to Warren for winning.

PHOTO: Campaign worker for the Greens at Berry Soprings.