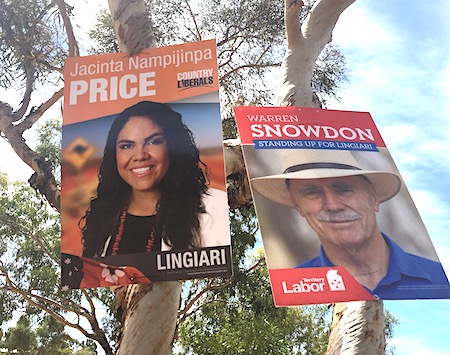 The media releases for Country Liberals (CLP) politicians and candidates, including Lingiari candidate Jacinta Price, are now issued under a Nationals banner (pictured below), stating at the bottom of the page: “Authorised by Ben Hindmarsh, National Party of Australia, 7 National Circuit, Barton ACT 2600.”

Local historian and long-time political observer Alex Nelson says he is surprised about this.

“The CLP always emphasised that it has its own identity, a Territory Party, and was not beholden to any organisation outside the Territory,” he says.

“It merely has affiliation status with the Nationals, and it used this as an argument against Labor. The CLP alleged that the Labor Party is controlled by its masters interstate.

“I have never before seen CLP material authorised by anyone outside the NT.”

The News is seeking comment from CLP vice-president Jamie de Brenni and from the Nationals.

Meanwhile voter numbers in Alice Springs have increased sharply since the 2016 Territory election.

These are Territory Legislative Assembly seats but it is the Territory Electoral Commission which takes charge of enrolments applying to Federal Elections as well, including the one on May 18.

By contrast in Namatjira, which also takes in the town’s farm area, enrolments are down 7.76% and 5.42% in Stuart. These two NT seats make up much of Lingiari.

On the face of it that’s all bad for sitting Member for Lingiari Warren Snowdon who performs much better in the sticks: In the 2016 Federal Election he scored 9655 votes in Lingiari’s “mobile polling booths” compared to 4125 for the CLP’s Tina MacFarlane, well under half.

In Alice Springs the gap was much closer – 4998 votes went to Mr Snowdon and 4234 to Ms MacFarlane.

It was a comfortable margin but it could be swallowed up by the newly registered voters.

After the redistribution in February, Lingiari would need an 8.19% swing, and is still considered a fairly safe.

It’s anyone’s guess what the result will be if a greater percentage of people vote this time.

Dissatisfaction with the major parties seems to be at an all-time high, with the inept Labor Government in the NT – the record deficit and the national Aboriginal art gallery fiasco being just two examples – no doubt a stone around Mr Snowdon’s neck.

The bizarre behaviour by CLP candidate Jacinta Price in the wake of scrutiny of her performance in the Alice Springs Town Council suggests she wants to become Central Australia’s answer to Donald Trump: Never mind the facts, and if you don’t like the questions just abuse the questioner and refuse to answer.

The rampant dissatisfaction with the major parties seems likely to open the door for 1 Territory, founded in 2015, which is represented in Lingiari by Independent Hamish MacFarlane (pictured), one the party’s two vice-presidents.

The other, Sue Fraser-Adams, says although he is the brother-in-law of the CLP’s 2016 candidate Tina MacFarlane, his loyalty is firmly with 1 Territory.

His CV published by the party says he has lived in the NT since 1964.

He grew up on Moroak Station on the Roper River working with local Aboriginal people.

He moved to Mataranka in 1988 as a result of the BTEC program, then relocated to Queensland in 2012.

After six years in Bundaberg he returned to Katherine and “was horrified at the changes that had happened to the NT in that time”.

He has worked in the pastoral, mining, tourism and the fitness industries, and in disability care.

The fledgeling party is uncompromising in its opposition to fracking, an issue that has turned many people in the NT away from the CLP, and who now feel betrayed by the Labor Government’s “scientific enquiry” and its apparently pre-determined outcome.

“We want to get on with the job. We want to get the gas up out of the ground and into people’s homes and businesses as quickly as we can.”

The company said on April 23 it “is extremely encouraged by the announcement that a future Federal Labor Government will commit $1.5 billion to fund new nation building gas pipeline infrastructure in Queensland and the Northern Territory to link the large untapped gas resources … with the gas-short southern market.”

The statement says the ALP proposal including the Galilee and the Beetaloo / Greater McArthur basins, “if it is fully funded, is a game-changer for the east coast domestic gas market.”

Fracking is one of the issues the News will be rising with Mr Snowdon in the interview we have requested.  All but invisible between elections, he has provided us, upon our request, as pre-interview background, a written list of 10 reasons why people should vote for him on May 18.

Mr Snowdon, aged 69, is the Shadow Assistant Minister for Indigenous Health, Northern Australia, External Territories and the Centenary of ANZAC. He is a member of the Left faction of the Labor Party.

The ex-teacher and senior project officer with the Central Land Council for four years from 1983 was elected to represent the single Northern Territory electorate in Federal Parliament in 1987 and has been there almost continuously ever since.