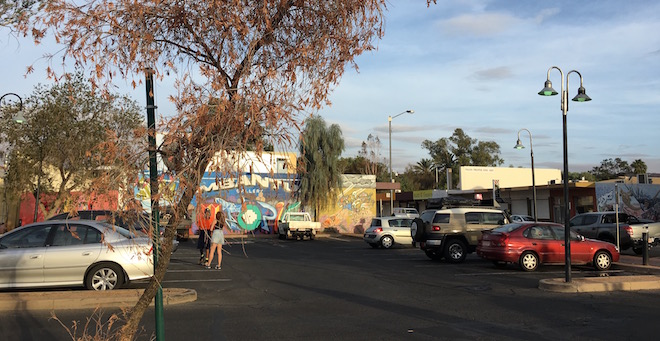 Above: The NT Government will fund a CBD car parking review. Meanwhile, council could perhaps do something about the dead tree.

Chief Minister Michael Gunner has fobbed off the Town Council’s request to meet with him after he made “disparaging remarks” and “innuendos” about council in the Legislative Assembly; he has rejected supporting with funding council’s master planning process; and, it would appear, he has a brand new location in mind for the proposed national Aboriginal art gallery – the Civic Centre block.

This last was reported by the ABC yesterday and would involve council moving to the site of the former Anzac Hill High to make way for the gallery. The proposal has apparently been the subject of an exchange of letters between Mr Gunner and Mayor Damien Ryan.

If it was being considered  by council last night, it was behind closed doors, the only hint coming from Councillor Eli Melky’s non-specific objection to a certain item being listed in confidential. Mayor Ryan told the ABC this morning that council is investigating a suspected leak.

Meanwhile, Mayor Ryan’s request that Chief Minister meet with elected members, in the wake of his comments in the Assembly, received a three-sentence reply.

Mr Gunner talked about loving Alice Springs, the town he was born in, and declared he “will always talk about Alice with pride and passion”.

He said nothing about the comments, but said the future of the town was “dependent” on the council and government “fostering a positive partnership”, which “transcends any partisan political interest”.

That letter was dated 14 March.

The day before he had sent another, rejecting funding of council’s Alice Springs Master Plan 2050.

The government has its own preferences for projects to benefit Alice Springs, he said. They are “prepared to consider funding a car parking plan and a lighting plan as part of the Alice Springs CBD revitalisation”.

In the meantime, he understood council had endorsed all of the projects presented to it in a briefing in early February.

These are now the subject of a design tender, released last Friday, for works in four areas:

•Heat mitigation, “using a combination of strategically located and connected shading and landscape initiatives to encourage and extend pedestrian activities” during the day.

•A safer CBD using Crime Prevention through Environmental Design (CPTED) including “improved lighting, identified safe zones and a more inviting, well-designed streetscape” improving “the appeal of the CBD after hours”.

•A Kwatja (Water) Play Space for children of all ages to broaden the appeal of the CBD for families.

Construction tenders will be released in the second half of 2019, according to a government media release, with all projects expected to be completed by early 2020. 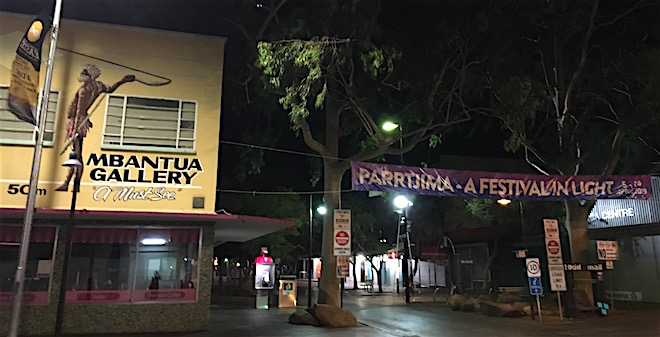 Above: A deserted Todd Mall on a  fine summer’s night (photo taken at 8pm yesterday). The government intends to make the CBD more appealing after hours.

At council’s end-of-month meeting last night, there was no discussion of Mr Gunner’s fob-off, at least in the open session, but the rejection of support for its master plan did provoke debate.

She described the government’s approach as a “$20m cash splash” coming in time before the next election, and “highly project-focussed” in contrast to an “aspirational” long-term vision of where Alice Springs could be in 2050.

Council’s budget is in surplus and it could afford to fund the plan, she argued, building on the time, money and resources invested thus far, including by engaging the former Lord Mayor of Adelaide to produce an “expensive” briefing document. (No dollar figure was mentioned.)

Mayor Damien Ryan did not see that as  “totally wasted”, given the cross-over of some of the master plan’s goals with the government’s central area plan, on which council has had input and which councillors have unanimously endorsed.

Cr Catherine Satour agreed with Cr Banks that Mr Gunner’s response and the CBD works had “nothing to do with” a master plan.

Cr Jamie de Brenni also felt it was “disappointing”, but was frustrated that “everything comes back to CBD”, when he sees issues going beyond that area.

He wants council to concentrate on doing something about car parking at the Alice Springs Hospital, which he says is getting “worse and worse”. He described seeing old people having to walk some distance in the heat to the hospital, because they couldn’t get a park.

Cr Glen Auricht accepted the similarities between the government’s plans and council’s priorities but they were still not sitting down at a table together, moving forward, “working as one”, which is what he would like to see.

Cr Melky supported Cr Banks’s bid for council to fund its own process, so that the long term future of the town would not “be mapped out by never ending knee-jerk reactions under the guise of planning”.

Mayor Ryan suggested that could be the subject of discussion in budget meetings over the coming weeks.

CEO Rex Mooney, however, pointed out the council had not yet approached the Australian Government, as it stated it would in the  resolution that had led to the production of the briefing document and the approach to the NT Government.

He blanched at the suggestion from Cr Banks that the master planning process could cost as much as $500,000 (she suggested funding it over the next two financial years). That figure was based on what Darwin’s process had cost, which was “not comparable” to what would be required for Alice Springs, said Mr Mooney.

Cr de Brenni said such a figure would require a one percent rate hike: was that really what councillors wanted? That money would go to consultants, not locals; the town is “economically in trouble”, there’s “no work going on, everything is a plan”.

He mentioned there being “23 plans” in the  government’s pipeline.

So he was happy to see the master plan put on the back burner, and for council to focus on its “core business” – “roads, rates and rubbish” (and the hospital car park).

She cited Katherine’s master plan, a “very inspirational document”, which has “transformed their town” (although she did not mention that this plan was developed by the town’s CEO, who took the initiative himself, helped no doubt by his string of qualifications, including in architecture, economics, management and leadership.)

She said council could look at funding its master plan but should also try the Australian Government.

Deputy Mayor Matt Paterson agreed, and in the end everyone came on board, including Cr Banks, though stressing once again the need for an aspirational document: “I don’t want us to go down as a  vision-less council.”

The meeting drew to a close on a strained note when Cr Melky had said he wanted to make a brief statement about a matter listed in confidential, item 25.1.1, a report from the CEO, “No 50/19 cncl”.

Mr Mooney started with a caution – reminding everyone of their obligations under the Local Government Act, in particular sections 75 and 76, which deal with confidential information and its “improper disclosure” or use – before ramping up  to “just put on the table” the penalties for breach – “up to two years on gaol”.

Cr Melky had no intention of risking a spell in gaol. He referred to his record on challenging items being in confidential that did not need to be, in particular financial matters.

On the mysterious report “50/19”,  which presumably is about Mr Gunner’s latest idea on a location for the proposed national Aboriginal art gallery, he said he “would much prefer to have this report in the open”.

“I see no reason for it to be in the confidential, it does not in any way, shape or form, in my opinion, breach any of the regulations, other than one perhaps.”

That was enough for him to leave it there, where it remains, at least for the time being.