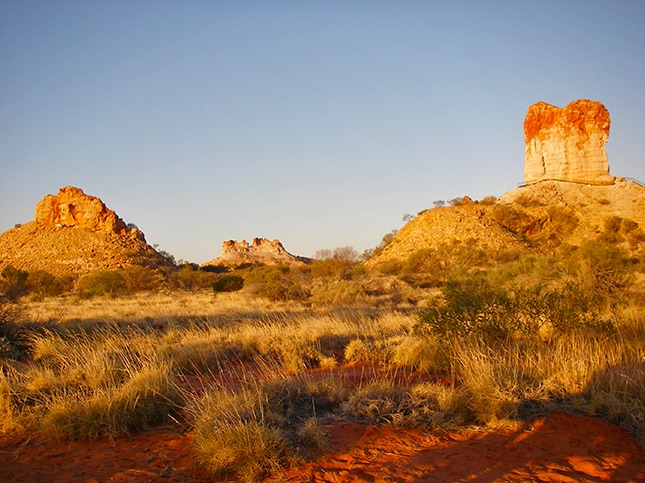 Above: Chambers Pillar, as it is known in English, is a Site of Aboriginal Significance, as a Parks and Wildlife Commission fact sheet explains, starting the story like this: “In the Dreamtime it is said the Gecko ancestor Itirkawara (pronounced it-turk-kar-wara) left the Finke River and journeyed north-eastward.” Photo from their website.

Usage and meaning of the words ‘Dreaming’ and ‘Dreamtime’ have moved a long way from original understandings, reflects DICK KIMBER.


The first record of some understanding of the Aboriginal belief known as “Dreamtime” was in 1878 by a recorder, R.B. Brough-Smyth, who wrote in his study, “The Aborigines of Victoria”: ‘There are the dreamers, who direct and control the movements of the tribe until their divinations are fulfilled or forgotten.” (Volume 2, p 126).

However the first knowledge of the term in central Australia was recorded by Baldwin Spencer in 1896. “They say that in what they call the Alcheringa (or as Mr. Gillen appropriately renders it the ‘dream times’) a certain noted warrior journeyed to the east.” (Horn Scientific Expedition to Central Australia, Volume 1, p 50).

In central Australia, west into the desert country of Western Australia, and south as far as the west of Port Augusta, the Arrernte word alcheringa or altjeringa, which is termed tjukurrpa south and west of Arrernte country, and which is often expressed as “dream-time” or “dream-times”, has a special meaning. It refers to the past, present and future of the history of all aspects of the sun, moon, stars and skies, as well as all features in the landscapes and peoples: importantly it is perceived as eternal. However, I will now give some illustrations of uses of its English renderings that are modern, but usually not equivalent, in meaning.

Many people will recall the film, The Castle, in which the main character tells his sons to state to a prospective seller of second-hand goods, “Tell him he’s dreaming”. More recently “California Dreaming” was clearly an article about wine production in South Australia, and attempts by the Penfold Company in “future-proofing” the wines. (The Age, Business, July 4, 2018, p 21).

Then a recent letter to the editor in the NT News was very clear in its political meaning: “A new dam is Territory dreaming, believe it when you see it”. (Letters, p 38, September 1, 2018).

Coming closer to the actual meaning are the following:-

“Brisbane Dreaming” is a friendly article about descendants of the Brisbane Aboriginal people, who have been doing their best to revive and revitalise their knowledge, wishing “everyone to know about our culture” (The Weekend Australian, Travel + Indulgence, August 11-12, 2018, p 16).

Another article, “Central Dreaming” (The Koori Mail, September 19, 2018, pp 26-27) is sub-titled, “Between a rock and a heart place”. It quotes Sammy Wilson, a “respected community leader of Mutitjulu”, as stating to visitors to Uluru (Ayers Rock), “Please respect and learn about this place”. Sammy’s emphasis is on his grandfather, Paddy Uluru, when he says, “Uluru is in our history from way back to Uluru family.” The article is unusual in not mentioning the word “dreaming” at all, except in the heading.

However, another more recent article in  the Arts section of  The Age (November 12, 2018, p 29), which is titled “Electric dreaming”, also has no mention of the word. The article is about a theatre performance, “Astroman”. While the two well-known key actors are of Aboriginal descent, and the reviewer is enthusiastic about the use of music and other modern forms of entertainment, it seems to me to be a case of anything at all associated with Aborigines being referred to as “dreaming.”

The greatest contrast is in Christopher Allen’s review of the book John Mawurndjul: I am the old and the new. The article is titled “Shimmering of long-ago shades” (Weekend Australian, Visual Arts, 12 August 11-12, 2018). The review author states, “at the very core of the Aboriginal idea of what used to be called the Dreamtime is that the ancestoral spirits and creation figures are still present in the world around us, hidden in the land or dwelling within the people living today.”  He gives no reason for saying it “used to be called Dreamtime”, before  continuing: “These beliefs are spiritual and poetic, not philosophical or subject to logical rigor, so it is not surprising to see that there are slight slippages between different explanations of the same meaning or the same phenomenon.”

Allen then gives an eloquent, academic discussion of his understanding of the artist’s uses of colour, assessing the work as “virtuoso” and the artist as “unequalled“, with which I agree, but it is impossible for me to agree with his more general statement about “what used  to be called the Dreamtime” (my emphasis). 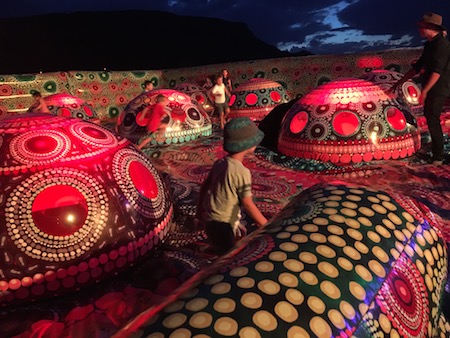 In written coverage of  the 2018 Parrtjima festival at the Desert Park in Alice Springs the word “dreamings” was used on almost 15 occasions, and the sense of these “dreamings” being eternal, ever present, in the countries of the artist was given in both written and spoken words.

Left: 2018 Parrtjima’s unique jumping castle. The credits for the artwork gave the artist’s name, language, skin, dreaming, and country. For example, Evelyn Young’s “dreaming” was given as “snake and rain”. Photo from our archive.

An article in the Weekend Australian Magazine (pp 46-47) by Rick Morton managed to avoid use of either “dream-times” or “dreamings” but under the heading “Star bright – An Ancient Culture Is Illuminated” it included a comment by Arrernte man, Benedict Stevens: “The Arrernte people are brought together in one circle by the caterpillars of the MacDonnell Ranges. Lighting up the country shows visitors that the country is still alive”.

An article about the annual Desert Mob exhibition, “Artists flock to Araluen” (Centralian Advocate, Lifestyle, September 11, 2018, p 12), quotes an artist with a common usage of “dreaming”:

Tjarlirli Arts’ Tjukupati James came from Docker River to display a large painting of a strong women’s story in the exhibition. Despite only starting to paint in 2012 and having her first exhibition last year, Ms James’ painting was quickly snapped up by Araluen, before the exhibition was made open to the public.

She said she painted every day, and was proud to show her work before lots of people. “That’s my dreaming, I know that painting – only I can paint that” she said.

R.M. Williams’ Outback – The Heart of Australia, also titled 20 Years of Outback Collectors’ Edition,  has a brief article “Dinosaur dreaming” (p 69); and another titled “Desert dreaming” (p 77). The first does not explain why the word “dreaming” is used, and neither does the second. However the second explains that the Pitantjatjara woman, Nganyinyta, wants children to learn “about the land and the way of life.”

Bryan Clark’s article, “Sight of ‘smoke bird’ evokes fond memory of good friend” (Centralian Advocate), has a comment “I stopped, looking around me at the listening scrub. An ancient silence lay over the dreaming landscape”. He then explains what he means by the expression:

The trees were absolutely motionless. Not a breath of a breeze.

Then, off to one side of my gaze, a movement attracted my attention.

Looking up into the upper branches of an old Ironwood tree my eyes fixed on a single bird with smoky-coloured feathers that was flitting from one limb to another.

Looking down at me. Looking away. Looking back again.

Almost as if it were deliberately trying to have me notice it.

In a moment, without a sound, the Smoke Bird took flight and swiftly winged its way off to be lost in the hidden valleys of the ranges.

In contrast, “Downsize dreaming boosted”,  in the NT News (Lifestyle, November 13, 2018, p 10) is nothing at all to do with dreaming, but is purely an article about housing.

Yet another article “Students find the Dreamtime in tech” (The Koori Mail, November 14, 2018, p 7) indicates that young Aborigines and Torres Strait Islanders are successfully using modern means to enhance “Dreamtime stories about animals and humans into an educational tool.”

As final recent illustrations I use four examples from  The Koori Mail of November 28, 2018, all of which include nice portraits of the people mentioned. The first is “Archie sings the Dreamtime Awards” (p 5).  A brief note axccompanies it, stating that, “Uncle Archie Roach” was given the “The Dreamtime Awards Lifetime Achievement Award” at a ceremony in Sydney. He is quoted on page 32 as stating: “I just want to let people understand, non-Aboriginal and non-Torres Strait Islanders, the great love that we have for each other and how that love has kept us strong”.

Complementing this article is another page  of “Dreamtime Award winners” which include “Education Awards”, “Community Awards”, “Sports Awards”, “Arts & Entertainment Awards” and “Major Awards” (p 33). The only reference to “Dreamtime” is in the last named reference, under which there are “Dreamtime Elder of the Year: Aunty Thelma Weston”, and “Dreamtime Person of the Year: Uncle Bruce Pascoe”.

The same newspaper has an article on page 68, “AFL dreaming becomes reality”, which tells of seven young Aboriginal footballers who had “found their way onto the list through the main draft.”

On page 63, under the title, “Magic’s Moments” , is a story about a young player, Jason Carter, who “is hoping to put Wyndham on the map with his footy”. It concludes with “Until Next Time…..Keep Dreaming”.


Note: Richard G. (Dick) Kimber is regarded as the premier scholar of central Australia for his contributions in the fields of ethnography, history, the deep past, linguistics, rock art, and contemporary Aboriginal art.