Mineral exploration on the way up

By ERWIN CHLANDA
NT mineral exploration annual expenditure is recovering from a trough of $78m in 2016 reaching $123m in 2018, but is still way below the 2011 peak of $228m.
Ian Scrimgeour (pictured), Executive Director of the Northern Territory Geological Survey, told the Annual Geoscience Exploration Seminar (AGES) conference in Alice Springs this morning that significant discoveries – many in Central Australia – are likely to lift that figure substantially.
Greenfields exploration in the NT has doubled since 2014 and brownfields exploration has rebounded since mid-2017.
The biggest increase has been in McArthur  (32%) followed by Aileron, some 100 km north of Alice Springs, (24%).
They include Tungsten (Molyhil), Rare earths (Nolans); salt (Chandler); vanadium-titanium-iron (Mt Peake) and Phosphate (Ammaroo). 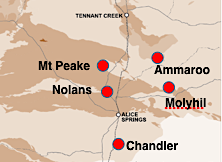 A bit further north are Todd River Resources at Mount Hardy (zinc), KGL Resources at Jervois (copper and silver) and Independence Group/Prodigy Gold at Lake Mackay.
Several companies have joined the hugely successful Newmont in the Tanami, which has just produced its 10 millionth’s ounce of gold: They are Newcrest Mining, Northern Star Resources and Prodigy Gold.
Uranium has a revival with increasing prices: Eclipse Metals are doing a gravity survey in the Ngalia Basin, some 300 km north-west of Alice Springs.
In the Amadeus Basin west of The Alice, Central Petroleum reports a 23% increase in gas production to 6.15 billion cubic feet in 2018; production restarted at Palm Valley gas field; two appraisal wells were drilled, an increase in gas reserves were announced for three producing fields, as well as a 154% increase in oil reserves.
Mr Scrimgeour says the NT Government’s $26m four year (2018 to 2022) “initiative to grow the exploration sector” will further boost the industry.

He says there is a “dedicated program to assist companies attract investment or joint venture partners from international markets, with a focus on east Asia and North America” including web-based multi-lingual promotion, domestic events to global investors and ministerial-led delegations to China, Japan and South Korea.

Meanwhile Minister for Resources and Northern Australia Matt Canavan says potential new mineral and groundwater resources in the Northern Territory and Queensland have been revealed by results of the world’s largest airborne electromagnetic survey.

He says it indicates potential for new mineral deposits including gold, copper, nickel, lead, zinc and manganese, as well as critical minerals such as cobalt, platinum-group elements and rare-earth elements.

The data have received huge interest, with 13 exploration companies already signed up to participate in infill flying during the next survey, which will be acquired across an equally large area of the west of the Northern Territory and into Western Australia.

The current AGES has the highest number of registrations since 2013. More than 50 exploration companies from around Australia and globally have sent delegates, including some looking at investing for the first time in the Northern Territory, according to Mines Minister Paul Kirby.