Ghan walk: Signs of the times 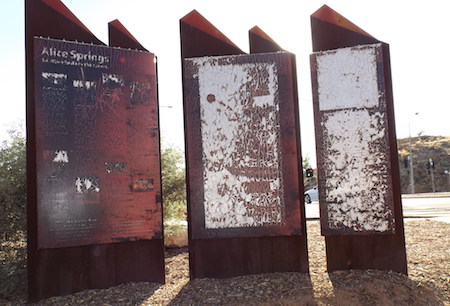 Today’s Murdoch twice-weekly laments that the signs lining the tourist walk between the railway station and the Larapinta intersection are unreadable, observing that “tourism plays a major role in the economy of Alice Springs” and promising “more” in the next edition.

“This matter was raised over a year ago with Tourism Central Australia (TCM). Obviously nothing has been done about it,” says historian Alex Nelson.

He says he wrote to fellow history buff David Hewitt on January 14, 2018: “It just so happens that one of the few legible signs along that walk provides details of the contributors to that project which was officially opened a decade ago this year.

“I photographed all of the panels along that walk in the early morning of Christmas eve [2017] three weeks ago. I’ve attached a few examples near Larapinta Drive, which is where the sign acknowledging the project contributors is located.

“The pathway itself is well maintained but contrasts oddly with all the panels upon which most display signs are in appalling condition.

“Just why it’s allowed to get to this state is beyond me, it certainly shows no respect for visitors on the Ghan who may choose to walk this way.

“However, the names provided on the sign in the first two attached photos could help to find the original artwork that hopefully is still kept on file. I don’t think there is any excuse to allow this situation to continue much longer.”

Also on January 14 last year TCA chairperson Dale McIver emailed Mr Hewitt (copy to her TCA CEO Stephen Schwer): “Do you have any further information on these signs, such as who may have designed and installed them originally and where the information was sourced from? If we can find a starting point this will assist in looking at getting them replaced?”

Mr Schwer’s contribution on January 15, 2018 was an email to Mr Hewitt: “If you ever find a grant fund that funds signage and includes ongoing maintenance, please let me know, as it makes sense, but I’ve never seen it before!! Sad but true.”

Mr Nelson emailed Mr Schwer on the following day, saying the “Discovery Walkway” was opened in late May 2008 and – including the decorative fence on the boundary with the Stuart Highway – cost $720,000.

“That’s a significant investment of funds so adds to the case of restoring the information panels along the walkway,” Mr Nelson said.