Heatwaves need to be treated as emergencies: Cr Cocking 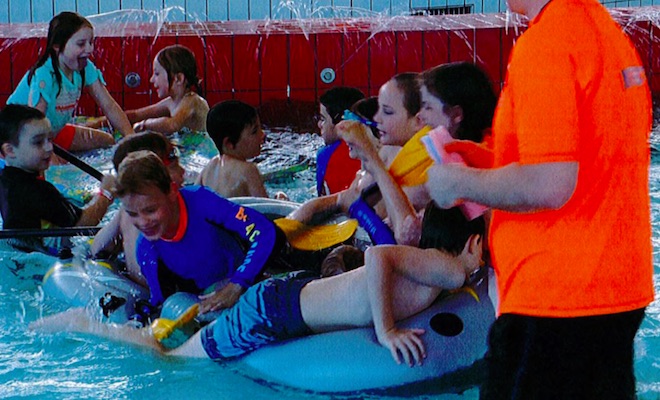 Above: Escaping the sustained heat during January, youngsters enjoy the town pool. Photo from the monthly report to the Town Council by the Alice Springs Aquatic and Leisure Centre. There were 2,290 more visits to the pool this January than in the same month last year.

Unlike for floods and fires, heatwaves are not treated as an emergency in the Northern Territory.

This is despite acknowledgement by the Northern Territory Emergency Service that heatwaves are “perhaps our most under-rated and least studied natural hazard”.

A statement on their web page continues:

“During the 20th century, heatwaves have probably caused more deaths in Australia than any other natural hazard.  A single heatwave in southern Australia once resulted in 437 deaths and seriously affected many thousands.  Heat can also cause expensive livestock and crop losses, as well as damage to roads, railways, bridges, etc.”

During the record-breaking heatwave this summer in Central Australia – 15 consecutive days with temperatures over 42 – government response was limited to advice, for example, on the Emergency Service and Secure NT web pages and a Secure NT alert on Facebook, says Councillor Jimmy Cocking.

He thinks it’s time that changed.

At last night’s Town Council committees meeting, he proposed a motion on the issue to take to the Local Government Association of the NT ( LGANT) meeting in April; deadline for motions, 22 February.

It was straightforward: “That LGANT call on the Northern Territory Government to support the development of Emergency Management Plans for heatwaves to reduce the risk to life and livelihoods in both regional and urban areas.”

Such plans are developed under the Emergency Management Act, he explained. They become a tool for government services under the Act, kicking in when the emergency occurs.

Emergency is defined in the Act as “an event that requires a significant coordinated response using the combined resources of the Territory and non-government entities within the Territory”.

Emergency plans are provided for in the Act at Territory-wide, regional and local area levels. 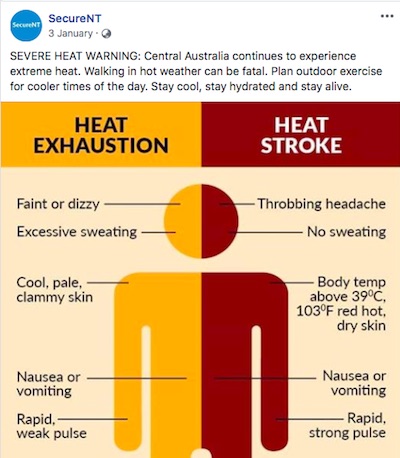 Other jurisdictions have plans for responding to heatwaves as emergencies. Cr Cocking provided examples from Victoria and NSW, both with a focus on local government responses and both acknowledging the potentially fatal consequences of heatwaves.

In Victoria, for example, an unprecedented statewide heatwave in January 2009 led to 374 additional deaths in comparison to same period in the previous five years.

Left: Facebook advice from Secure NT during the heatwave.

People particularly at risk in a heatwave, as the NT Emergency Service points out, are “young children; the elderly; those with alcohol, weight or health problems; and people on medications/drugs that have a drying effect or reduce perspiration.”

Both the Victorian and NSW guidelines also pointed to the expected increase in the frequency and intensity of periods of extreme heat across Australia in the future.

“The record breaking heatwaves this summer in Central Australia has seen at least one person perish and an unknown number of people suffer heat stress throughout December and January,” said Cr Cocking in the notes to his motion.

“The Northern Territory has a large disparity between Territorians’ capacity to cool their homes. Many people have suffered this summer without air conditioning and some without even having fans.

“The increasing threat of regular and intensified heatwaves will exacerbate existing social, health, economic and ecological issues faced by Territorians.

“Local government is a key service provider to communities in the Territory and has a duty to act under the Local Government Act to reduce the risks of hazards to the community.

“Heatwaves are predicted to increase in both intensity and duration across Australia and particularly in Central and Northern Australia as our climate continues to be damaged by increasing concentrations of greenhouse gases emitted from the burning of fossil fuels.

“It is almost certain that the Northern Territory will continue to have record breaking heatwaves until emissions are reined in globally.

“Heatwaves in other jurisdictions have been the subject of municipal level emergency planning and management responses, not so in the NT.

“The Northern Territory is on the frontline of global warming as we all have felt this summer. Local communities and visitors to the NT will benefit from action taken to reduce the risk to life from increasing intensity and duration of heatwaves which are predicted to occur with high degrees of certainty.”

Sounds like a no-brainer to try to get action on this, as one step towards the adaptations that all communities and jurisdictions  are going to have to make. But Cr Cocking encountered resistance.

Mayor Damien Ryan, who is president of LGANT, couldn’t see how the motion would fit in with existing LGANT policy, referring particularly to LGANT policy statement 7.12 on Climate Change.

(b) LGANT acknowledges that:
• there is still debate and uncertainty with existing climate change science
• uncertainty is not a reason for inaction or delay of action
• the “Precautionary Principle” should be included in any consideration of climate change science.
(c) LGANT supports councils addressing climate change in their strategic planning frameworks because of the legal, indemnity, budgetary, asset management, infrastructure, planning and environmental implications for councils.
(d) LGANT calls upon the Federal and Territory governments to develop appropriate policy and legislative frameworks to allow councils to make decisions and responses to climate change without prejudice or undue risk exposure.
(e) LGANT supports councils receiving appropriate levels of funding and resourcing assistance to meet urgent climate change mitigation and adaptation requirements for the short and long term protection and benefit of their communities.

Mayor Ryan saw Cr Cocking’s motion as more appropriate for health services. He repeated that it needed to work in with existing LGANT policies, especially regarding climate change and adaptation to it.

He said the motion talked about plans, but his concern was that it didn’t give direction. He would support it if it made reference to policy 7.12.

Deputy Mayor Matt Paterson took the common sense step of suggesting the addition of that reference to the motion, and Cr Glen Auricht suggested adding also the words “and resource funding”.

Although he didn’t agree with everything Cr Cocking had said, Cr Auricht said he would support the motion.

Cr Jacinta Price, however, said she could not support it on the basis of the following sentence in the notes: “It is almost certain that the Northern Territory will continue to have record breaking heatwaves until emissions are reined in globally.” That, she said,  was based on “an assumption”.

Voting of course was on the motion, not the notes, as Cr Eli Melky pointed out, but Cr Cocking said he was happy to withdraw the sentence if that would get Cr Price’s vote.

He needed unanimous support for the motion to go forward on the basis of a vote at a committee meeting, necessary in this case because of the deadline for motions. (At Ordinary meetings, a majority will do.) He finally got it.

Cr Jamie de Brenni from the chair, who had said earlier that he favoured discussion of the issue by LGANT, congratulated the room: “I think that is a good outcome.”