Police have “grave concerns” for the welfare of Harold Morton, 44 (pictured) who walked out of the Ampilatwatja community on Friday morning apparently without having had breakfast nor taken any water with him.

Acting Superintendent Michael Potts told media this morning that Mr Morton frequently takes walks but always comes back within one or two hours to attend to his mother who has a medical condition.

He is not known to stay away for an extended time.

Mr Morton is a skilled bushman and “accomplished hunter” but the extremely hot conditions are putting him at risk. 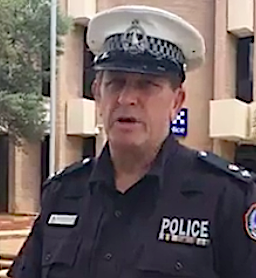 Supt Potts (pictured) says community members have tracked Mr Morton to a location some 4.5 kilometres from the community on the Murray Downs Road where they lost the tracks after light local rainfall.

In company with police, emergency service personnel and a helicopter pilot, the local residents are now broadening the search area where the tracks had been lost, north-north-east of the community.

Supt Potts says Mr Morton does not have a mobile phone, there is no suggestion that anyone else is with him but it is possible he had spoken to family members in Alice Springs about his intentions.

If that is the case those people should urgently come forward, says Supt Potts.

Police have suspended the search for a man reported missing from the remote community of Ampilatwatja late last week.

Aerial and ground searches of the community and surrounding areas during the past four days are yet to locate Harold Morton.

“Sadly our extensive search efforts that have been dedicated to finding Harold will be returned to normal front line police duties, unless further information indicating Harold’s location were to become available.”

“At this stage due to the extreme weather conditions in the region, our hopes of finding Mr Morton alive and in good health are diminishing.”