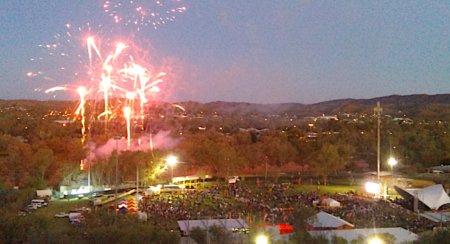 Anzac Oval moved further out of reach of the Northern Territory Government at last Tuesday’s council meeting, with councillors unanimously declining the government’s offer to buy it, and a majority supporting an application to declare it permanently a heritage place.

Nicole Manison, as Acting Minister for Infrastructure, Planning and Logistics, in a letter dated December 24, 2018 but received by council on January 7, had offered the council up to $5m for the oval, with a view to using the land for its proposed National Aboriginal Art Gallery.

When council met on January 10 to consider that offer, a letter from Central Arrernte traditional owners, dated January 9, was tabled by Councillor Eli Melky. It stated that the group of traditional owners, “recognised by all Arrernte people as the true Apmereke-artweye for the central part of Alice Springs,” did not support the use of Anzac Oval site for that purpose.

This letter included the signature of Benedict Stevens, until then the only named custodian in support of the gallery being built on the Anzac site.

The letter expressed strong support for the gallery at a different, culturally appropriate location.

At Tuesday’s meeting, Mayor Damien Ryan proposed that council write to Ms Manison that they are not in a position to accept the offer, having listened to traditional owners on the matter.

Cr Melky initially urged a more strongly worded letter to counter the government’s criticism of the council’s lack of leadership on the issue, and referring also to the 1100 signatures from the general public opposed to transitioning the oval to the government.

Mayor Ryan argued that his proposed message was sufficient, as council still wants to work with the government on other issues.

Cr Jamie de Brenni moved a motion to write a letter to that effect, seconded Cr Catherine Satour, and it was supported unanimously.

On the oval’s heritage listing, Deputy Mayor Matt Paterson was in the chair, Mayor Ryan and Cr de Brenni having left the chamber, the latter due to the nominator of the application being his brother-in-law, Alex Nelson, representing a possible conflict of interest.

Cr Jacinta Price was not at the meeting, being on personal leave. That left five councillors in the chamber and Cr Marli Banks attending the meeting by phone.

Council, as the owner of the site, had been asked to comment on the application by Heritage Council chairman Wayne Kraft.

The discussion was brief. Councillors one by one stated their support for the application, making a few minor queries or general comments. Director of Technical Services Scott Allen told councillors that if the application were successful that council would need to write conservation management plan for the site (and follow it).

Deputy Mayor Paterson, however, asked to have it noted in the minutes that he did not support the heritage listing motion, although he had said nothing by way of argument against it.

Facebook
Twitter
Pinterest
WhatsApp
Previous articleMake Oz Day a celebration of the future, not the past
Next articleHorses to be culled, dead ones left for sun to 'do its work'