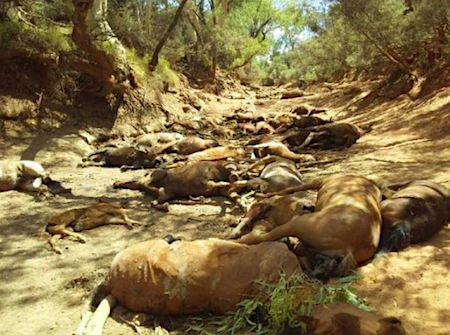 This text is from the Facebook site of Rohan Smyth and the photo is by Ralph Turner.

The Eastern Arrernte community of Ltyentye Apurte (Santa Teresa) is reeling after a shock discovery earlier this week.

Community members drove out to Deep Hole near Judges Head, around 20 km northeast of Santa Teresa on January 20 to check the water the level in the a natural water reservoir.

The party were anticipating the water in Deep Hole to be low as a result of the recent heat wave which has seen average temperatures around the mid-forties for a number of weeks, however nothing could have prepared the group for grisly reality that awaited them.

Not only was Deep Hole completely dry with barely any signs of recent mud, but revealed a horrific mass grave of wild horses stretching for around 100 metres.

The horses are believed to have entered Deep Hole to drink from the reservoir which has not been known to completely dry up.

The family of wild horses, including Orreea (stallions), Marla (mares), and Ambaa-Agooga (foals) are likely to have perished from dehydration accompanied by the overwhelming heat.
Many community members are now deeply concerned about the welfare of the local wild horse population.

The community is also concerned with the prospect of the rotting carcasses polluting Deep Hole and other local waterways in the future.

The prospect of any living creatures perishing in this way has left many locals devastated.

All feral animals need to be managed with effective strategies to minimise their impact on the environment and to alleviate any suffering.

This event, along with other recent instances of mass animal deaths, including recent fish deaths in the Riverina, calls the community to wonder what steps are our leaders taking to tackle the effects of climate change in the future and what steps [can] we all take to prevent the suffering of innocent animals across our country.

It is also consulting with another remote community about an emergency cull.

Horses and other feral animals are dying of thirst and hunger because many reliable water sources, such as Apwerte Uyerreme, have dried up in the current heatwave and areas overpopulated by feral animals suffer erosion and vegetation loss.

As horse carcasses foul water holes that native animals depend on these, too, die.

The CLC and its constituents are very concerned about both feral and native animals in the current heat wave.

On Monday, CLC staff spoke with residents and traditional owners of another remote community where feral horses, donkeys and camels are dying of thirst.

Around 120 animals there are watering from a trough near the community and are in too poor a condition for mustering and transport.

The CLC received consent to undertake an aerial cull from those it consulted and scheduled an emergency cull for Friday, 25 January.

However, it has since learned that some residents are opposed to this.

It will therefore hold a community meeting today where government animal welfare officers will also be present.

“Before a cull it is important to get the informed consent of the traditional owners of the Aboriginal land trusts we support,” said CLC director David Ross.

“However in emergencies, such as last week in Ltyentye Apurte, we will go ahead without consent if necessary.

“With climate change well and truly upon us, we expect these emergencies to occur with increasing frequency and nobody is truly prepared and resourced to respond to them.”

Mr Ross said the CLC is helping traditional owners to prevent them by developing management plans with the four large Indigenous protected areas (IPAs) in its region.

“Aboriginal land trusts, unlike IPAs, lack the resources to develop such plans,” he said.

“That’s why we are pleased that the NT government has committed funds for us to develop ‘Healthy Country’ management plans over the next two years in areas across multiple land tenures, plans that include ranger groups operating in the Tennant Creek, Ti Tree, Ntaria (Hermannsburg) and Ltyentye Apurte regions.”

Next Wednesday, 30 January, the CLC will hold a meeting at Ltyentye Apurte to discuss last week’s cull, how to assist the Santa Teresa Aboriginal Land Trust to dispose of the carcasses and how to avoid mass animal deaths as the climate gets hotter.