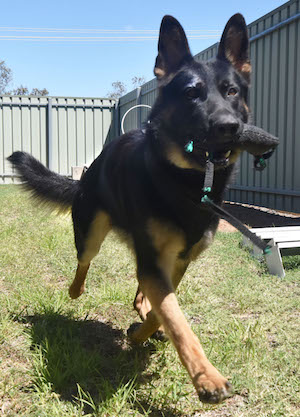 Around 6:30pm a woman reported to police that her car keys had been stolen from her bag while she was swimming at the aquatic centre.

Officers observed the vehicle being driven recklessly in the CBD area and around midnight successfully deployed a tyre deflation device.

The vehicle eventually stopped on Palm Circuit and two girls, aged 15 and 16 fled on foot.

They were arrested shortly after by frontline police and police dog Loki who has figured prominently in the clearing up of recent offences (google him on this site).

In a separate incident, police were notified of an unlawful entry of a building on Gregory Terrace around 2am.

Further investigations indicated unknown offenders unlawfully entered and ransacked the building before stealing the keys to a Toyota Hilux.

Offenders used the vehicle to ram through the security gate, and it was later observed by members driving recklessly around the CBD area.

Frontline officers and Loki located two of the occupants from the vehicle hiding in nearby bushland.

The two boys will be considered for youth diversion and the two girls will face charges of stealing a motor vehicle and appear before court at a later date.