More than 400 enthusiasts for classic and modern rally cars are in town to test their skills on bush roads in the Lasseters Classic Outback Trial.

They are doing out-and-return stages each day from Alice Springs, covering some 2,500 kilometres over seven days.

“Initially born as a long-distance rally for classic cars, in recent years there has been a growing interest from competitors with modern competition vehicles to take on Australia’s Red Centre epic event,” say the organisers.

There are some 35 special stages, ranging in length from five to 70 kilometres, and offering a great variety of challenges from fast flat roads to tight technical rugged mountainous roads.

New for 2018 is a tagalong tour for 4WD and AWD SUVs, a non-competitive opportunity to explore and experience the Outback following selected stages used in the previous days’ competition, with four nights of camping.

The event will climax with a presentation night on Saturday.

PHOTO: Melbourne based team Joel Wald and Kim Begolhole had their 1979 Datsun Stanza painted with a traditional motif by Charmaine Pwerle, from Utopia. The idea grew out of a chance meeting with NT cattleman and director of Delmore Gallery, Don Holt, after the trial in 2016. He also commissioned the artist to create two additional paintings on linen to be auctioned at presentation night, with all proceeds to be donated to The Purple House dialysis NGO which is soon to open a clinic in Ms Pwerle’s traditional country. 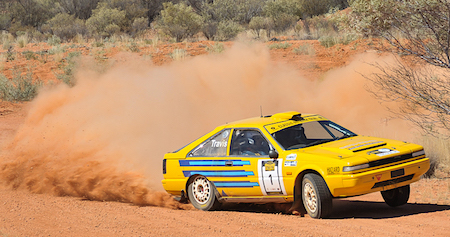 Bathurst son and father combination, Andrew and David Travis (pictured) claimed a third consecutive Classic Outback Trial and fourth in five attempts after winning the 2018 edition by more than nine minutes at the weekend.