Northern development is getting cracking – slowly

IMAGES from the websites of the the Humpty Doo barramundi farm, above, and the marine support base at Onslow in WA, below.

When Northern Development, which spans the Top End of the nation, turned three years old with a convention in Alice Springs this week, it had a lot of ideas and enthusiasm but not a great deal of achievement on the ground.

Its massive $5b bucket of loan money is still 99.52% full: The only two projects approved so far are a marine support base at Onslow in WA ($16.8m) and the Humpty Doo barramundi farm ($7.2m).

But Mark Coffey, an ex-police officer in Alice Springs who now heads up the Australian Government’s Office of Northern Australia, says since the White Paper was released in 2015, governments have made 51 commitments, including the $5b loan facility managed by the Northern Australia Infrastructure Facility (NAIF).

Its loans need to be paid back so the recipients need to turn a dollar. NAIF’s lending, at conditions more favourable than available from the conventional lenders, is one arm of Northern Development. A Commonwealth grant program is the other. These don’t have to be repaid and range from roads to water feasibility studies. A $176m grant for a dam in Rockhampton is an example.

“If the Northern Territory government also wanted a dam they could also apply,” says Mr Coffey.

That could come in handy if the NT government and the Alice Springs Town Council ever get around to making a decision on flood mitigation in Alice Springs.

To get to where Northern Development is now, legislation had to be enacted which took 12 months, says Mr Coffey.

Then a board had to be put together, made up of experts in infrastructure to assess applications for loans.

There are 20 projects now in the “due diligence” phase. They are confidential so as not to disclose information that may harm the applicants. 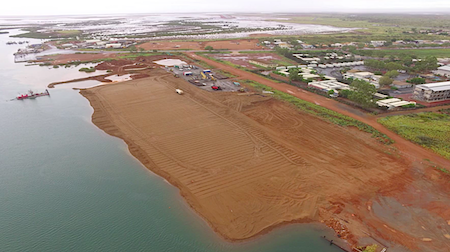 “What I can say is that there are some projects in the south of the Territory that are actively engaging with government to get their projects up and running.”


He also says: “It has taken a while but infrastructure projects in the north are difficult, they are high-risk, they do take time to get them to a point of financial closure.

“But land is reasonably cheap. For example our cattle industry is more productive than down south. It costs less to make a beast ready for market – so why wouldn’t you be in the north, be it for live export or boxed beef?”

While all of the NT is part of the Developing Northern Australia initiative,  is Alice Springs less likely to be favoured in applications because it’s on the southern edge of the region?

“No,” says Mr Coffey. “NAIF’s investment mandate talks about a project being in the north or it needs to benefit the north.”

He says the results of the convention include “a renewed commitment to develop the North”.

He says NT Chief Minister Michael Gunner, addressing the convention yesterday, said “that they are on board and they are really happy with the governance mechanism”.

It was set up with Federal Minister Matt Canavan (who appeared at the conference by video), “having discussions with the three state ministers for northern development … trying to get people on the same page … a shared agenda, moving forward”.

After three years, should there not be more tangible benefits?

That, of course, has always been a function of the Commonwealth, for major roads across the nation. Are some of these projects now being re-badged as Developing Northern Australia initiatives?

Mr Coffey says the current $700m for Northern Australia roads and beef roads, including $222m for the NT, is new money.

An example is the Outback Way – the east-west road link via Alice Springs – for which “there is additional funding coming on stream for the next few years”.

However, there is still no deadline for the completion of that road’s seal. The Commonwealth has committed $330m to this road – on top of the $222m.

Food, agriculture and tropical health are the focus for the Cooperative Research Centre attached to Northern Development: “How do we get more productive beef?” is one of its enquiries.

The convention demonstrated that “the highest levels of governments are working together,” says Mr Coffey.

The Defence White Paper has come out in the NAIF’s three years, with significant activity across the north in the next 20 years.

Mr Gunner said in his address that Defence will invest $20b in the next 20 years in the Northern Territory, and the USA is forecast to spend $1b by 2025-26.

He said Pine Gap in Alice Springs is a “template to how we work cooperatively and to mutual benefit with our allies”.

Rather than going cap in hand to the Commonwealth and the US and asking for projects, there should be a growing local defence industry, with oil and gas playing a role.

Mr Coffey says the objective now is about “defence being willing to work with local industry” which will require “local businesses to improve their capability”.

For example, offshore patrol vessels are now being serviced in Singapore or Perth, but a slipway big enough for them is proposed for Darwin.

All that, of course, will be focussed on the Top End where most of the military action is.

But in The Centre, upgrading of the Jindalee over the horizon radar is a major project: “That’s the sort of work that, if I was a local, I would be trying to get into,” says Mr Coffey.

Water feasibility studies are also on the Northern Development agenda. There has been criticism in The Centre about the inadequacies of water resource assessments by governments, and in some instances mining companies have been more active and successful than the governments.

Where the opportunities for irrigated agriculture are is on the agenda, says Mr Coffey, and so is using water for other industries, including genetically modified crops.

“At the moment we are not doing much down here in Alice,” he says. “We’re doing a lot in the Top End, around Darwin … and the Katherine-Daly regions, and the Ord.”

That raises the question, how can local lobbies – the Town Council, for example, or the Chamber of Commerce – influence the decision making and spending by Northern Development?

“It’s all about taking advantage of the competitive benefits that a place might have,” says Mr Coffey. “Pointing them out.”

In Alice Springs, “tourism springs to mind. How can we benefit it? Is it additional flights, is it accommodation, is it better products? Is there anything from the Commonwealth’s point of view that we can do?”

To get NAIF hooked “it needs to be a well developed proposal”.

How many of these have they had from the Central Australian region?

The region is already punching well over its weight, and Indigenous people need to participate, Mr Gunner said: 50% of the land and 80% of the coast in the Territory are owned by Aborigines who make up one-third of the population.

In North Australia, 5% of the Australian population are creating 12% of the GDP and half of the nation’s exports.

In Central Australia, five mining ventures will spend an estimated $2.2b on capital works and create 1000 jobs.

“Just imagine what we could do if we had more people living here,” Mr Gunner said.

So, this week 320 delegates (40% from the NT, 30% Queensland, 20% WA) from governments, NGOs, business and academia strutted their stuff, networked and presented a mosaic of topics ranging from “Connected Competitive Clusters – Developing Collaborations Across the Value Chain” to “Coconut – An Ideal Crop for Northern Australia”.

They’re all seeking a slice of the action for their business, their passion, their patch in the North from where a couple of billion potential customers aren’t all that much further away than Australia’s main population centres in the other direction.