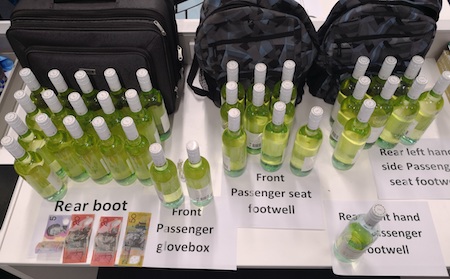 Three women aged 47,  29 and 25 were arrested for  secondary supply of alcohol yesterday.

Alice Springs police say using surveillance and information received from members of the public the three women were observed selling alcohol from a vehicle at various locations across Alice Springs in the past week.

Yesterday they observed the offenders selling multiple bottles of wine outside a business before driving off. Officers stopped the vehicle and found 35 bottles of white wine and a quantity of cash.

The trio will be charged with multiple counts of sale of liquor not authorised by a license and supplying liquor in a general restricted area.

The suspects will be issued banned drinkers orders.

The vehicle has been seized and police will seek its forfeiture due to its involvement in the commission of these offences, says a police spokeswoman.

Acting Senior Sergeant Danny Bell says it will be alleged the women were highly organised and were targeting vulnerable members in the community, “effectively selling commercial quantities of alcohol.

“It is a serious offence to sell liquor without a licence, currently attracting a penalty of up to 12 months imprisonment and a substantial fine.

“Police will continue to use all available resources and strategies to target these offences and will seek maximum penalties for those prosecuted.

“Offenders also risk of having all items involved in such offences, including motor vehicles, seized.

“Those looking to engage in this criminal activity must also consider the increased penalties announced by the NT Government last month, with the maximum penalty to be increased to a $46,200 fine and three years imprisonment later in 2018,” says A/Snr Sgt Bell.

“We encourage everyone to report all suspected instances of illicit alcohol sales by calling Crime Stoppers on 1800 333 000.”