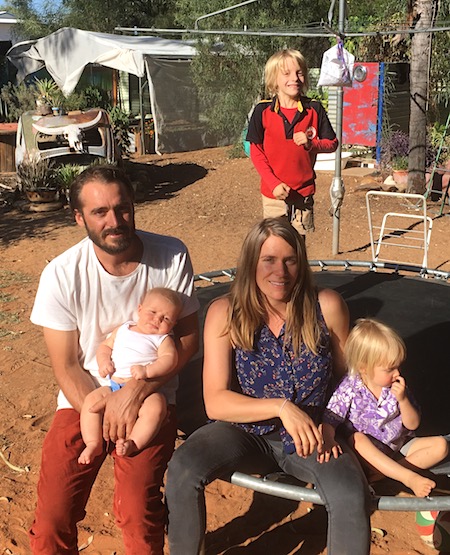 Stephie Harrison has three boys. The eldest started primary school last year. She says: “If Indigenous kids can’t get to know non-Indigenous kids, how can we have a harmonious community when they grow up?”

Ms Harrison, who lives in The Gap, and her friends are grappling with the problem of black kids gravitating towards some government schools and white kids away from them, many into the private sector. Zoning, she says, isn’t helping.

The pinnacle of the issue is Ross Park Primary School, where everyone seems to want their kids to go. Its feeder area (see orange boundary) would be a prime example of a gerrymander if the boundaries were for a political electorate.

Ms Harrison points out that this “priority enrolment area” includes old Eastside and all of the up-market Golf Course Estate and Mt Johns area, although they are half the town away from Ross Park. The zone includes no town camps, although the Charles Creek one is nearby. Gillen Primary School, mostly Aboriginal, has five town camps attached to it.

Sadadeen Primary is about the same distance from the wealthy suburbs, and much closer if the road past the Ron Goodin power station – soon to be closed – were open for traffic.

It is owned by Power Water which is 100% owned by the NT Government so it is de-facto public land. The road is usually opened when the Todd floods.

The Sadadeen and Ross Park schools are within a kilometre of each-other.

Furthermore, the Mt Johns area, at least a good part of it, is closer to Gillen Primary School than Ross Park.

Both Sadadeen and Gillen students are predominantly Aboriginal.

Says Ms Harrison: “Sadadeen has seen a dramatic reduction in non-Indigenous families attending the school. In 2009, 57% of the school identified as Indigenous. In 2017 it was at 90%.”

Department of Eduction Regional Director Trevor Read says “enrolment management and priority policies” are in place for Ross Park, Bradshaw and Larapinta schools at the moment because they are all above 85% capacity.

This means kids living in the respective designated zones are guaranteed enrolment but others have to go on a waiting list.

He says the zones are defined “geographically, based on forward estimates of students and families living in the area”.

About 2000 primary school kids in Alice Springs are enrolled in public schools.

The total number for the three private schools – Our Lady of the Sacred Heart, Living Waters Lutheran School, Steiner School – is about 1000.

The zoning system was put in place a few years ago and is checked “every couple of years”. All government schools have zones but some are not activated, says Mr Read.

The boundaries are set “generally” on the distance from the school but also depends “on the area and the number of houses within that area”.

But Ms Harrison, quoting from the very informative MySchool website, says other factors need to be taken into account, with the Index of Community Socio-Educational Advantage (ICSEA) a key factor. 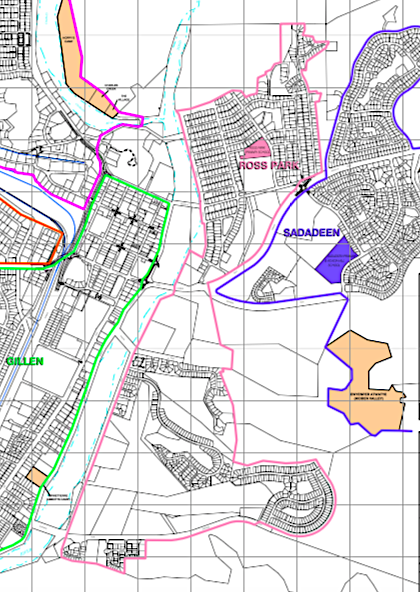 That makes Ross Park the only primary school in Alice Springs above the national average of 1000.

“Many students at Sadadeen come from town camps (Hidden Valley and White Gums), experience high rates of childhood trauma, and live in some of the most socially and economically unjust suburbs in Australia,” says Ms Harrison.

The die is clearly cast for these children: “Students from the lower socio-economic schools – Sadadeen, Gillen and Braitling – mainly feed into Centralian Middle School (CMS), she says.

“CMS is the only public middle school in Alice Springs. The effect of all the low socio-economic schools feeding students into one school is immense.

Money clearly talks. Mr Harrison says the median property price for houses selling in Desert Springs is currently $708,750, and in Eastside is $527,500.

PHOTO at top: Stephie Harrison, pictured with partner Jack Batty and children Tanami (6), Max (2) and Louie (3 months) in their back yard in The Gap.