Breadth and depth in Alice Prize – show and winner 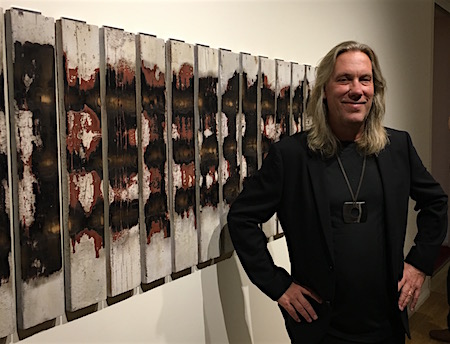 Brian Ritchie trembled in his boots when he discovered judging the Alice Prize was going to be a solo act. He’d assumed he would be part of a committee where you can always blame someone else for an unpopular choice.

Left: Brian Ritchie with the winning work, White Wash Over The Burn by Robert Andrew.

Still the Violent Femmes punk rocker took it in his stride. As the curator of music in what many people think is the world’s best, or at least most exciting, contemporary art museum, Tasmania’s MONA, he is deeply embedded in contemporary art every day. He is also familiar with Central Australia, having visited since the 1980s pursuing his keen interest in Aboriginal art and returning annually over the last few years to mentor musicians taking part in the Bush Bands Bash.

As Alice Prize judge, he is out of the mould – past judges have tended to be the directors of the state public art galleries. Interestingly this Alice Prize, the 40th, also feels fresh, invigorated. That might have something to do with a strong process by the selection panel, appointed by the Alice Springs Art Foundation, the 48-year-old community organisation behind the prize.  The panel – Kelli Cole, Luke Scholes, Cassandra Lehman – did a “kickass job”, to use Ritchie’s words, bringing together “one of the widest-ranging, most comprehensive and exhaustive examples of Australian contemporary art that you will ever see”.

To get there they culled the 500+ entries down to 53 works. Apart from the quality of their choices, that number is about 10 fewer than normal, giving each work plenty of room to breathe in the astute hang across two galleries – a credit to Araluen curator Stephen Williamson and visual arts officer Tim Chatwin.

Once Ritchie had gained an overall impression of the show, his judging became “more a sorting out of principles than trying to rank the work”.  He rejects the idea of “better or best”.  Rather there was “something I’m going to choose”, not on the basis of a simple personal response but in the context of this particular national prize and the quandaries it brings into the room, especially by imposing no boundaries whatsoever – works can be in any medium, about any subject and by any body calling Australia home. 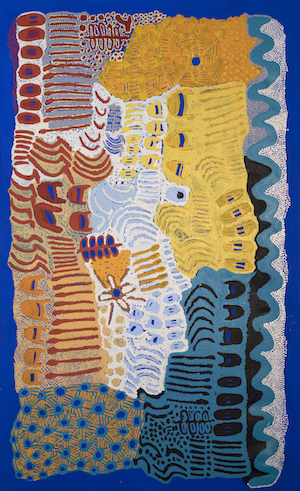 Over its history, one of its strengths has been to juxtapose Indigenous and non-Indigenous art. This has become more complex with the development of Indigenous art using a contemporary visual language, often by artists living in urban contexts, in contrast to a more traditional one. This can also be seen as part of a broader urban versus rural divide.

As well, Ritchie mentioned the notion of outsiders and insiders – that is, artists who have not had access to higher education, in contrast to academically and professionally trained artists: “I tend towards favouring outsiders even though I come from a museum where we work with both types.”

In his speech on opening night, the first examples of  “visceral, explosive” imagery to which Ritchie said he gave strong consideration were probably from his ‘outsider’ category: Marapinti by Katjarra Butler, Hunting at Haasts Bluff by Doris Bush Nungarrayi (at left), and Wallaby by Matthew Clarke.

The first two are Aboriginal artists from remote desert communities, while Clarke is from outside Warrnambool in Victoria. In his artist profile he says of himself that he is an artist with a disability. (I take Ritchie’s point about academic training, although all these artists to various degrees have benefited from training or artistic development and support, the former through their art centres, Tjarlirli Art and Papunya Tjupi, and the latter through the Victorian TAFE system and representation by private galleries.)


Earlier, in a walkthrough with me, Ritchie went straight to the highly produced video work, RED, by Del Kathryn Barton, which will undoubtedly have a strong impact for many viewers. With the feel of an erotic horror movie, star Cate Blanchett orgasmically writhes as she brandishes scissors, cutting away her clothing, this juxtaposed with scenes of red-back spiders in acts of sexual cannibalism, the male actually assisting the female to consume him. Barton’s statement speaks about celebrating “radiant maternal power” in a radical reimagining of a number of non-Western creation myths. Reviews have spoken of “genre-busting” although Blanchett’s central figure is surely in a direct line of descent from fatally seductive feminine archetypes of many cultures and wholly within the Vamp trope of our times.

Nonetheless, it is a compelling experience and takes Barton’s art “to a different place”, as Ritchie said (Barton is best known for her painting). In the context of his judging framework for the show as a whole, however, it was an “outlier”: “The production values are astronomical. No other artist in this show would have access to that talent team” or that finance.

While not mentioning it specifically in his opening speech, RED no doubt counted for Ritchie among a number of works by women that made their mark in this show in ways that might not have been seen in earlier decades of the Alice Prize.

He was interesting about the “high energy” presence of women in the contemporary Australian art scene generally, speculating on it being related to the prominence of female Aboriginal artists – “perhaps a higher percentage of female artists than in any other art boom in human history. It may have rubbed off on the rest of the country.” 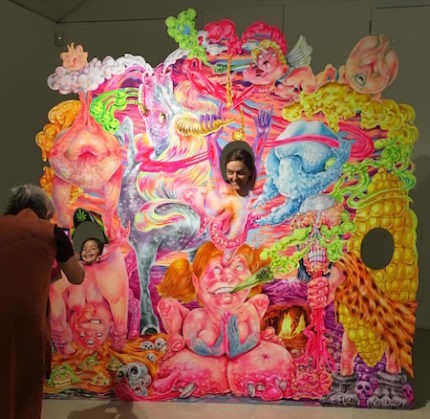 These artists are all women, as are those he mentioned in relation to radical uses of media, from the retro, such as Alice Blanch’s 1930s camera work (A Shifting Stillness), to the brand new, such as the “very impressive” use of a 3D pen by J9 Stanton (Hammer and Lace), and 3D X-ray by Erica Seccombe (Christmas Beetle). Women in fact make up well over half the exhibitors in this show.

He spoke of “process art”, giving the example of Suzi Lyon’s My Town, whose “moving”  engagement with the local community had yielded “fascinating” results. Lyon, a long-time Alice Springs artist, sat in different parts of the town, asking passers-by if she could push a small lump of porcelain clay into the palm of their hand. No-one refused. This produced a host of shell-like forms, no single one like the other but all sharing something of a common character. These she has assembled on an X-ray lightbox, which reveals the fine palm prints on each piece of translucent porcelain, the intimate traces of many encounters, together expressing the bonds of the collective.

Finally it came to announcing and speaking of the winning work. Ritchie was skilful in doing this without giving too much away, wanting viewers to encounter the work for themselves because “great art has an immediate impact but then reveals itself further the more you look into it.”

Holding back its title and the name of the artist right to the end, he spoke of its beauty, suggestive of the Japanese Wabisabi aesthetic – the beauty found in decay – but deceptively so, as the artist took very powerful steps to achieve that appearance, from which the story of his piece emerges. 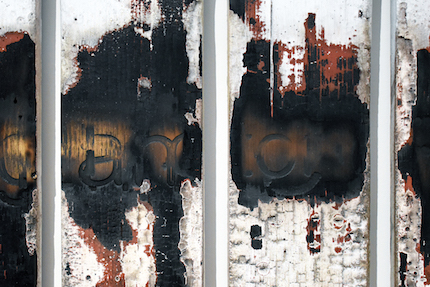 “In a sense the work survives because of a performance,” said Ritchie, a performance which he described as “a kind of exorcism”.

“There is a scream in this work but it is a suppressed scream. The artist has given the viewer freedom to engage with it on their own terms.”

A detail view of the work,  White Wash Over The Burn by Robert Andrew, is at left.

In our walkthrough Ritchie had asked me what I thought this work was about before looking at it closely, taking in its title or reading its artist’s statement. I saw in its boards the suggestion of a fence, in its rusty ochres, Australia, the land not the nation – so a work about colonisation.

Up closer, the burn of the title is apparent. Cut into the timbers you can see the remnants of text which combined with the burn suggest a painful, effaced story – the “suppressed scream”. The artist’s statement fills in with some brief detail: the text comes from the repeated applications by the artist’s Yawuru great-grandmother for citizenship, and their denials; the timbers were taken from his colonial era house in Brisbane, cut from trees pre-dating colonisation.

Ritchie was initially attracted to the work by its beauty as an object, then became more and more drawn in by the way it “epitomises the Australian story”.

We had been discussing the pitfalls of didacticism: “If art is too local, it can’t achieve posterity,” he said.”You don’t know what is going to happen in the future that is going to effect things differently. At the same time, artists have a right, even an obligation some would say, to speak out on issues, especially if they effect them or their people.

“It’s a very difficult one, usually only resolved by great artistry.”

This is what Andrew had achieved: a fully resolved work, “its own world”, yet able to speak to future generations and beyond our shores, poetically and powerfully, in emotionally and intellectually satisfying ways.

“It has many of the elements that make this whole show interesting,” said Ritchie. “The story-telling element, the social message, the use of unusual materials, the unorthodox mixture of modern and antique media, reflecting Australia.  A lot of works have addressed things head on, while he has brought threads together from oblique angles, resolving them all.

“In many ways this work summarises the width and depth of Australian contemporary art practice.”


PHOTOS from opening night by Kieran Finnane; all other photos courtesy the artists and Araluen Arts Centre.


Below, in descending order: a still from RED by Del Kathryn Barton • detail of My Town by Suzi Lyon • A Shifting Stillness by Alice Blanch • White Wash Over The Burn by Robert Andrew • Cowboy Story by Jimmy Pompey. 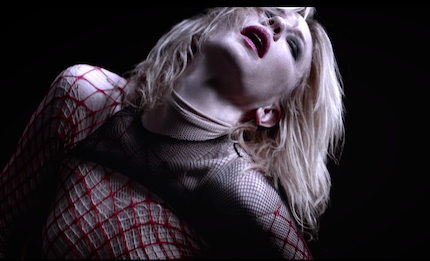