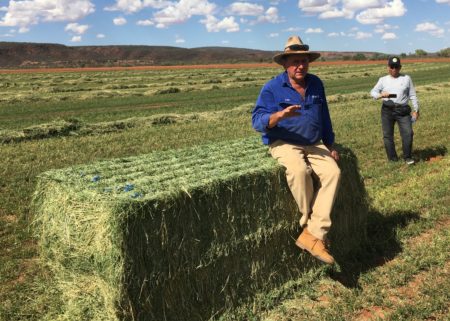 Wally Klein at Orange Creek cattle station can grow 100 bales of lucerne hay weighing half a tonne each, eight to 10 times a year on 11 hectares using his centre pivot irrigation system.

Running cattle on his 2400 square kilometre station is at the rate of two head per square kilometre. As weaners, 18 months old, they are worth, at today’s prices, around $600 each.

That puts the annual earnings per square kilometre (back-of-the envelope calculation) at $800 for grazing and just over $2m for growing fodder – a cool 2500 times as much.

That also puts into stark perspective the NT Government’s new policy of allowing diversification on pastoral leases which to date permit only free-range grazing.

Applied to roughly half of the Territory’s landmass this has the potential of hugely boosting the NT’s $23.6b Gross State Product to which pastoralism, at the moment, contributes a mere $1b.

Interestingly, the other half of the NT’s landmass is owned under freehold by Aboriginal people. 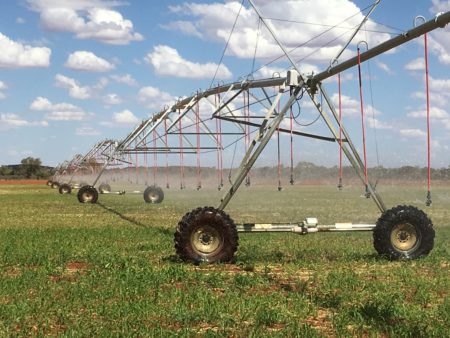 Their land never had the use restrictions which the pastoral leases had but somehow, in 40 years of land rights, this hasn’t translated into the kind of bonanza that the cattlemen are looking forward to now.

All this comes on the back of a pretty good 2017 season when the ducks were in line for the industry: The property market was booming, and although a bit patchy, there was good rainfall. And cattle prices were high.

It hasn’t been as good as this since 2007, just before the Great Recession, says James Christian, Business Development Officer (Innovation) of the NT Cattlemen’s Association which has its annual meeting in Alice Springs today.

There is a “the sky’s the limit” spirit amongst the people under the big hats at the Convention Centre, branching out from grazing cattle into growing fodder, perhaps market gardening for human consumption and – who knows – eco-tourism. However, some Ts have yet to be crossed and Is dotted. 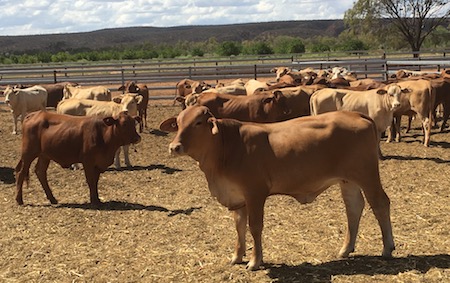 Diversification has been a reality there since 1980 when the irrigation started, but this could only happen because the watered plots are freehold land, not leasehold, like most cattle land.

Mr Klein’s operation is an ambitious forerunner to what is set to unfold across rural NT: His dream is “beef from paddock to plate” from his property, usually running 4000 head, and may soon include a slaughter house producing meat for the Alice market, bush communities and roadhouses.

They are brought in from bush grazing at about age two and get fattened up in the station’s own feed lot, using lucerne, sorghum, oats and wheat growing in the two irrigated patches on the station.

Mr Klein rotates the crop, and also includes wheat and potatoes for sale “down south”. The rotation is designed to replenish elements in the ground which the preceding crop has taken out.

Mr Klein says he can grow practically everything – so long as he can get a bigger water allocation.

And here is the amazing fact: He says despite substantial use of the underground water – 370 tonnes of plants were grown since last November, for example – the water level in the aquifer has not dropped at all in nearly three decades. 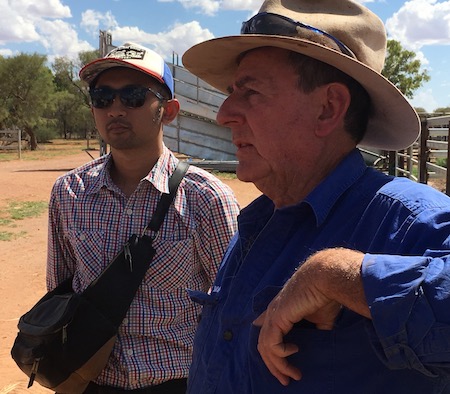 Mr Christian says the NTCA is developing sound policies that protect the interests of all stakeholders.

An industry source says the diversification rules are still being worked out. For example, will pastoralists be allowed to lease out land for enterprises to third parties?

It seems that the lease holder will need to be a partner.

Government permission to embark on a production venture on the leased land may depend on the viability of the scheme. But how do you know it will work unless you try? How can you try without getting money from the bank which will lend only on the evidence of the project being feasible?

It’s a chicken and egg scenario, says the source.

PHOTOS: Wally Klein on Orange Creek station with a half-tonne bale of lucerne hay • One of the two centre pivot irrigation systems • Part of the herd in the feed lot • Mr Klein with a visitor from Indonesia.