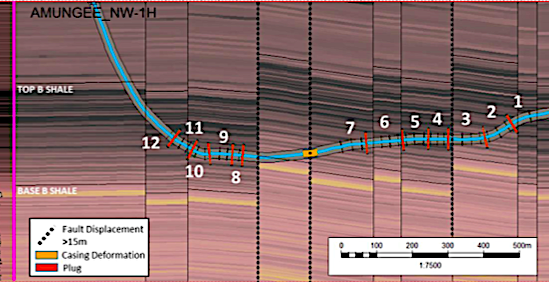 A spokesman for Origin Energy says the anti-fracking Lock the Gate Alliance was misleading the public when it claimed that a pipe “deformation” amounted to a failure of the well in the NT’s Beetaloo field.

Christopher Zipf says there was no risk to the safety of the public nor the environment.

The claims and counter claims featured in the fracking enquiry last week: Lock the Gate spokeswoman Naomi Hogan described the deformation as a “casing failure”.

She said in a media release on February 6: “Lock the Gate can reveal today that Origin Energy erased all evidence of a frack well casing deformation in a submission to the NT Fracking Inquiry, making the draft Final Report a false account.

“Lock the Gate is calling for a full investigation of Origin’s conduct, including how the NT Government and the NT Fracking Inquiry came to be implicated  in the cover up.”

However, it was revealed that Origin had provided diagrams both showing (pictured) and not showing the deformation, to the NT Government as well as the inquiry.

The government released a statement that it had not misled the inquiry.

We are seeking comment from inquiry chairwoman, Judge Rachel Pepper, on why the diagram that didn’t show the deformation was used in her draft final report.

Judge Pepper said last week: “Lock the Gate has yet to apologise to Origin and indeed to this inquiry.”

Mr Zipf, when asked by the Alice Springs News Online, explained how a fracking job was conducted in a well.

The well has two distinct sections, initially drilled vertically into the ground and when the shale is struck, proceeding horizontally.

It is the horizontal section where the fracking takes place: “Plugs” are inserted to control and contain each fracking stage, and between them the pipe is perforated and the fracking fluid is inserted under high pressure.

Once a stage is completed a new plug is inserted and the process is repeated, moving bit by bit back towards the vertical pipe.

Mr Zipf says the make-ups of the vertical and horizontal pipes are distinctly different: “The vertical section has multiple barriers, with multiple casings, steel and cement.

“It’s part of the technical process to ensure the integrity of that well. It’s essential to seal off all the underground layers and prevents the connection between aquifers. We test using gear like an ultrasound and we check that it is right before fracking commences.”

The horizontal part of the well pipe does not have the same barriers or armour of the vertical one. It’s designed to be perforated during fracking to allow gas to flow into the well. The vertical section is not, it’s job is to provide “a secure pathway for the gas to flow to the surface,” Mr Zipf says.

“The deformation occurred in the horizontal pipe. It has no impact on well safety, integrity or the environment. These events are not uncommon during fracture stimulation and Origin says its designs included plans to deal with it in the event it did happen.”

This is how he described pipe deformations: “It can be as simple as the underground pressure altering the shape of the pipe slightly to make it a bit more oval, or there might be a little crick, or a kink in it, or it might have a tiny crack. We’re talking in a scale of millimetres here. You’re in a part of the well where you are actually designing to perforate.”

Mr Zipf says the fact that the deformation was discovered is proof of the precision and controls applied to fracking operations.

Statement from Origin Energy:
Lock the Gate apologises for false allegations made to the NT Scientific Inquiry

Lock the Gate has formally apologised for the false allegations it made to the Scientific Inquiry into Hydraulic Fracturing in the Northern Territory last week that sought to undermine the integrity of the Inquiry and deliberately damage Origin’s reputation.

In seeking an apology from Lock the Gate’s spokesperson Naomi Hogan, Inquiry Chair, The Honourable Justice Pepper, wrote: “Given the scandalous nature of your allegations against Origin and the Inquiry which have now been proven to be wholly incorrect, it remains a matter of considerable concern that no apology has been proffered by you, on behalf of Lock the Gate, to Origin or the Inquiry. Failure to do so has the very real effect of impugning the credibility of yourself and Lock the Gate.”

Origin welcomes the apology that has now been made to the Inquiry and looks forward to receiving a similar apology from Lock the Gate as requested by the Inquiry: “The Inquiry notes and accepts your apology. It is assumed that you have also, as is appropriate, apologised to Origin Energy (Origin) directly.”

Origin also notes the two Lock the Gate media statements containing the false allegations, now proven to be wholly inco rrect, are yet to be taken down from their website.

Head of Origin’s Integrated Gas business, Mark Schubert, said Origin respects the right of any organisation or member of the community to express their views on such an important topic.

“We understand some people will have different views on gas development and we welcome a healthy debate – but it must be truthful, and not driven by false information as witnessed by the NT Fracking Inquiry last week,” Mr Schubert said.