Passing of the Namatjira matriarch 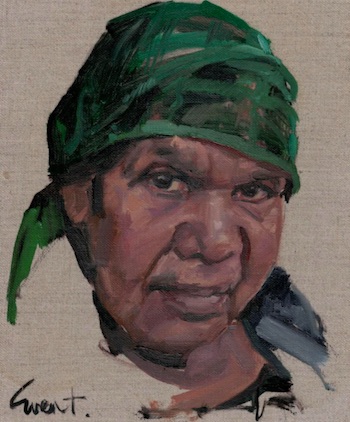 Just six short days after the Namatjira copyright victory, one of the principal figures in the fight for its return to her family passed away. Kumantjai L Namatjira was also a fine painter, one of the foremost in the second generation of watercolour artists represented by Iltja Ntjarra Many Hands Art Centre.

She was Albert Namatjira’s granddaughter, daughter to his son Oscar, who was an artist too, in the footsteps of his father. Born in 1951 at Raggatt’s Well near Glen Helen, Kumantjai grew up with her nine siblings at Hermannsburg (Ntaria). Her childhood memories in this country were often the inspiration for her work.

Kumantjai was the mother of Theo, Melissa, Trevor and Kumantjai G Namatjira, a grandmother and great grandmother to many, matriarch of the Namatjira family.

The recent film, Namatjira Project, recorded one of the highlights of her life, which was to meet the Queen as had her illustrious grandfather. The film also showed her commitment to the transmission of the watercolour tradition to younger generations.

Her passing was announced today by Iltja Ntjarra Many Hands Art Centre, who described the copyright victory as “bittersweet” but hoped that it had “provided her with great relief”:  “She has left a great legacy.”

A combined funeral service for Kumantjai and her son will be held at Ntaria Lutheran Church on 14 November at 10am. The family has requested that public tributes follow after the funeral.

Image: This portrait of the late artist by Evert Ploeg accompanied today’s announcement by Iltja Ntjarra Many Hands Art Centre. Mr Ploeg travelled with Big hArt’s  theatre production, Namatjira, every night on stage completing a portrait of actor Trevor Jameson, who played Albert Namatjira. At the end of the tour he presented a portrait to each of the Many Hands artists who had travelled with the show, as a thank you gift.