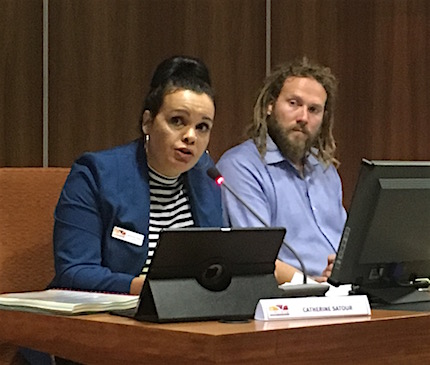 She wants a reconciliation action plan for day, in line with the National Australia Day Council Reconciliation Action Plan, and to have a “smoking ceremony alongside a welcome to Country as part of a healing initiative”.

This is her alternative to the Change the Date approach adopted by some interstate councils and raised as a ‘green scare’ during the recent election campaign.

Rather than changing the date she wants instead to strengthen relationships between Arrernte people as “the original custodians of Mbantua” and “all other members of our community who also wish to live in Alice Springs”.

“It is important to learn of our past history, make relevant long-term strategic efforts to improve our present and build a better future, moving together as one community,” she said.

Cr Jacinta Price, in the chair, queried the use of a smoking ceremony in this context. Traditionally, she said, smoking was used for newborn babies, when someone had passed away and for specific healing, involving the use of medicinal plants. She wanted to consider what else could be done to contribute to Australia Day, although she did not make a suggestion.

“You’re correct”, said Cr Satour, but she understood that traditionally smoking was also used as “a blessing”.

Debate on the motion brought to light that council has a draft Reconciliation Action Plan, which was initiated by Cr Price but has languished in very much preliminary form for some time. Mayor Ryan urged that it be brought back for councillors to work on.

The show of hands in support of Cr Satour’s motion was unanimous. 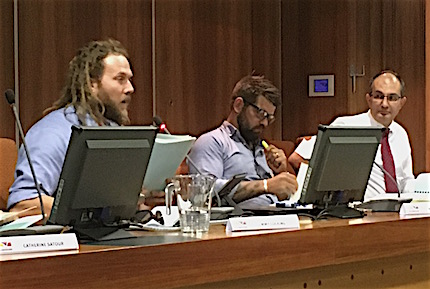 Cr Cocking’s motion was sweeping in its scope. He wants to see “a long-term, integrated Master Plan for Alice Springs”. It would draw on the numerous existing plans  and fresh consultation to provide a “unifying narrative or vision for Alice Springs”, connecting the dots between all the various plans and agencies working on them.

He provided councillors with a non-exhaustive list of existing plans, some from within council including its own Strategic Plan (itself a topic of debate last night), some from within the NT Government, others with the Planning Commission, and yet more with bodies like his own Arid Lands Environment Centre and Tourism Central Australia.

The key would be “integration”, he argued, producing lasting improvements for the town that would be greater than the sum of the individual plans.

His motion suggested that council initiate the process. Cr Matt Paterson, also a new councillor, agreed that a Master Plan is needed but wanted to see the motion talk about involvement of the NT and Australian governments.  He also questioned Cr Cocking’s reference to the plan having a vision for “the surrounding region”, as councillors represent only the ratepayers of Alice Springs.

These points were supported by Deputy Mayor Jamie de Brenni and Mayor Ryan. Planning for the whole region might more successfully be undertaken by the Regional Economic Development Committee, they argued, and there has already been discussion in that committee about doing this. Mayor Ryan also told the meeting of moves afoot among CEOs of all four councils in the southern region to form a Regional Organisation of Councils.

Cr Eli Melky suggested that the town’s role of regional hub would be captured anyway by the integration of all the other plans.

Cr Cocking accepted the amendments to his motion, dropping reference to the surrounding region and including an invitation to the NT Government. He was clearly pleased with the support for what was one of his key election campaign points.

Cr Melky was not so fortunate. There was no support from his colleagues for the motion that he brought to the chamber without a seconder. Readers may recall that Cr Melky was responsible for driving the previous council to pay off the Civic Centre loan, delivering a $100,000+ saving to council coffers.

This decision followed the adoption of council’s budget for 2017-18, which included amounts towards paying off the principal and interest on the loan. These amounts are now unallocated and Cr Melky wanted to have them reimbursed to ratepayers. An alternative to this, included in his motion, seems to describe the default position – that council decide on what to do with those funds – but Cr Melky wanted to ask the ratepayers to approve this. 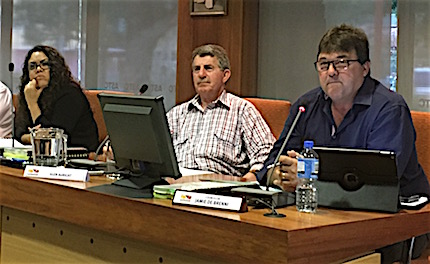 Cr Glen Auricht, another fresh councillor, wanted more information. Council’s Director of Finance, Dinesh Pillay, said he had a report for councillors relating to the budget and these unallocated funds in particular  which would be presented in the confidential section of the meeting.

Cr Melky said the unallocated amounts were clearly identified in the financial reports provided in the open section of the meeting: putting the debate into confidential “makes no sense to me”, he said.  But his colleagues did not agree.

The motion does not fail at committee stage. It will go forward to the full council meeting at the end of the month where it is possible, even if seeming unlikely, that it could win support.

• All councillors showed their keenness by rejecting the recommendation from the executive that they extend the Strategic Plan 2013-2017 until 31 March 2018.  Deputy Mayor de Brenni expressed his frustration that council is operating without a current strategic plan and at the suggested deferral of completing the new plan. Councillors were asked if they were willing to put aside time from 10am to 2pm on Saturdays to complete work on the new plan and they all agreed. 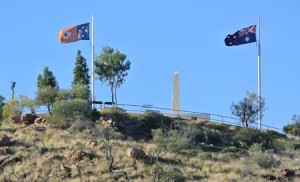 • Another long deferred decision of the previous council, on flying the Aboriginal flag on Anzac Hill, was again deferred, with Crs Satour and Paterson saying they needed to consult more with the public on the issue.

The debate continues to lack clarity on the purpose of flying the flag from this location. Is it to recognise the significance of the site to Arrernte people, which is quite separate from and predates anything to do with serving in the armed forces? Is it to more broadly acknowledge Arrernte people as the traditional owners of the land where the town has grown? Or is to recognise the participation of Aboriginal people in Australia’s armed conflicts? It would be useful for this to be made clear.

• A survey of cyclists in Todd Mall is being undertaken. People are not permitted under current by-laws to ride in the mall although many do; the by-law is clearly ineffective. Cr Cocking said the issue needs clarity, especially as there is now a bicycle rental business located in the mall. Director of Corporate and Community Services Skye Price says council needs thorough data: the survey will count how many cyclists are using the mall in a given period, including how many are riding compared to walking their bikes.