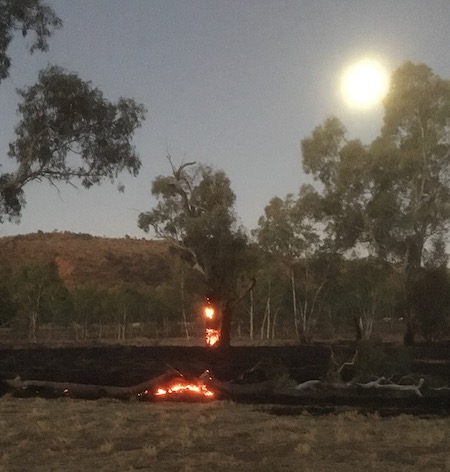 Has it not sunk in yet that people in Alice Springs, of all backgrounds, like trees?

So why has a small bushfire in the Todd River (dry, of course) been allowed to destroy several obviously healthy big gumtrees?

And all of five minute’s drive from the fire station?

Why have they been let to smoulder and burn days after the fire started? The tree at right, with a healthy crown of green leaves, was still burning last night (Sunday) and all day today embers were smouldering.

We’ve asked for an explanation (early Monday) and will report it when we get it.

At least 25 ignitions have occurred in the area just South of the Gap over the last two weeks. It is believed that these fires have been deliberately lit. Significant damage has occurred to a number of old river gums (some estimated to be over 200 years old) and unfortunately a number of these trees have not survived.

NTFRS crews have attended this area on numerous occasions in an attempt to mitigate the damage to the trees. Unfortunately, the heavy fuel loads of buffel grass on the ground acts as a wick. Once fire gets into the old river gums, they can be almost impossible to extinguish no matter how much water is applied, due to the hollow trunks funnelling the fire through the centre of the tree.

Members of the public are urged to report any suspicious activity immediately. Please pay particular attention to what the person seen lighting a fire is wearing, taking note of what he/she looks like. If a car is involved please note the registration, make, model and colour.

Please call 000 immediately if you see a fire in this area to ensure NTFRS crews are notified as soon as possible so they can attend – the earlier the intervention, the less likelihood of there being any major damage.

David Woods contributed the photo below.

Why does Araluen hold is openings and other functions in its sausage-shaped lobby where you’re looking at the back of people’s heads while trying to catch a glimpse of the speakers and performers? 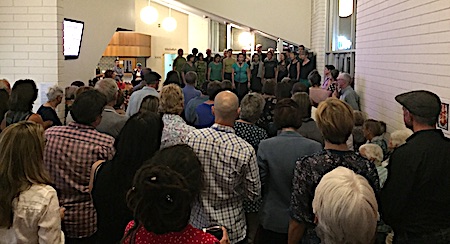 That sure was the case at the opening of the senior Territorians portraits show on Friday.

The photo at left was taken with mobile phone held by arms stretched over-head.

The centre has a great auditorium with 500 seats, and the facility to deploy a curtain that reduces it to about half of that. Araluen also has Witchetty’s, big enough to hold the usual openings crowd and featuring a stage, chairs and a bar.

Don’t sell your house. You’re in paradise already – well, almost. The fantastic seven months of the year in The Centre have started.

It doesn’t get much better: Cool nights, warm days, zero pollution, hardly any traffic lights, the least likelihood of a cyclone (we’re more than 1500 kms to the nearest ocean), no tsunamis (we’re 600 metres above sea level), and while a great slab of this continent is just getting over massive inundations, we are, well, here’s the snag: If the storm that hit Kintore at the start of this year had fallen in the Todd catchment area just north of the town, fatalities would have been likely and the CBD would have been turned into a disaster zone. We would have been worse off than the Queensland coast and northern NSW. 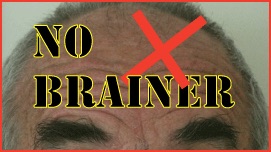 The committee put out one report calling for a string of other reports, and also recommends to “test structural mitigation options and their associated cost benefits with a new digital flood model to identify measures that will provide the greatest effect by either reducing the number of properties impacted, the extent of the impact and/or the frequency of flood events. Measures include detention basins in the upper catchments and assessment on the effects of causeways in the Todd River and the options to mitigate these effects.”

What’s the time line? With climate change bearing down on the world, there seems a remarkable lack of urgency: Once all the reports are in, whenever that will be, “the outcome of the assessment should inform a program of Capital Works to be funded by government over a five to 10 year timeframe”.

How Wazza Snowdon ranks the job of looking after his electorate compared to his other gigs:

Got an idea for No Brainer? Feel free to email it to erwin@alicespringsnews.com.au