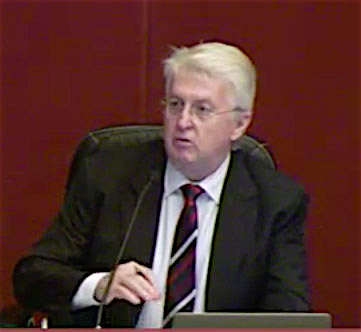 The process of initiation should be allowed to continue in detention, inmates should be able to attend ceremonies including funerals outside the prison, and psychologists or psychiatrists should be on hand to deal with distress such as being strip searched.

These are some of the recommendations put before the Royal Commission into the Protection and Detention of Children on Friday by Associate Professor John Rynne (pictured at the hearing), from the Griffith University in Brisbane.

He is currently “undertaking research in applied prison reform and organisational development via ‘through-the- gate’ approaches to prison rehabilitation and community re-entry,” in Australia and overseas, according to his website.

Counsel Assisting the Commission, Tony McAvoy SC asked Dr Rynne what “favourable qualitative factors” he could identify about the Territory’s juvenile detention system from listening to the evidence by the witness called BY and his grandmother on Thursday.

Dr Rynne:  “That witness was treated with no respect … during the whole process, as he described it. There was no humanity in the way he was held … being chained or handcuffed to the fence. There was a lack of total safety. He [was] getting numbness in his shoulder … the way that he was lifted is not a common control and restraint technique and certainly not … professional.

“His wellbeing was not looked after in any way – on the basis of that evidence.

Dr Rynne drew a sharp distinction between low and high quality prison systems: “Low prison quality means that the uptake of any benefit from prison will be minimal or harmful.”

With Indigenous prisoners “cultural competency” comes into play “for example [if] for some reason the person may not have been able to attend a funeral and that person then is sung and becomes traditionally sick. As a consequence of that, no western medicine is going to help that person heal.

“It needs a traditional healer to be able to come in and do what’s required to remove that traditional sickness,” Dr Rynne said.

“There are people in the juvenile institutions who will begin the process of being held or taken through law [initiation].

“If the institution doesn’t respect at what stage that person is being held, or taken through law, then it can cause incredible shame. And shame for Aboriginal people has far more consequences than shame for a non-indigenous person.

“For example, strip searching is one of the most shameful experiences that a person going through [Aboriginal] law can experience, or a person who has been through law.

“In fact, in a functioning juvenile detention centre the process of [Aboriginal] law can still be used or developed.

“There are two sets of rules for Aboriginal people in prison. There are the western rules, or the rules that the centre is run by, that they need to adhere to, and there are a second set of rules, and those are the traditional rules,” said Dr Rynne.

“So in taking one rule, if it could be pay-back or if a person is being humbugged, being asked to fulfil some requirement, then the traditional rule may override the western rule, which then could cause a breach.”

Should their attendance at ceremony be facilitated where possible? asked Mr McAvoy.

“Absolutely,” replied Dr Rynne. “Prisons are structurally racist and they continue the process of colonisation. We should be making every effort to make sure that we decolonise the process within our structures of government.

“Aboriginal … detainees should be … allowed to attend that ceremony. It can be done in the prison. It can be as simple as a yarning circle. There are a whole range of elements that can be done within the institution.”

Would he go so far as to say that detainees in the youth detention facility should be facilitated to return to country to participate in man-making ceremonies if that’s the appropriate time?

“Yes. If their growth is stunted, the consequence will be significant.”

Dr Rynne said prison staff being culturally aware is not sufficient. Cultural competence should be required. For example, in the event of a death,”a non-indigenous person will talk about their hopelessness and their sadness, their levels of just lack of motivation.

“Aboriginal people in particular talk about they feel sick in the stomach, they might hallucinate and hear the voice of the person that has died.”

Prison staff should make themselves aware of the cultural circumstances of prisoners: “If we want to be serious about cultural understanding we need to know what the song lines are; we need to know the dreaming stories.

“There are some absolutely marvellous officers in the Northern Territory system and other systems across the country that I have worked in.

“However, there are other officers who not only aren’t interested, they dismiss these factors and don’t or won’t even consider them being culturally competent or of any great importance.” 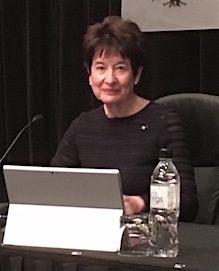 Commissioner Margaret White (pictured at left) asked Dr Rynne what makes the “marvellous officers” he mentioned: “Can they be told about the pointers to look for?”

Dr Rynne said: “Yes. They can. The Northern Territory have the best visiting elders program in the country … formed of elders and respected people from each of the different language groups, skin groups, or in some cases moieties.”

Problems can be as harmful as they are basic, often rooted in language. Commissioner Gooda said: “We heard yesterday about kids in detention being told just to speak English.”

Dr Rynne replied: “The first effect is that they struggle. It will be a form of pigeon English or Creole.

“And often what happens is the person just won’t talk. They will just go along with whatever has happened.

“So if they have a need, because they don’t want to be shamed or be embarrassed by not being able to get the words out, they will often not talk,” said Dr Rynne.

He gave an example: “A kadaitchaman, a witch doctor, healed a fellow … that was all done in language. This person had to be paid, which meant it was a commercial operation. He was paid with an old hat. So that broke a prison rule.”

Dr Rynne said interpreters should be with prisoners “from the moment they go to court.

“One of the things that just astonishes me is the number of people that are in the institution and have no idea why they are there.”

Dr Rynne says uncertainty is frequently the cause of trouble in prisons: “Prison riots occur because of administrative issues. People will live in the worst possible circumstances provided they know what’s going on.”

A detainee may disagree with a breach but they are more likely to accept it if  they know the reason of why it’s occurring: “Lack of information instantly causes inflammation and acting out … that could be the light to the fuse of a riot.

“Lack of information is perhaps the most important or the major cause of most administrative breaches,” said Dr Rynne.

“Prisons are social institutions. They work on relationships between people. There are bars and security, and handcuffs, but there are a lot more prisoners or detainees than there are officers. 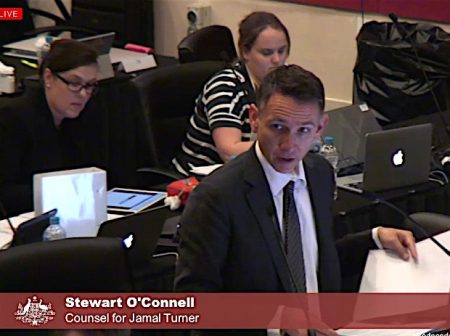 “Where those systems fall down or where they are not considered and where there is a punitive model … then there is going to be trouble.”

In cross-examination Mr Stewart O’Connell (pictured at left), acting for some young people who were in detention, asked Dr Rynne to comment on this: “One of the young people … was detained in isolation in a poorly lit and hot cell for a period of 17 days.”

Dr Rynne said the former Obama Administration in the USA made it illegal for any juvenile detainee to be put into solitary confinement at all.

In reply to a question from Commissioner White, Dr Rynne described as “beyond deplorable” cell conditions shown to the commission earlier in the proceedings.

Dr Rynne suggested that the effect of imprisonment on young people can be more serious that on adults.

“The juvenile brain, in particular the pre-frontal cortex, is … still maturing. It’s still processing information. Where there is complete sensory deprivation … it is just going to exacerbate the likelihood of post-traumatic stress disorder … hallucination is possible. Complete stunting of normal development. And suicide ideation to the extent of self-harm will be a likelihood,” he said

“Is there an agreed way of managing a person who is showing all the signs of attempted self-harm, suicide,” asked Commissioner White.

“If the person is acting out in their cell, if they are being violent, if they are spitting and attacking the staff, then with professional control and restraint techniques that person can be brought under control and then instantly there is a process and this occurs in three states that I’m aware of.

“Processes [will need to be] called into play from the moment the person is put into the cell … until they are seen by either psychologists, psychiatrists, or moved into a hospital.

“There is a new sort of cell … where they are in isolation but the front of the cell is completely clear … and there is a nurse on hand that can look at that person constantly … so it’s not as though they are just thrown down the back – I think the words were yesterday.”

He said: “Something that’s incredibly important to Aboriginal people is their contact with the land. When we put them in juvenile institutions we are removing them from their land. If they are going through [traditional] law, we remove them from those processes.

“If they hold positions of responsibility in their communities, we remove them from that … we lock them in a cell where they can see nothing. So they are completely vulnerable.”

Are governments resisting seeking solutions to these problems, Dr Rynne was asked.

He replied: “No. It’s interesting. The Northern Territory Government are one of the only two funding bodies in the country that fund my research. So they [are] aware of the importance of these issues.”

Asked whether there should be a specialised youth parole system Dr Rynne replied: “In my current position as Director of the Griffith Youth Forensic Service we deal with juvenile sex offenders and we get recidivism rates as low as 2.8% because of a parole system that allows us to work with juveniles in the community.

“A lot depends on the community that they are going back to. I believe that the visiting elders program is the strength of this [in] the Northern Territory [but] they are already overworked and they are already stretched beyond their capacity.

“But there are ways of building that program so it can be become part of the parole system and where young people are being held by … people that have traditional responsibility for them.

“So that could be integrated into the parole system, particularly for remote communities. It’s more difficult for city-based people because of the different attractions – alcohol, drugs, those problems that are less extensive out in the communities.”