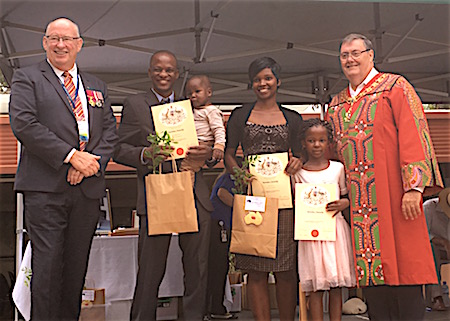 By ERWIN CHLANDA
The rain held off, the Town Council opened its doors, the flag was raised and 90 people from 25 countries became Australian citizens.
Among them were Wellington Daniel, his wife Egifa Dokwani, daughter Nakai Crystal Daniel and son Takudzwa Daniel, from Zimbabwe (pictured).
They received their certificates from Mayor Damien Ryan and Australia Day Ambassador for Alice Springs, Mr Allan Sparkes CV, VA, author and mental health advocate.

In a short while the 2017 Australia Day Awards will be presented to outstanding local achievers. 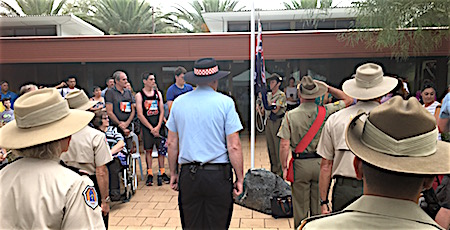 These “leaders in our community,” as described in a council statement, are:-

Andrea Mason is committed to generating just and fair access for Aboriginal people.

She has served as CEO of Ngaanyatjarra Pitjantjatjara Yankunytjatjara (NPY) Women’s Council since 2009. A relentless pursuit of equity is seen in her efforts as a leader, a policy maker, a social reformer, a negotiator, and an advocate. She has influenced significant positive changes in the lives of NPY women, and her achievements as a businesswoman have been recognised nationally.

Andrea is a shining representative of spirit and tenacity in our town. 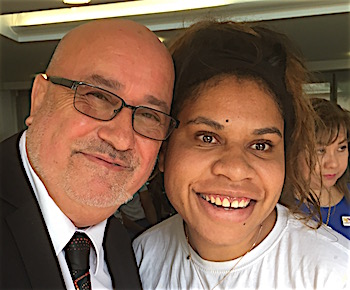 Cindy (pictured with 2016 Central Australian of the year, Gerry “G-Man” Lyons) is a highly active member of the community, contributing as a volunteer, advocate and student leader.

She was selected to attend the Australian National Student Leadership Forum in 2015, invited to Fiji for their Forum Bridging Initiative in 2016.

Cindy is persistently and continually available to lend a helping hand to those in need. 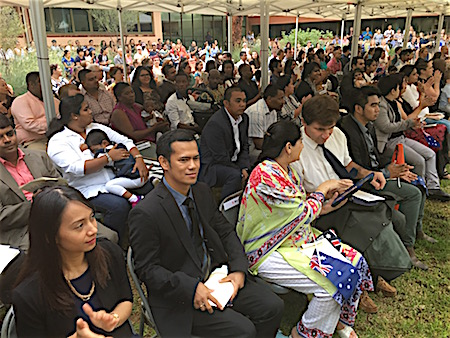 Claire Ryan is the current secretary of the Finke Desert Race Committee, after volunteering for the event from a very young age. Claire is known for being a strong leader of volunteers, and is a key part of what makes the Finke weekend work.

In addition, she annually coordinates local charity events, and also volunteers her time to organise the Alice Springs Masters Games.

This has been an annual event since 1988, one of the hallmarks of Alice Springs’ Australia Day celebrations.

In 2016 the event boasted 582 participants, from all ages, walks of life, and fitness levels. Bringing such a large diverse group together builds a sense of unity, a fitting event for Australia Day morning recognised by the Australia Day Council NT.

The initiative showcases the accessibility of healthy living in our community.

The award was accepted by Shane Cadan (pictured) on behalf of the club. He is its president 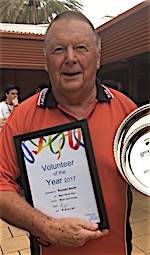 Volunteer of the Year – Russell North

He gives tirelessly to Alice Springs. Despite health issues, he has maintained a contagious positive attitude in giving his time and energy to a great number of community groups and charities.

Russell (pictured) is known for being a community-builder; glue that sticks people together, connecting fellow volunteers with worthy causes. Russell is happy to lead or follow, always ready to motivate others. He  makes an immeasurable contribution to our community.
Centralian Senior Citizen of the Year – Geoff Sloan

Geoff Sloan (at right) has had a long and distinguished career as a public servant in education and health, characterised by strong belief in equity and fairness.

While Geoff is no longer in paid employment, he continues to works tirelessly for his fellow Centralians. He continues to contribute to Northern Territory health policy, is an active member of the Connellan Trust Board, is the national senior representative to the Ministerial Advisory Council for Senior Territorians, a long serving member of Alice Springs Town Council’s Seniors Coordinating Committee, and voluntarily offers his time and skills to Alice Springs’ schools.

Geoff is regarded as a rolemodel among his peers, with generosity worthy of recognition.