Tasmanian skyrunner Hanny Allston and long-distance runner Kieran O’Brien from Brisbane have been crowned champions of Run Larapinta 2016, the four-day, four-stage running race along the most spectacular sections of the Larapinta Trail.

Meanwhile about 140 mountain bikers from across the country and overseas are arriving in Alice Springs for  six stages of epic mountain bike action in The Redback, from tomorrow to Sunday.

They finished at Glen Helen Gorge on Monday.

“It is tougher than I thought, I think I’d underestimated the roughness of the terrain in some areas, it’s so arid and rough out here, and you feel quite remote, so it has a different sense of difficulty I think,” Allston said.

“It’s just totally different to other events, the sense of satisfaction is pretty huge.” 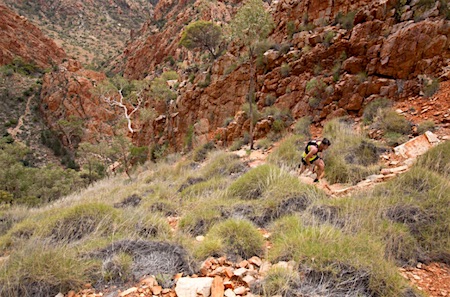 “I’ve never been to Alice before, it’s a lot hillier, and I thought the trails would be a lot easier,” O’Brien said.

“It was essentially a holiday, but it was just so nice to be around great people.”

The short course runners were led by local Bradley White with a total time of 8:16:48, followed by Benjamin Billy (Sydney) and 2015 winner Laurent Rossignol (Melbourne), who finished in 9:04:57 and 9:13:35, respectively.

Meanwhile the Redback provides six stages of some of the “most inspiring mountain biking Australia has to offer, racing along the jaw-dropping trails around Alice Springs,” says Rapid Ascent.

Cannonadale Enve team rider James Downing from Canberra has done the event for the past three years and will be returning in 2016 as an event ambassador, providing advice to newcomers to the event.

“Alice Springs absolutely rocks as a mountain bike destination with over 300km of the most awesome single track in the country.”

The six stages of The Redback are quite diverse, giving riders a really good cross section of terrain, riding style and landscape. The stages include cross country, a hill climb, individual time trial and a mind-blowing night race.

All races start and finish within rolling distance of Alice Springs so there’s no rental car or support crew necessary, and riders can choose to race just one stage, a few stages, or race them all.

This year The Redback coincides with Rotary’s Henley on Todd Regatta. Redback competitors are invited to participate in the exclusive Tour de Todd race as part of the dry regatta –involving teams of two racing in the Hamster Wheel as a relay on Saturday.