Too much sun power in Alice? 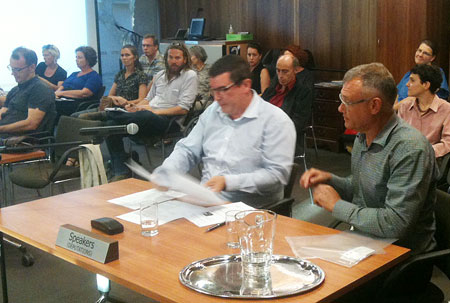 Mr Duigan (pictured, in the light shirt) told the Alice Springs Town Council last night that if another solar power plant, like Uterne, were built, without storage it would be “detrimental” to the network, affecting its stability. And using the storage technology available now would lead to a “dramatic” increase in energy costs, he said.

For Glenn Marshall, one of the RePower Alice lobby sitting in the public gallery, the news was a bombshell, but on reflection he says it should be seen as an opportunity. Until now the pro-solar movement had been focussed on getting greater solar penetration – more solar on rooftops, for instance. Now they know that the focus has to be on battery storage.

As for the costs issue, Mr Marshall says those involved in getting the Alice Solar City project going were faced with exactly the same argument in the early 2000s – that costs made solar prohibitive.

However, they continued to do the work and they were ready to go when in June 2004 the Australian Government announced its Solar Cities initiative. By the following year a consortium had been formed, in the next year it made its bid, and in April 2007 Alice Springs was announced as the country’s fifth Solar City. 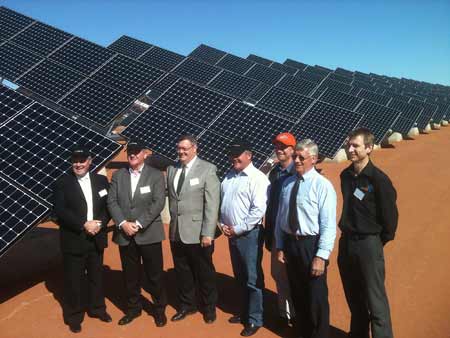 As a result of that project, Alice Springs is now “probably second to none” in Australia when it comes to penetration of solar, as Mr Duignan acknowledged. Combining rooftop and industrial installations the town has an estimated 10.6MW of solar PV capacity, which represents more than 40% of the town’s average annual demand.

Mr Duignan says Territory Generation continues “to explore innovative technologies” and will move to introduce battery storage as soon as it becomes commercially viable to do so.

As this is expected to be in the not too distant future, isn’t the town is being locked into gas-fired power generation by the current investment decisions, Cr Jade Kudrenko asked.

Mr Duignan said the opportunity for further use of solar would come with growth in the town’s population and increased energy demand, while Territory Generation is already investing a significant amount of money “to cope with” current solar capacity installed.

Mr Marshall asks why we would sit on our hands until the town grows. Why can’t a modest portion of the $75m be put into getting ourselves ready to adopt battery storage? Cr Chansey Paech also wanted to hear how much money, compared to the $75m, had been allocated to renewables.

Mr Marshall welcomed Mr Duignan’s announcement that Territory Generation is putting together “a roadmap” for its renewable energy strategies, which will be ready by the middle of this year.

He sees it as a chance for the former members of the Alice Solar City consortium, in which the Town Council took a leading role, to become “intimately involved”, including by setting the terms of reference for the roadmap, which should be towards a solar future.

To have too much solar is “a wonderful place to be in”, he says. The town now needs the investment in innovation to “take us to the next level”.