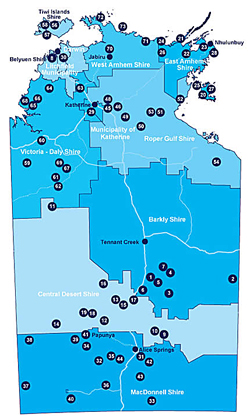 NT Worksafe said yesterday it had “commenced an investigation” into the removal of asbestos in Yuendumu after a complaint from a teacher, Margaret Murphy, and this afternoon advised that the investigation had been completed.

Ms Murphy had pointed out what she considered to be the lack of adequate precautions during work in homes and the community’s main store, putting locals and children at risk.

The Executive Director of NT Worksafe, Stephen Gelding, says: “NT Worksafe was notified of the asbestos removal by McMahons, which is a licensed asbestos removalist, as per work health and safety legislative requirements.

He did not respond to detailed allegations made by Ms Murphy, nor did McMahon’s Darwin manager, Mick Laidler.

Mr Laidler said: “Everything has been done in compliance with codes and legislation. Our guys always work with high levels of professionalism, over and above code and legislation. The allegations in this complaint are unfounded and not consistent with how the works are being executed.”

Mr Laidler says an independent hygienist was engaged by Coffey Projects and her report had “responded to all items in the complaint. As part of the project, the hygienist provides ongoing testing and clearance certificates for all properties where asbestos removal works take place.”

This was confirmed by NT Worksafe this afternoon.

Mr Laidler says the asbestos has been removed from the community in a manner prescribed by legislation for dumping in an authorised facility elsewhere.

Ms Murphy told the Alice Springs News Online that her knowledge of the issues came mainly from a briefing given by McMahons to local Aboriginal teaching staff on March 16, which she attended. She says she has detailed knowledge about work with asbestos as her two brothers have been working in the industry for many years.

She says it was clear to her that the staff did not fully understand the briefing and she pointed this out to the man giving it.

Ms Murphy says he then suggested to continue the briefing on another day but the asbestos work continued.

She says a number of problems were evident, from her own observation or from what she learned at the briefing:-

• Warning signs (similar to the one pictured) were in English, hard or impossible to understand by some locals.

• The “big shop” was open during the day when work was carried out at night.

• Children were playing on the work site at night in the dust and throwing pieces of asbestos around like frisbees.

• There was no safety fence, only a “stringline” with bright orange flags on it. “I would consider this to be an invitation to  children rather than a barrier,” says Ms Murphy.

• She says she was told it was too expensive to bring proper temporary fencing into the community.

“We were also told that works were being undertaken in houses,” says Ms Murphy.

“I asked where the families were relocated to when their homes were being worked on and was told ‘oh no, we work around them’.

“This is extremely concerning and against all safety regulations. This would not be happening in larger towns and cities,” says Ms Murphy.

“How can the workers – all Aboriginal women – be allowed to wear their contaminated gear back to the quarters shared with other workers before cleaning up?

“Do they dispose of their gear properly? Have they contaminated the other residents?”