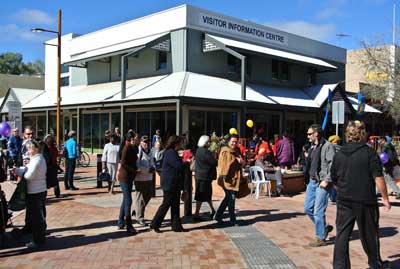 Right: The intersection of Todd Street North and Parsons Street, formerly shaded by The Sails.

Complaints about lack of shade in the area ­– redesigned and opened to traffic last year – has prompted council to look at costs of planting mature trees or installing additional shade structures.

A landscape architect worked with the original design team to develop a planting design including shade trees to mesh in with the moth shade structures. It would seem that design has not been followed or only partially. According to a report to officers from Works Manager Scott Allen “due to the timing and availability of species, 1.5 to two metre trees were planted”.

Mr Allen’s report described the sourcing and installing of either 10 or five metre trees as “a massive task” but proposed potential species for four metre trees: Tulipwood and Tuckeroo – described as “local” and “non-invasive” –  at a cost of $2000 to $2500 each.

Councillor Jade Kudrenko said she could not support the planting of these “rainforest trees”, especially given the work that had gone into the design of the area. “We’ve got to have native species” at least in the majority, she said.

Director of Technical Services Greg Buxton said it would be difficult to find a 10 metre mature and non-invasive local tree and suggested it might be more cost-effective to construct shade structures, either more “moths” as already installed or alternative “soft” structures.

Cr Steve Brown said he’d like to see photos of the proposed species and more options.

Mayor Damien Ryan said council should start growing its own trees so that they are to hand when needed. Cr Brendan Heenan supported this idea and also suggested that “semi-deciduous” varieties were needed in Todd Street North, to let in winter sun.

Cr Kylie Bonnani wanted to know if fruit trees and grapevines had been considered.

Cr Liz Martin said the plantings, including fruit trees, should be considered in the broader context of our cultural heritage: they could be used to tell some rich stories about this “special place”.

There was no mention during the discussion of seeking a landscape architect’s advice.