Why Alice Springs' own ocean beach is doing so well 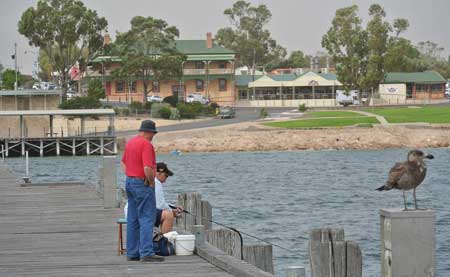 Both communities strive to make a good living from the spectacular beauty of their landscapes and other assets.

Alice Springs has the West MacDonnells, Ayers Rock and the vast desert and rangeland country around the town, for grazing and adventure.

Magnificent coastal scenery and fishing opportunities, amateur and professional, as well as broad acre grain farming and sheep grazing are the assets of Streaky Bay – regarded by the dozens of Alice locals who have blocks and shacks there as “our beach”.

However, when looking at wealth creation and managing lifestyle, our score cards are vastly different. Of course, Streaky Bay is unburdened by the complex racial and social mix of Alice Springs (and nor does it have its benefits, even if many of them are at present thwarted or under-realised.)

As the editor of the West Coast Sentinel newspaper for five years in the early ’70s, based in Streaky then, and as an occasional visitor since, I have a good opportunity of remembering what was great about that town 40 years ago, and how it has managed to embark on change to make it even better.

It was a farming community then almost exclusively, and tourism was a fairly new idea and not necessarily a welcome one.

I remember publishing in 1970, together with the Apex Club, the first tourist brochure, with local identity Bluey Campbell on the cover, holding a schnapper almost a meter long which he had caught from Back Beach on a hand line. 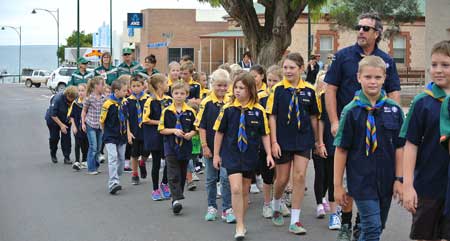 Tourism association president Graham Redding, who took over one of the two local supermarkets from his father and has now passed it on to his son, says there are still a few locals left who say: “Tourists take all our fish and ruin our roads.” But these are now very much in the minority. “Without tourism this town would not have as many shops,” says Mr Redding.

Industry groups on the West Coast collaborate rather than compete, promoting the variety of experiences, from whale watching at the head of the bight to camping in the picturesque Gawler Ranges and the endless coastal and boating pastimes of Streaky and Elliston.

The Streaky Bay District Council, a key player in most community affairs, matches up to a total of $5000 the $120 annual subs paid by tourism association members.

In four decades the town has grown to more than twice the size, but the population, 1200, has not: this is because many people come here, fall in love with the place, buy a block of land but may not build on it for years.

The Streaky Bay township has nearly as many rateable properties – about 1005 – as it has residents.
Holiday places only occasionally occupied, ranging from basic shacks to two storey mansions, are now dotted along the coast either side of the town. 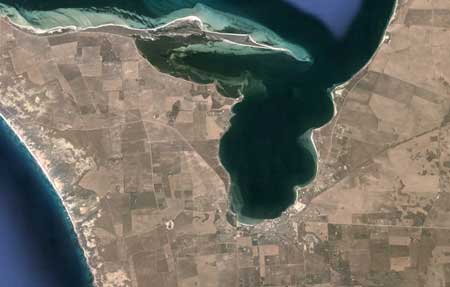 There are 285 vacant allotments (from which the council gets no rates at present) and 110 blocks owned by intending vendors (from whom the council does get rates. And so it does from block owners who have deferred construction).

At the current demand there is now enough developed land for the next 30 years.

None of this is keeping awake at night the Mayor of the district, Rob “Robco” Stephens, who arrived in 1980. He says the demand for land will bounce back to earlier levels, and fresh opportunities are around the corner.

Mining projects Centrex Metals and the Central Eyre Iron Project are taking shape, and the SA Government is looking for a site for a deep water port on the eastern coast of Eyre Peninsula.

And of course to the north is the giant Roxby mine where many farmer’s sons have found highly paid work, and are starting homes in Streaky.

No doubt people in the new mines will be looking for a nice place to spend their days off – and Streaky Bay is ready for them, says Mr Stephens.

And then, of course, there are the grey nomads: “They hear the story, they come, look and stay.”

It helps the industry that the council is in charge of land development applications, and when they are presented without flaws by the developer, they are granted in two to four weeks. Maybe the Territory could take some lessons here. That there is no native title in Streaky Bay is also bound to help. In the case of rezoning the process takes up to two years.

What hasn’t changed in Streaky Bay is the friendliness of the place. People you’ve never met say hello when they walk past you in the street.

One-fifth of the town turned out for the Anzac Day commemoration. The march, led by a handful of veterans, also included the “ambos”, emergency services volunteers and some 40 guides, scouts, cubs and joeys. 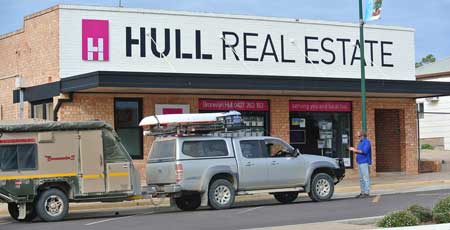 Nicknames are common: Boof, Gar, Johnno, Chunky, Schooner. Social life revolves around fishing, footy, cricket, netball, bowls, golf, tennis and having parties in the sprawling white sand hills lining the hundreds of kilometres of coast winding in and out of countless bays.

The Institute in the middle of town is still the place for 21st birthdays and weddings.

There is absolutely no public anti-social behaviour. Council CEO John Tillack, whose office in the old but immaculately maintained council chambers has one of Australia’s prettiest ocean views, says he turned his desk the other way to get some work done.

He recalls there were one or two drunks in evidence on New Year’s Day – but that’s about as bad as it gets. The district’s entire police force consists of three officers, two in Streaky Bay and one in Wirrulla, about 100 kilometers north on the Eyre Highway.

The council itself is unusually entrepreneurial: it developed 180 residential blocks and runs the hugely successful caravan park on Doctor’s Beach, across the road from the school.

With $1.7m from the Federal Regional Development Fund the council is now building a major sporting and entertainment complex at the footy oval, also catering for other sports including bowls, tennis and basketball, and providing a community hall. The total cost is $2m. Alice Springs s 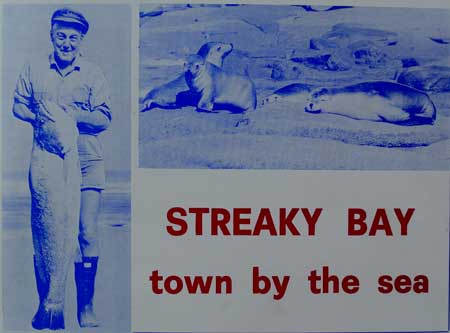 pent its RDF grant on revamping the rubbish dump.

The Streaky council has a budget of $8.9m and 21 “full time equivalent staff”. In the council’s rural area of 6232 square kilometers, 1000 people live on 1243 properties, mostly family owned. Most years they fill the white grain silos which are dominant feature of the Streaky Bay skyline.

While the alcohol debate in Alice Springs is going ’round in circles, the only pub in Streaky is community owned (it has a bottleshop and there’s another one in town as well). The community hotel contributes some $40,000 a year to local charities, selected by a board which includes Mayor Stephens.

Significantly, after a succession of farmers and graziers in the job, Mayor Stephens is a former real estate agent.

The streets of Streaky Bay were always tidy but now there is a touch of more money – neat lawns in public places, walking paths along the foreshore, the upgraded jetty and shark proof pool attached to it.

Most houses – including many in stone which are decades old, retirement places for prosperous farmers – have pretty front yards, with seats on the verandahs offering a view of the bay. High fences are relatively rare.

Clearly Streaky Bay doesn’t have a fairy godmother: it has worked hard and cleverly for its good fortune. The results can be seen in the numbers.

In the town of Alice Springs as well as the district of Streaky Bay, 46% of the population (that’s counting all men, women and children) are employed. *) The difference is where.

In Streaky Bay, 40% of employed people are producing stuff that can be sold – principally grain, lamb, seafood and tourism experiences.
That is a percentage of the population 5.5 times greater than in Alice Springs.

Now look at the labor segment that doesn’t produce commodities: In Alice, 17% work in law & order and 15% in health & social assistance.

The corresponding figures for Streaky Bay – town and district – are 4% and 10% respectively – one-third of the Alice statistics.

To match the two areas, comparing apples with apples, we need to include The Centre’s equivalent of what the Streaky Bay people call the district. That’s where the situation becomes absurd.

In the MacDonnell Shire only 21% of the population is employed. Of them 41% – three times the Streaky proportion – work in law & order and in health & social.

There are 6.3% in agriculture, 0.4 in mining and 7% in tourism (the region includes the Ayers Rock and King’s Canyon resorts).

Central Desert, where just 23% of the population has a job, is the basket case: tourism and agriculture employ 10% while 36% are in law & order and in health & social. 20% of the employed there work in mining which would be mostly the Granites which has a FiFo workforce mostly based outside the NT.

PHOTOS (from top): Up close and personal with the local wildlife • Fishing from the jetty with the Community Hotel in the background • Scouts and guides in the Anzac parade • Why the jetty points northwards to Alice Springs: Streaky Bay is at the southern end of Blanche Port • New residential developments on the outskirts of the old town • Checking out the offerings • The council chambers and the Institute (at left) and the Community Hotel • Grey nomads and young father at the council-run caravan park.